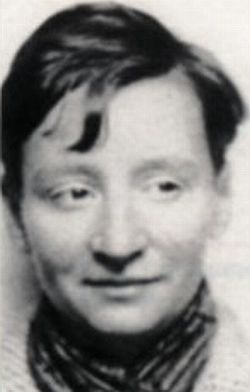 Gerda Rotermund (March 26, 1902 - October 21, 1982) was a German painter and graphic artist. The exhibition Lesbian Visions at the Schwules Museum from May 10 to August 20, 2018, brought into view artistic positions by queer FLT* (females, lesbians, trans) from over 100 years and displays works by more than 30 artists across six generations, including Gerda Rotermund.

She was a pupil of Max Slevogt and Emil Orlik, whose master student she became in the early 1920s. She was supported by Käthe Kollwitz. There is an exchange of letters between the two women until the wartime. On their travels to Yugoslavia, Italy and especially France, landscape impressions were created.

While still studying from 1922 to 1928, she made trips to Paris and Provence, together with Ellen Bernkopf, who she met in the sculpture class and with which she has a lifelong friendship. In France, woodcuts are created, she experiments a lot, invents a new glass printing technique that allows more than two prints and can show her works in Paris and Berlin.

In 1940 Rotermund was awarded the Albrecht-Dürer-Prize by the city of Nuremberg for her work and the art prize of the city of Berlin in 1952. She has had exhibitions in Rome, Paris and several times in Berlin. For her 80th birthday, her 16-sheet eraser cycle (1947–1952) De profundis was printed in a special edition. The same initiative also published the volume "Gerda Rotermund" with a catalogue of works in 1985.