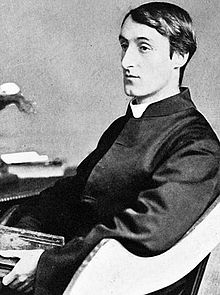 Gerard Manley Hopkins SJ (28 July 1844 – 8 June 1889) was an English poet and Jesuit priest, whose posthumous fame established him among the leading Victorian poets. His manipulation of prosody (particularly his concept of sprung rhythm and use of imagery) established him as an innovative writer of verse. Two of his major themes were nature and religion. The Beginning of the End (1865), The Bugler's First Communion (1879) and Epithalamion (1888) are cited as examples in Sexual Heretics: Male Homosexuality in English Literature from 1850-1900, by Brian Reade.

Some critics have argued that homoerotic readings are either highly tendentious, or, that they can be classified under the broader category of "homosociality," over the gender, sexual-specific "homosexual" term. Hopkins’s journal writings, they argue, offer a clear admiration for feminised beauty. In his book Hopkins Reconstructed (2000), Justus George Lawler critiques Robert Martin’s controversial biography Gerard Manley Hopkins: A Very Private Life (1991) by suggesting that Martin "cannot see the heterosexual beam... for the homosexual biographical mote in his own eye... it amounts to a slanted eisegesis". The poems that elicit homoerotic readings can be read not merely as exercises in sublimation but as powerful renditions of religious conviction, a conviction that caused strain in his family and even led him to burn some of his poems that he felt were unnecessarily self-centred. Julia Saville’s book A Queer Chivalry views the religious imagery in the poems as Hopkins’s way of expressing the tension with homosexual identity and desire.

After suffering ill health for several years and bouts of diarrhoea, Hopkins died of typhoid fever in 1889 and was buried in Glasnevin Cemetery,[16] following his funeral in Saint Francis Xavier Church on Gardiner Street, located in Georgian Dublin. He is thought to have suffered throughout his life from what today might be diagnosed as either bipolar disorder or chronic unipolar depression, and battled a deep sense of melancholic anguish. However, on his death bed, his last words were, "I am so happy, I am so happy. I loved my life."[4]

Christopher Ricks notes that Hopkins engaged in a number of penitential practices, "... but all of these self-inflictions were not self-inflictions to him, and they are his business—or are his understanding of what it was for him to be about his Father’s business."[12] Ricks takes issue with Martin's apparent lack of appreciation of the importance of the role of Hopkins' religious commitment to his writing, and cautions against assigning a priority of influence to any sexual instincts over other factors such as Hopkins' estrangement from his family.[12] Biographer Paul Mariani finds in Hopkins poems "... an irreconcilable tension—on the one hand, the selflessness demanded by Jesuit discipline; on the other, the seeming self-indulgence of poetic creation."[23]