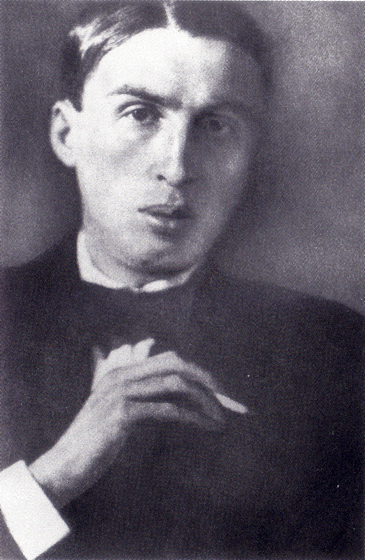 Georgy Vladimirovich Ivanov (10 November [O.S. 29 October] 1894 in Puki Estate, Seda Volost, Kovno Governorate – 26 August 1958 in Hyères, Var, France) was a leading poet and essayist of the Russian emigration between the 1930s and 1950s. He was a member (later one of the two leaders, along with Georgy Adamovich) of the Saint Petersburg Poet's Workshop.

As a banker's son, Ivanov spent his young manhood in the elite circle of Russian golden youth. He started writing verses, imitative of Baudelaire and the French Symbolists, at a precocious age. Although his technique of versification was impeccable, he had no life experience to draw upon. The favourite subjects of his early poetry were Rococo mannerisms and gallant festivals. He named two of his books The Embarkment for Cythera, alluding to Watteau's painting.

After practicing a variety of Russian Futurism, as promoted by Igor Severyanin, Ivanov came to associate himself with the Acmeism movement. Although not considered a major talent, the 20-year-old was addressed or mentioned in poems by Osip Mandelshtam and Anna Akhmatova. He was also considered to be one of the best pupils of the informal "Guild of Poets" school organized by Nikolay Gumilyov and Sergei Gorodetsky.

Ivanov was the only prominent member of this circle who emigrated to the West. His natural arrogance and peremptory judgements easily won him respect and admiration from his younger contemporaries. He promoted himself as the only remnant of the highly sophisticated milieu of the Russian Silver Age. To augment his standing, he issued a book of memoirs, entitled Petersburg Winters, which contained a fictionalized or exaggerated account of his experiences with the Acmeists. The book alienated Ivanov from his elder contemporaries but won instant acclaim from his disciples.

Together with his wife Irina Odoyevtseva and his fellow critic Georgy Adamovich, Ivanov became the principal arbiter of taste of the emigrant society, forging or destroying literary reputations. However, their literary taste was somewhat deficient: they inadvertently dismissed Marina Tsvetayeva's genuine lyrics (when anonymously submitted by her to a poetry contest) as a crude imitation of Tsvetayeva's manner. They enthusiastically feuded with Russian litterateurs in Berlin, with Vladimir Nabokov becoming a favourite target of their attacks. Nabokov revenged himself by satirizing Ivanov in one of his best-known short stories, Spring in Fialta, and by creating a clever mystification which resulted in Adamovich's immoderate praise of Nabokov's verses printed under an alias.

Afflicted with alcoholism and suffering from despondency, Ivanov sank ever lower. It was in conditions of abject penury and total despair that Ivanov's best poems were created. His art culminated in his last cycle of poems, written in the days preceding his death. In one of his last pieces, Ivanov prophetically promised "to return to Russia as poems". His wife returned to Leningrad during Perestroika and died there in 1990.

Following Ivanov's death, his reputation has been steadily augmented. His "poetry of brilliant despair", as one critic put it, is taken by some to presage the tenets of French Existentialism.[1]