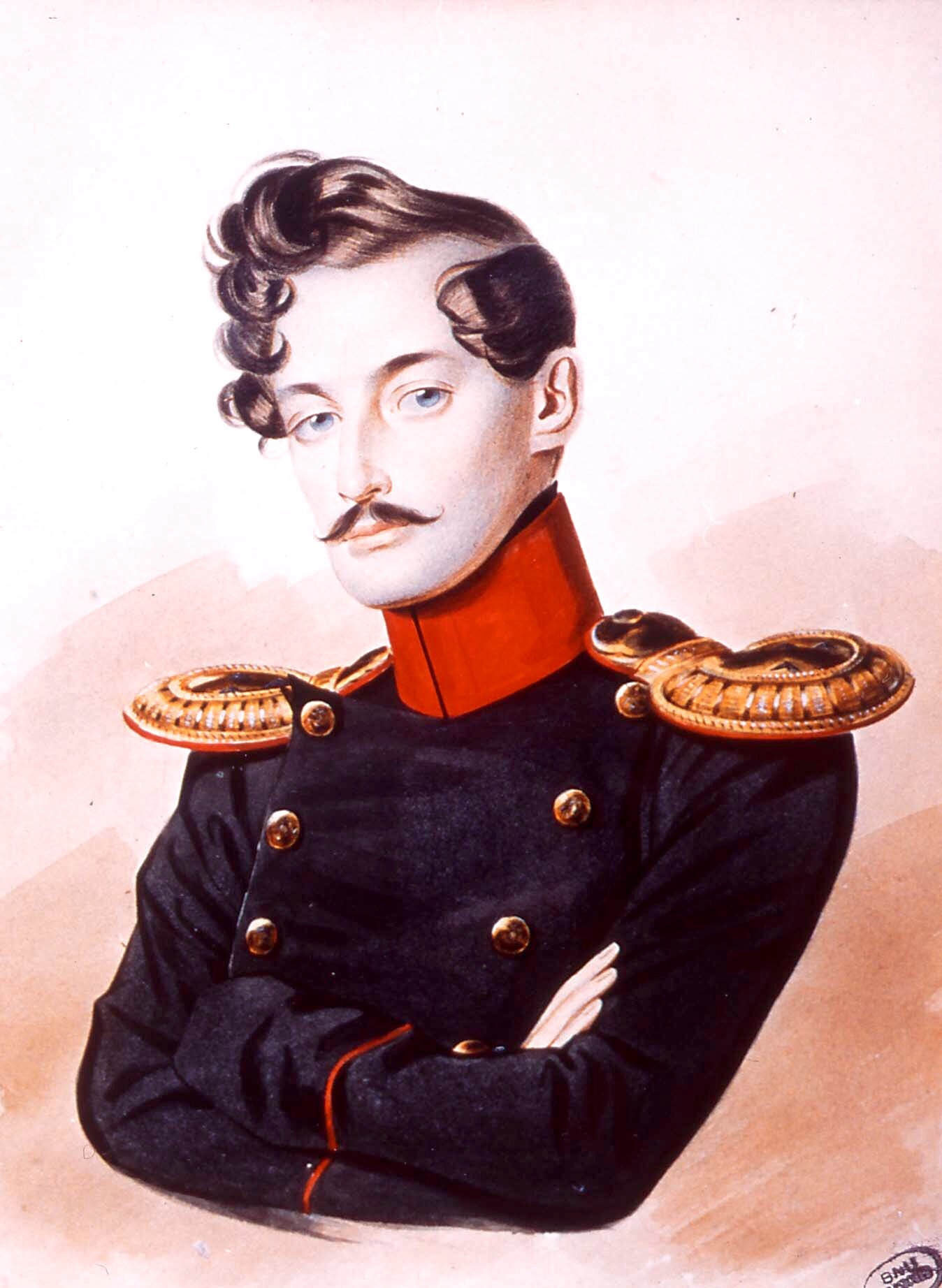 Baron Georges-Charles de Heeckeren d'Anthès (5 February 1812 – 2 November 1895) was a French military officer and politician. Despite his later career as a senator under the Second French Empire, D'Anthès is mostly known for fatally wounding the eminent Russian poet Alexander Pushkin in a duel in 1837.

Born in Colmar to aristocratic Alsatian parents, the first boy among six children, he was destined for a military career. He was therefore sent to Saint-Cyr, the premier French military academy, and, in 1830, as cavalry officer, he supported Charles X's party during the July Revolution. After the exile of Charles X, d'Anthès refused to serve under the July Monarchy, resigned from the army and withdrew to his father's home in Alsace.

As he was authorized by the French government to serve abroad without losing his nationality, he set off first for Prussia, then for Russia. On the way, in Germany he caught cold and took to his bed at an inn of a small German town. His money was nearly up; the illness proved to be lingering. By chance (because of breakage of a carriage) the string of carriages of the Dutch Ambassador Baron Jacob van Heeckeren tot Enghuizen turned to the inn. At dinner the innkeeper told Heeckeren about the illness of the lonely French man; out of curiosity Heeckeren came to Georges's room and was stricken with the young man's beauty. He kept vigil over the sick young man till Georges got better, and then he offered the young man to join his train. As some evidential facts testify, the relationship between d'Anthès and Heeckeren was distinguished by uncommon care of each other and tenderness. There are several mentions of the homosexual love affair of Heeckeren and d'Anthès in the works by some authors who wrote about the life of Pushkin. In the book "The Duel and Death of Pushkin" P. Shchegolev claims: "...The ambassador was intimate to the young French man in a special way, by the perverse intimacy of a man to man". More distinct mention of the friendship of Heeckeren and d'Anthès is found in the booklet by Prince A. Trubetskoy: "...some pranks was usual to him [d'Anthès], however all the pranks were quite inoffensive and usual to the youths but one, of which we learnt much later. I don't know what to say: whether he took Heeckeren or Heeckeren took him... Judging by all, ... in the intercourse with Heeckeren he was a passive partner".

By P. Annenkov's account, "Heeckeren was a homosexual, he was jealous of d'Anthès and he wanted to quarrel d'Anthès with the Pushkins". In Letters A. Karamsin says: "Being a clever man and the most refined debauchee in the world Heeckeren possessed d'Anthès's body as well as soul easily and entirely". Pushkin in his dairies writes: "I was the first in society who has learnt that d'Anthès gives himself to Sodomite sin, and I gave publicity to the news with pleasure. I've learnt of that from the whores in the brothel, which he frequented. The girls said confidentially to me as their old friend, that d'Anthès paid them a lot of money so that they in turn licked his arse that was busted, and it bled like my whores' after they were buggered mercilessly. As Heeckeren adopted him there's no doubt about that".

In St. Petersburg, he succeeded in entering the Knights Guards of the Empress as cornet. Two years later, in 1836, he became lieutenant.

His family ties and good looks gave him access to St. Petersburg high society. Baron Heeckeren after a lengthy correspondence and a journey to Alsace, proposed to d'Anthès's father that he adopt his son as his own heir. After the agreement of the King of the Netherlands, Georges-Charles d'Anthès took the name of Georges-Charles de Heeckeren d'Anthès.

From booklet by Prince A. Trubetskoy: "...d'Anthès was known for his antics, quite inoffensive and appropriate to youths except the one, of which we learnt much later. I don't know what to say: whether he took Heeckeren or Heeckeren took him... All in all, ... in the intercourse with Heeckeren he was ever a passive partner".

D'Anthès met Pushkin and his wife, Natalia, a beautiful and flirtatious young woman who had many admirers. D'Anthès courted her in a compromising way. Soon after he was refused by Natalia Pushkina, a number of Pushkin's closest friends, as well as Pushkin himself, received copies of an anonymous lampoon on Pushkin. The lampoon was a mock letter awarding Pushkin the title of Deputy Grand Master and Historiographer of the Order of Cuckolds. Pushkin accused Heeckeren to be the lampoon's author, though the true author has never been established. Expert research ruled out Heeckeren authorship as the lampoon (written in French) contained errors extremely unlikely for a native speaker, and such authorship would have been too risky for a diplomat. In the complicated affair that ensued, D'Anthès married Natalia's sister, Yekaterina Goncharova, on 10 January 1837. It has been suggested that d'Anthès's engagement and marriage to Natalia's sister was devised to contradict society gossip that he was in pursuit of Natalia. In any event, this was not enough to settle the conflict between the two new brothers-in-law. After marrying Yekaterina, D'Anthès continued to behave provocatively with Natalia, instigating a new duel challenge.

On the evening of 27 January 1837, d'Anthès fired first, mortally wounding Pushkin in the stomach. Pushkin, who had fought several duels, managed to rise and shoot at d'Anthès, but only wounded him lightly in the right arm. As he lay on his deathbed, Pushkin sent a message to d'Anthès pardoning him of any wrongdoing. Pushkin died two days later, after which d'Anthès was imprisoned at Peter and Paul Fortress in St. Petersburg. Dueling was illegal in Russia, and d'Anthès was called to court, but he was pardoned by the Emperor. . Stripped of his rank, he was escorted back to the frontier and ordered to leave Russia permanently. In Berlin, he was joined by his wife, and the couple returned to France, in his father's region. There he began a successful political career: as first president of the local assembly, then member of the National Constituent Assembly from 1848 to 1852, and, at last, irremovable senator from 1852 to 1870.

His wife died on 15 October 1843 while giving birth to their fourth child. After Goncharova's death Heeckeren and d'Anthès conjoined again and never parted. Their male union was long-term and surprisingly constant. Both of them lived till venerable age. D'Anthès died on 2 November 1895 at his family house of Soultz-Haut-Rhina (Sulz/Oberelsaß), then part of the German Empire, and is buried in the family cemetery there.