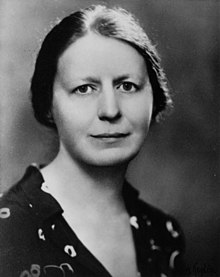 Frieda Segelke Miller was born on April 16, 1889, at La Crosse, Wisconsin, the daughter of James Gordon Miller, a lawyer, and Erna Segelke. Her parents died when Miller was young, and Frieda and her sister Elsie went to live with their grandmother, Augusta Segelke.

Miller attended Milwaukee-Downer College (later Lawrence University), Milwaukee, Wisconsin, B.A. in 1911; she then spent four years doing graduate work in economics, sociology, political science, and law as a fellow of the University of Chicago, but did not complete a degree. In 1940 she was awarded an honorary doctorate of humane letters by Russell Sage College.

In 1917 she served as secretary of the Trade Union College in Philadelphia and taught classes in economics there.

After World War I, Miller and her then partner Pauline Newman were commissioned by the U.S. Departments of State and Labor to investigate postwar factory conditions in Austria, England and Germany.

In 1920 Miller took part at the United States House of Representatives elections to select members in the 67th Congress of the United States. She was part of the Pennsylvania's at-large congressional district but did not win.

In 1929 Frances Perkins appointed Miller as director of the Division of Women in Industry and Minimum Wage at the New York State Department of Labor; Miller was instrumental in the passage of New York's Minimum Wage Law for Women and Minors in 1933. In 1938 Governor Herbert H. Lehman appointed Miller as Industrial Commissioner of New York, the second woman commissioner after Perkins, a post she held until 1943 when she left to become special assistant for labor to John C. Winant, United States Ambassador to the United Kingdom.

As early as 1936 Miller had begun representing the United States at International Labor Organization conferences.

From 1944 to 1953 Frieda S. Miller was the director of the United States Women's Bureau. Her major responsibility was the reintegration of women into the economy after their displacement by veterans returning to their pre-war jobs. She conducted studies to examine labor laws and vocational improvements in the conditions of women in the labor force. In 1948, through the Women's Bureau, she published ''The American Woman'' and in 1951 ''Older Women Workers''. Appointed by Franklin D. Roosevelt, Miller left the Women's Bureau in 1953 at the request of President Dwight Eisenhower.

During the 1950s and 1960s Miller focused on international labor issues. After leaving the Women's Bureau she went to work full-time for the International Labor Organization and conducted several major surveys in Asia and the Middle East of working conditions and opportunities for women and children. From 1957 to 1958 she represented the International Alliance of Women at the United Nations.

In the early 1960s Miller became United Nations representative for the European organization the International Union for Child welfare, conducting an International Child Welfare Survey (#227) and participating in various UNICEF projects. She left the United Nations in 1967 at the age of 78.

Miller was among the founders the Workers' Education Bureau of America and one of the original executive committee members of the Bryn Mawr Summer School.

In 1917 Frieda S. Miller met Pauline Newman, who arrived in Philadelphia to build a new branch of the Women’s Trade Union League.

Miller left her position as teacher to help Newman with her work for the Women's Trade Union. By 1918 they were living together. In 1923 while in Germany with Newman, Miller adopted a daughter, Elisabeth. Miller and Pauline moved to Greenwich Village, at 299 West 12th Street, and they raised Miller's daughter together. The relationship, even if turbulent, lasted until Miller's death in 1974.

Miller and Newman were part of the tight knit circle of women surrounding Eleanor Roosevelt. They visited regularly her at Val-Kill.

Miller had a summer home in Connecticut and later one in Pennsylvania; she spent the last four years of her life in a New York City nursing home, the Mary Manning Walsh Home, where she died on July 21, 1973.

The Papers of Frieda S. Miller, 1909-1973 (inclusive), 1929-1967 (bulk) are hosted at the Arthur and Elizabeth Schlesinger Library on the History of Women in America, Radcliffe Institute for Advanced Study, Harvard University.