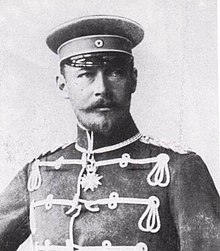 He was born in Schloss Ludwigslust the son of Friedrich Franz II, Grand Duke of Mecklenburg-Schwerin, and his first wife Princess Augusta of Reuss-Köstritz. He succeeded his father as Grand Duke on 15 April 1883.

From an early age Friedrich Franz suffered from asthma and severe breathing difficulties. He could not live in the north of Europe and lived instead on the shores of the Mediterranean, where the mild climate agreed with him. His homosexuality was an open secret.[1]

Friedrich Franz's death in Cannes on 10 April 1897 is shrouded in mystery, as he was originally reported to have committed suicide by throwing himself off a parapet of a bridge.[2] According to the official account of his death, however, he was in his garden when he experienced breathing difficulties and staggered around before falling over a low wall.[3] He was succeeded by his son Friedrich Franz IV, who would be the last Grand Duke of Mecklenburg-Schwerin.