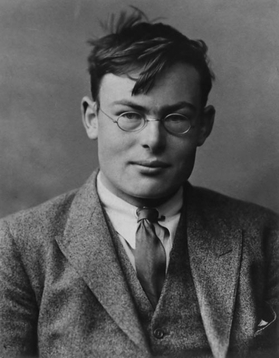 Frank Plumpton Ramsey (22 February 1903 – 19 January 1930) was a British philosopher, mathematician, and economist who made major contributions to all three fields before his death at the age of 26. He was a close friend of Ludwig Wittgenstein and was instrumental in translating Wittgenstein's Tractatus Logico-Philosophicus into English, as well as persuading Wittgenstein to return to philosophy and Cambridge. Like Wittgenstein, he was a member of the Cambridge Apostles, the secret intellectual society, from 1921.

Ramsey was born on 22 February 1903 in Cambridge where his father Arthur Stanley Ramsey (1867–1954), also a mathematician, was President of Magdalene College. His mother was Mary Agnes Stanley (1875–1927). He was the eldest of two brothers and two sisters, and his brother Michael Ramsey, the only one of the four siblings who was to remain Christian, later became Archbishop of Canterbury. He entered Winchester College in 1915 and later returned to Cambridge to study mathematics at Trinity College. There he became a student of John Maynard Keynes, and an active member in the Apostles. In 1923, he received his bachelor's degree in mathematics, passing his examinations with the result of first class with distinction, and was named Senior Wrangler (top of his class).[2] Easy-going, simple and modest, Ramsey had many interests besides his mathematical and scientific studies. Even as a teenager Ramsey exhibited both a profound ability and, as attested by his brother, an extremely diverse range of interests: He was interested in almost everything. He was immensely widely read in English literature; he was enjoying classics though he was on the verge of plunging into being a mathematical specialist; he was very interested in politics, and well-informed; he had got a political concern and a sort of left-wing caring-for-the-underdog kind of outlook about politics. — Michael Ramsey, Quoted in Mellor. In 1923, Ramsey was befriended by Geoffrey and Margaret Pyke, then on the point of founding the Malting House School in Cambridge; the Pykes took Ramsey into their family, taking him on holiday and asking him to be the godfather of their young son. Margaret found herself to be the object of his affection, Ramsey recording in his diary: One afternoon I went out alone with her on Lake Orta and became filled with desire and we came back and lay on two beds side by side she reading, I pretending to, but with an awful conflict in my mind. After about an hour I said (she was wearing her horn spectacles and looking superlatively beautiful in the Burne Jones style) ‘Margaret will you fuck with me?’[3] Margaret wanted time to consider his proposition and thus began an uncomfortable dance between them, which contributed to Ramsey's depressive moods in early 1924; as a result, he travelled to Vienna for psychoanalysis. Like many of his contemporaries, including his Viennese flatmate and fellow Apostle Lionel Penrose (also in analysis with Siegfried Bernfeld), Ramsey was intellectually interested in psychoanalysis. Ramsey's analyst was Theodor Reik, a disciple of Freud. As one of the justifications for undertaking the therapy, he asserted in a letter to his mother that unconscious impulses might affect even a mathematician's work. While in Vienna, he made a trip to Puchberg in order to visit Wittgenstein, was befriended by the Wittgenstein family and visited A.S. Neill's experimental school four hours from Vienna at Sonntagsberg. In the summer of 1924, he continued his analysis by joining Reik at Dobbiaco (in South Tyrol), where a fellow analysand was Lewis Namier. Ramsey returned to England in October 1924; with John Maynard Keynes's support he became a fellow of King's College, Cambridge. He joined a Psychoanalysis Group in Cambridge with fellow members Arthur Tansley, Lionel Penrose, Harold Jeffreys, John Rickman and James Strachey, the qualification for membership of which was a completed psychoanalysis. Ramsey married Lettice Baker in September 1925, the wedding taking place in a Register Office since Ramsey was, as his wife described him, a ‘militant atheist'. The marriage produced two daughters. After Ramsey's death, Lettice Ramsey opened a photography studio in Cambridge with photographer Helen Muspratt.[4] Despite his atheism, Ramsey was "quite tolerant" towards his brother when the latter decided to become a priest in the Church of England.[5] In 1926 he became a university lecturer in mathematics and later a Director of Studies in Mathematics at King's College. The Vienna Circle manifesto (1929) lists three of his publications[6][7][8] in a bibliography of closely related authors.

When I. A. Richards and C. K. Ogden, both Fellows of Magdalene, first met Ramsey, he expressed his interest in learning German. According to Richards, he mastered the language "in almost hardly over a week",[9] although other sources show he had taken one year of German in school.[10] Ramsey was then able, at the age of 19, to make the first draft of the translation of the German text of Ludwig Wittgenstein's Tractatus Logico-Philosophicus. Ramsey was impressed by Wittgenstein's work and after graduating as Senior Wrangler in the Mathematical Tripos of 1923 he made a journey to Austria to visit Wittgenstein, at that time teaching in a primary school in the small community of Puchberg am Schneeberg. For two weeks Ramsey discussed the difficulties he was facing in understanding the Tractatus. Wittgenstein made some corrections to the English translation in Ramsey's copy and some annotations and changes to the German text that subsequently appeared in the second edition in 1933. Ramsey and John Maynard Keynes cooperated to try to bring Wittgenstein back to Cambridge (he had been a student there before World War I). Once Wittgenstein had returned to Cambridge, Ramsey became his nominal supervisor. Wittgenstein submitted the Tractatus Logico-Philosophicus as his doctoral thesis. G.E. Moore and Bertrand Russell acted as examiners. Later, the three of them arranged financial aid for Wittgenstein to help him continue his research work. In 1929 Ramsey and Wittgenstein regularly discussed issues in mathematics and philosophy with Piero Sraffa, an Italian economist who had been brought to Cambridge by Keynes after Sraffa had aroused Benito Mussolini's ire by publishing an article critical of the Fascist regime in the Manchester Guardian. The contributions of Ramsey to these conversations were acknowledged by both Sraffa and Wittgenstein in their later work, the latter mentioning him in the introduction to his Philosophical Investigations as an influence.

Suffering from chronic liver problems, Ramsey developed jaundice after an abdominal operation and died on 19 January 1930 at Guy's Hospital in London at the age of 26. There is a suspicion that the cause of his death might be an undiagnosed leptospirosis with which Ramsey, an avid swimmer, could have become infected while swimming in the Cam.[11] He is buried in the Parish of the Ascension Burial Ground in Cambridge; his parents are buried in the same plot.[12] Ramsey's notes and manuscripts were acquired by Nicholas Rescher for the Archives of Scientific Philosophy at the University of Pittsburgh. This collection contains only a few letters but a great many drafts of papers and book chapters, some still unpublished. Other papers, including his diary and letters and memoirs by his widow Lettice Ramsey and his father, are held in the Modern Archives, King's College, Cambridge.