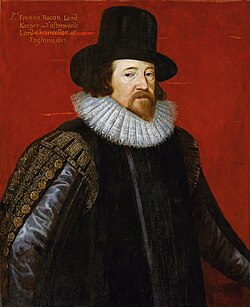 Francis Bacon, 1st Viscount St Alban,[a] PC KC ([5] 22 January 1561 – 9 April 1626) was an English philosopher, statesman, scientist, jurist, orator, and author. He served both as Attorney General and as Lord Chancellor of England. After his death, he remained extremely influential through his works, especially as philosophical advocate and practitioner of the scientific method during the scientific revolution. Sir Francis Bacon, Lord Chancellor of England by 1618, is another queer case at court. A historian in 1653, Arthur Wilson, noted that Bacon’s favours to his ‘young, prodigal, and expensive’ servants ‘opened a gap to infamous reports’. His own mother had her doubts, which she expressed to another of her sons, Anthony. ‘I pity your brother,’ she wrote in 1593, when Bacon was thirty-two, ‘yet he pities not himself but keeps that bloody Percy … as a coach companion and bed companion – a proud profane and costly fellow, whose being about him I truly feel the Lord God does mislike and does the less bless your brother in credit and otherwise in his health.’ Anthony Bacon himself was also suspected of sodomy with his servants but once again the case was never pressed against him.

Bacon has been called the father of empiricism.[6] His works argued for the possibility of scientific knowledge based only upon inductive reasoning and careful observation of events in nature. Most importantly, he argued this could be achieved by use of a sceptical and methodical approach whereby scientists aim to avoid misleading themselves. While his own practical ideas about such a method, the Baconian method, did not have a long-lasting influence, the general idea of the importance and possibility of a sceptical methodology makes Bacon the father of scientific method. This marked a new turn in the rhetorical and theoretical framework for science, the practical details of which are still central in debates about science and methodology today. In addition to his work in the sciences, Bacon was also a venerable patron of libraries and developed a functional system for the cataloging of books by dividing them into three categories- history, poesy, and philosophy- which could further be divided into more specific subjects and subheadings.

Bacon is the first recipient of the Queen's counsel designation and was conferred in 1597 when Queen Elizabeth reserved Bacon as her legal advisor. After the accession of King James I in 1603, Bacon was knighted. He was later created Baron Verulam in 1618[4] and Viscount St. Alban in 1621.[3][b] Because he had no heirs, both titles became extinct upon his death in 1626, at 65 years of age. Bacon died of pneumonia, with one account by John Aubrey stating that he had contracted the condition while studying the effects of freezing on the preservation of meat. He is buried at St Michael's Church, St Albans, Hertfordshire.[7]

Several authors[44][45] believe that despite his marriage Bacon was primarily attracted to the same sex. Forker,[46] for example, has explored the "historically documentable sexual preferences" of King James and Bacon and concluded they were both orientated to "masculine love", a contemporary term that "seems to have been used exclusively to refer to the sexual preference of men for members of their own gender."[47] The well-connected antiquary John Aubrey noted in his Brief Lives concerning Bacon, "He was a Pederast. His Ganimeds and Favourites tooke Bribes".[48] The Jacobean antiquarian, Sir Simonds D'Ewes implied there had been a question of bringing him to trial for buggery,[49] which his brother Anthony Bacon had also been charged with.[50]

This conclusion has been disputed by others,[28][51][52][53][54] who point to lack of consistent evidence, and consider the sources to be more open to interpretation. Publicly, Bacon distanced himself from homosexuality. In his New Atlantis, Bacon describes his utopian island as being "the chastest nation under heaven", in which there was no prostitution or adultery, and further saying that "as for masculine love, they have no touch of it".[55]