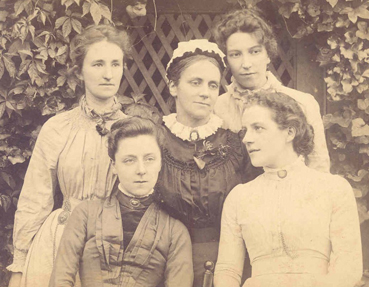 Frances Ralph Gray (July 9, 1861 - November 10, 1935) was educated at Plymouth High School. She went on to study at Newnham College, Cambridge, where she took the Classical Tripos in 1883. Constance Maynard engaged in a series of passionate relationship with other women during her career in teaching and as mistress of Westfield College. Within a year of founding Westfield, Maynard invited Anne Wakefield Richardson, a young Quaker student from Newnham College, to transfer in the hope of sharing some of the responsabilities of Maynard's position. Richardson brought a friend, Frances Ralph Gray (Ralph), with her and the three women formed a close emotional bond. Constance ultimately fell in love with Ralph and the two were very close for two years before Ralph abruptly withdrew, first into a separate apartment outside of Westfield and later travelling away. However, in 1891 Ralph returned to Westfield, apparently hoping to renew their intimacy.

Frances Ralph Gray was born in Tipperary, Ireland on 9 July 1861 to James Gray and Sarah Meredith.

In October 1883, she became Resident Lecturer at Westfield College, becoming the second member of staff to join the College.

Gray was in charge of the College library, and sometimes disagreed with Constance Maynard on the books that it should contain. Maynard believed the collection should contain not 'what girls may read, and many had better not, but rather all they ought to read'. Gray believed there should be books that 'really educate', and which were more current and being debated, like George Eliot's Adam Bede.

Gray was instrumental in founding the Westfield College Association, which was established in 1900, and of which she was president from 1928-1931. She was also a member of the College Council from 1897-1929.

In 1894, Gray left her Lecturer post at Westfield to become Headmistress of St Katharine's School in St Andrews. And 1903, she moved on to become First Head Mistress of St Paul's School, where she remained until 1927.

She was committed to women's education throughout her career, and was president of the Association of Headmistresses from 1923-1925.