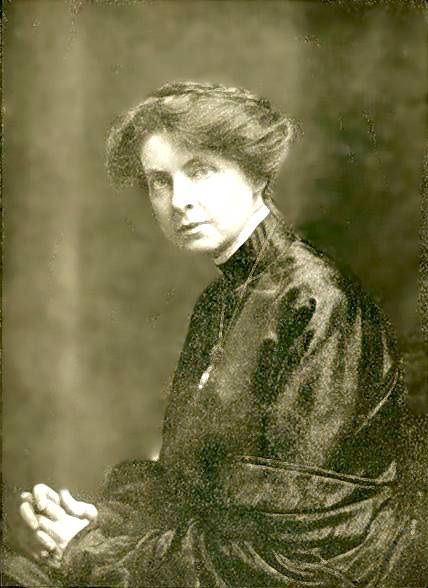 Florence Kate Upton (22 February 1873 – 16 October 1922) was an American-born English cartoonist and author most famous for creating the Golliwogg character, featured in a series of children's books.

Upton was born in Flushing, New York, to British parents who had immigrated recently. She was the second of four children in a creative and slightly eccentric household. Florence's father, Thomas Harborough Upton, worked as a confidential clerk at the American Exchange Bank in New York. In 1884 the family moved from Flushing to central Manhattan, which was more convenient for her father's daily journey to his office. The National Academy of Design, located near the new home, offered free instruction to anyone who could qualify. This prompted her father to enroll in evening classes and Florence, at 15 years old, joined him for the beginning of her formal art training.

In June 1889 the family was placed in financial difficulty by the sudden death of Thomas Upton. Florence's mother, Bertha, had a trained singing voice and began to give voice lessons in the home. Her older sister Ethelwyn found work, while her younger siblings Alice and Desmond remained in school. Florence, at age 16, obtained work as a professional illustrator. Numerous publications existed at this time, mainly as vehicles for advertising and light fiction of varying merit. Some of the same authors whose stories appeared in the magazines went on to employ Florence to illustrate their novels or books of short stories. Finances eventually stabilised to such a degree that in 1893 the family was able to pay an extended visit to Bertha's relatives, the Hudsons, who lived in the Hampstead area of London. With an established reputation from her published work in New York, Florence had no difficulty in finding employment with London publishers. When the rest of the family returned to the United States she opted to stay in England and began experimenting with ideas to supplement her income so that she could afford further art training.

Upton began to sketch out ideas for a children's book, using "penny wooden" dolls as her models. However, without a central character on which to hang the tale, progress came to a standstill. Her aunt, Kate Hudson, found an old toy in her attic that had belonged to the Upton children, left behind from an earlier visit. This toy, which she named Golliwogg, provided inspiration, and the first story was completed in 1894. The publishing house of Longmans, Green & Co. offered her a contract and The Adventures of Two Dutch Dolls and a Golliwogg was published for Christmas 1895. During her stay in London, Upton provided illustrations for The Strand Magazine, The Idler and Punch. The American Society in London also commissioned a series of drawings and cartoons to decorate the souvenir programme of their November 1896 Thanksgiving Banquet. After three years of work, she returned to New York to attend the Art Students League, then continued studies in Paris and Holland. Returning to London in 1906 to take up permanent residence, she moved to 21 Great College Street in 1910. Through the years Florence and Bertha collaborated on thirteen Golliwogg adventures, beginning with The Adventures of two Dutch Dolls and a “Golliwogg”. For example, the cover of the first “Golliwogg” book stated 'words by Bertha Upton'.[1] Over the years, cultural drift caused interest in the series to wane, and Florence sought a career as a professional artist. The last of the books was published in 1909. Upton continued to study and paint, concentrating mainly on portraits. She exhibited at the Royal Academy and other prominent venues and rapidly established a reputation as an accomplished society portraitist. Additionally, she received hundreds of commissions from the families of young soldiers. For health reasons Florence was found unfit to serve in any physical capacity during the First World War. Instead she aided the war effort by donating her original dolls and drawings to a fund-raising auction for the Red Cross, conducted by Christie's in 1917. The dolls, sold as a lot for 450 guineas, funded the purchase of an ambulance, christened 'Golliwogg', which went to the front and served in France.[1]

At the age of 49, Florence Upton died in her studio on 16 October 1922, from complications following surgery. She is buried in Hampstead Cemetery. Her aunt, Kate Hudson, was the sole executrix of her will.