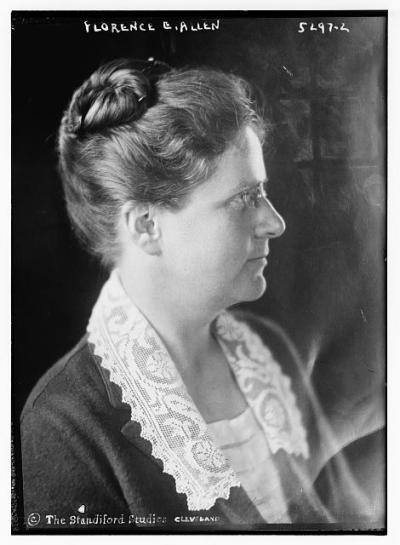 She was a United States Circuit Judge of the United States Court of Appeals for the Sixth Circuit. She was the first woman to serve on a state supreme court and one of the first two women to serve as a United States federal judge. During court recess, she shared a Cleveland home with two close friends and career women, Susan Rebhan (1885-1935) and Mary E. Pierce (1891-1978), and an assortment of cocker spaniels; which she adored. A good handful of nieces and nephews lived nearby. She owned a sixteen-acre retreat in Lake County with a shack, which in the early 1940s, she and Mary—having lost Susan to influenza in 1935—eventually refurbished into a year-round home. There, Florence returned to the outdoor activities of her youth, gathering, sawing, and splitting wood, and revived her piano skills.

Florence Ellinwood Allen was born on March 23, 1884, in Salt Lake City, Utah. Allen was an avid scholar even at an early age. By the time she was seven, Florence’s father taught her Latin and Greek. Allen attended New Lyme Institute in Ashtabula, Ohio. She graduated from Western Reserve University in 1904 and studied music (piano) for two years in Germany. A nerve injury caused an end to her music career. She returned to Cleveland and earned her living as a music critic from 1906 to 1909.

Allen received a Masters of Arts in political science and constitutional law from Western Reserve in 1908. Inspired by one of her professors to consider a law career, she applied to Western Reserve and was rejected because she was female. Instead, she attended the University of Chicago (1909-10) and New York University (1911-13). During this time, she was actively campaigning for women’s suffrage.

Allen was admitted to the Ohio Bar in 1914. No one would hire Allen, so she started her own law firm. She also worked as an unpaid volunteer for the Cleveland Legal Aid Society. In 1919, she was appointed as assistant prosecutor of Cuyahoga County. A year later she was elected judge of the court of common pleas. In 1922, she was elected to the Ohio Supreme Court and reelected in 1928. Allen was the first woman to appear in all of these courts.

Molly Dewson was responsible for many high-level appointments of women: Nellie Tayloe Ross as director of the mint, Florence Allen as a judge on the circuit court of appeals (the highest position a woman had ever attained in the federal judiciary), Marion Glass Banister as assistant treasurer of the United States, Ruth Bryan Owen as minister to Denmark (the first woman to represent the United States abroad). Because of Dewson, women were afforded gre respect in the Democratic Party through two elections.

Allen was nominated by President Franklin D. Roosevelt on March 6, 1934, to a seat on the United States Court of Appeals for the Sixth Circuit vacated by Judge Smith Hickenlooper.[15] She was confirmed by the United States Senate on March 15, 1934, and received her commission on March 21, 1934.[15] She was the second woman to serve in the federal judiciary and the first woman to serve as an Article III federal judge.[1] Genevieve R. Cline was earlier appointed to serve as an Article I federal judge on the United States Customs Court.[16] Her nomination to the prestigious position received widespread praise. Newspaper articles described Allen as "an able jurist" and a "profound student" of the law.[8] Allen served as Chief Judge from 1958 to 1959.[15] She was a member of the Judicial Conference of the United States in 1958.[15] She assumed senior status on October 5, 1959.[15] Her service terminated on September 12, 1966, due to her death.[15]

Allen continued her ongoing advocacy of women's rights. She was a member of the National Association of Business and Professional Women, and spoke at several of their conventions,[17]] and was a member of the National Association of Women Lawyers.[10] Allen continued to advocate an end to wars. In 1935, she was one of ten "outstanding American women", with Eleanor Roosevelt and feminist leader Carrie Chapman Catt, to contribute to Why Wars Must Ceasee. In her essay, Allen asserted that wars "unleash demoralizing instincts" such as "callousness, cynicism, and greed." She said they also contribute to numerous social problems, including the break-up of families, and increases in crime.[18]

Florence Allen and her friends entertaining themselves in front of Allen's cottage in Moraine Park. Susan Rebhan is standing with her arm around Florence Allen who is helping to support Mary E. Pierce. Bertha "Bert" Miller is below Mary's foot.

After her retirement, she continued to do speaking engagements and began working on her autobiography. It was called To Do Justly, and was published in the autumn of 1965.[1] From the time of her growing up in Utah, Allen was an avid hiker. She visited Estes Park and soon purchased land in Moraine Park to build a cabin. She and her companion Mary Pierce visited the cabin almost every summer from 1927 to 1953.

In declining health after falling and breaking her hip, Allen died on September 12, 1966 in Waite Hill, Ohio, where she had been living with Mary Pierce since her retirement. Mary E. Pierce, nicknamed "her cousin" by Allen, lived and worked with Allen from the 1930s till Allen's death in 1966. In Tuve’s biography of Allen, First Lady of the Law, Mary Pierce is described as an “expert fisherman, hauling in trout by the sixes and eights.” Typically the trout would be cooked and prepared with pancakes, a specialty of the house, and served to cottage guests.

Susan Rebhan entered Ohio State University Law School when Allen moved to Columbus and lived with the Allens. She served as Judge Allen's secretary. Later she was a busy and successful practing laywer. She was in partnership with another woman lawyer, Dorothy Hyde, and they had an office in downtown Cleveland. Susan maintained an apartment in the city and ran for the city council in the declining years of the city manager system. She won easily, but after one term resigned.

In 2005, she was inducted into the National Women's Hall of Fame.