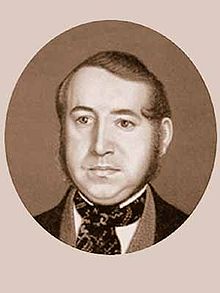 Filipp Filippovich Vigel (November 23, 1786 - March 20, 1856) was a Russian noble of Swedish extraction who served in the foreign ministry, accompanied Count Golovkin on his mission to China, presided over the department of foreign religions and governed the town of Kerch.

He was born in the village of Uspenskoye (Simbukhino, Simbukhovo), Penza Province (today the village of Kalinino, Penza district, Penza Region) into the family of the General, Penza Governor F. L.

Filipp Vigel spent his childhood in Kiev, then lived in Moscow and in the estate of Princes Golitsyns, where he studied Russian literature for some time taught by I. A. Krylov. Having completed his education, Vigel served in the Archives of the Board of Foreign Affairs, numerous departments of the Ministry of Finance, Foreign and Interior Ministries.

In 1824-1826 F. Vigel was the Vice-Governor of Bessarabia, then the Governor of Kerch for two years. Having returned to Petersburg in 1829, he became Director of the Theological Affairs of Foreign Confessions Department. Vigel resigned in 1840 in the rank of the privy councilor which was equal to the rank of lieutenant general.

Vigel witnessed every major event of Alexander I's reign and conversed with a great number of Russian cultural luminaries, including his colleagues at the Arzamas Society such as Alexander Pushkin, who gently mocked Vigel's homosexual proclivities in a verse epistle.

Vigel is remembered primarily for his copious memoirs covering the history of Russia from the reign of Emperor Paul to the November Uprising (1831). They were published by Mikhail Katkov in 1864; the expanded edition (1892) appeared in seven books. After the re-edition in 1928 they were named the “Notes”. The “Notes” also reveal the friendship of the memoirist with M. N. Zagoskin which began in their youth in Penza.

Vigel's reminiscences are engaging, pithy and readily quotable. They are considered unreliable in so far as they concern the Western-leaning literati such as Nikolai Gogol and Pyotr Chaadayev. Vigel hated them passionately. It was Vigel who denounced Chaadayev to the authorities.