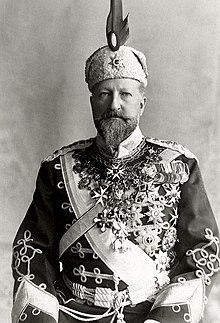 Ferdinand entered a marriage of convenience[13] with Princess Marie Louise of Bourbon-Parma, daughter of Robert I, Duke of Parma and Princess Maria Pia of Bourbon-Two Sicilies, on 20 April 1893 at the Villa Pianore in Lucca. The marriage produced four children:

Marie Louise died on 31 January 1899 after giving birth to her youngest daughter. Ferdinand did not think again about marriage until his mother, Princess Clémentine died in 1907. To satisfy dynastic obligations and to provide his children with a mother figure, Ferdinand married Eleonore Reuss of Köstritz, on 28 February 1908.[14] Neither romantic love or physical attraction played any role, and Ferdinand treated her as no more than a member of the household, and showed scant regard.[15]

In his private relations, Ferdinand was a somewhat hedonistic individual. Bisexual throughout his life, up until early middle age his inclination was more towards women.[16] He enjoyed affairs with a number of women of humble position, siring a number of illegitimate children whom he then supported financially.[15]

In his later life, rumours abounded of Ferdinand's trysts with lieutenants and valets. His regular holidays on Capri, then a popular holiday destination with wealthy gay men, were common knowledge in royal courts throughout Europe.[16] In 1895 an interview given by the embittered former Prime Minister, Stefan Stambolov to the Frankfurter Zeitung created a nine-day scandal across Europe, when he focused strongly on his personal witness of Ferdinand’s homosexual interests.[17]

After his abdication, Ferdinand returned to live in Coburg, Germany. He had managed to salvage much of his fortune and was able to live in some style.[18] He saw his being in exile simply as one of the hazards of kingship.[18] He commented, "Kings in exile are more philosophic under reverses than ordinary individuals; but our philosophy is primarily the result of tradition and breeding, and do not forget that pride is an important item in the making of a monarch. We are disciplined from the day of our birth and taught the avoidance of all outward signs of emotion. The skeleton sits forever with us at the feast. It may mean murder, it may mean abdication, but it serves always to remind us of the unexpected. Therefore we are prepared and nothing comes in the nature of a catastrophe. The main thing in life is to support any condition of bodily or spiritual exile with dignity. If one sups with sorrow, one need not invite the world to see you eat."[19] He was pleased that the throne could pass to his son. Ferdinand was not displeased with exile and spent much of his time devoted to artistic endeavors, gardening, travel and natural history.

However, he would live to see the collapse of everything he had held to be precious in life.[19] His eldest son and successor, Boris III, died under mysterious circumstances after returning from a visit to Hitler in Germany in 1943. Boris III's son, Simeon II, succeeded him only to be deposed in 1946, ending the Bulgarian monarchy. The Kingdom of Bulgaria was succeeded by the People's Republic of Bulgaria, under which Ferdinand's other son, Kyril, was executed. On hearing of Kyril's death he said, "Everything is collapsing around me."[20]

Ferdinand died a broken man in Bürglass-Schlösschen on 10 September 1948 in Coburg, Germany, cradle of the Saxe-Coburg-Gotha dynasty. He was the last surviving grandchild of Louis-Philippe of France. His final wish was to be buried in Bulgaria, and for this reason his coffin was temporarily placed in the crypt of St. Augustin, Coburg, next to his parents' coffins.