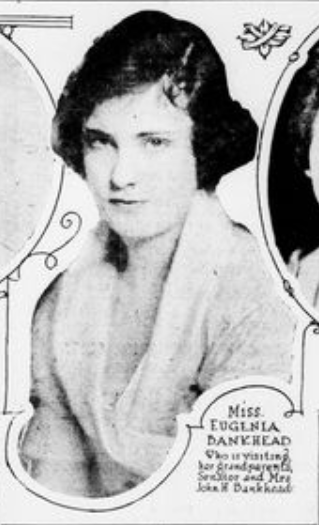 Evelyn Eugenia "Beadsie" Bankhead (January 24, 1901 - March 11, 1979), a world traveler, lived for a time in Paris, where she spent much of her time with F. Scott Fitzgerald and Zelda Fitzgerald, and later in Tangiers. Newspaper stories reported that Louisa D’Andelot Carpenter and her string of lovers, one of them Tallulah Bankhead’s sister, Evelyn Eugenia Bankhead, gathered at Carpenter's Rehoboth Beach house for years.

Evelyn Eugenia Bankhead (1901 - 1979) was born in Huntsville, Madison, Alabama, on Jan 24, 1901 to William Brockman Bankhead and Adelaide Eugenia "Ada" Sledge; her great-great-grandfather, James Bankhead (1738–1799) was born in Ulster, Ireland and settled in South Carolina.[9] "Tallu" was named after her paternal grandmother, who in turn was named after Tallulah Falls, Georgia.[10] Her father hailed from the Bankhead-and-Brockman political family, active in the Democratic Party of the South in general and of Alabama in particular. Her father was the Speaker of the United States House of Representatives from 1936 to 1940. She was the niece of Senator John H. Bankhead II and granddaughter of Senator John H. Bankhead.[11] Her mother, Adelaide "Ada" Eugenia, was a native of Como, Mississippi, and was engaged to another man when she met William Bankhead on a trip to Huntsville to buy her wedding dress. The two fell in love at first sight and were married on January 31, 1900, in Memphis, Tennessee. She was born two months prematurely and had some vision difficulties. Her mother died of blood poisoning (sepsis) on February 23, 1902.

William B. Bankhead was devastated by his wife's death, which sent him into a bout of depression and alcoholism. Consequently, Tallulah and her sister Eugenia were mostly reared by their paternal grandmother, Tallulah James Brockman Bankhead, at the family estate called "Sunset" in Jasper, Alabama.[11]

Tallulah and Eugenia's grandmother and aunt were beginning to find the girls difficult to handle. Their father William, who was working from their Huntsville home as a lawyer, proposed enrolling the girls in a convent school (although he was a Methodist and her mother an Episcopalian). In 1912, both girls were enrolled in the Convent of the Sacred Heart in Manhattanville, New York when Eugenia was 11 and Tallulah was 10. As William's political career brought him to Washington, the girls were enrolled in a series of different schools, each one a step closer to Washington, DC. The girls were not really tamed by the schools, however, as both Eugenia and Tallulah went on to have a lot of relationships and affairs during their lives. Eugenia was more of an old romantic as she got married at 16 and ended up marrying seven times to six different men during her life, while Tallulah was a stronger and even more rebellious personality, who sought a career in acting, was into lust in her relationships even more than love, and showed no particular interest in marrying, although she did marry actor John Emery in 1937, a marriage which ended in divorce in 1941. Bankhead was also childhood friends with American socialite, later novelist, Zelda Sayre Fitzgerald, the wife of American author and expatriate F. Scott Fitzgerald.

She married Morton McMichael Hoyt (three times); Wilfred Lawson Butt (1905 - 1979); Howard B. Lee; Edward Ennis White and William D. Sprouse. Eugenia Bankhead, who had retaken her maiden name after a divorce, died at Kent and Queens Annes Hospital in Chestertown on March 11, 1979, following surgery. She was 78 years old. She was survived by a son and three grandchildren.