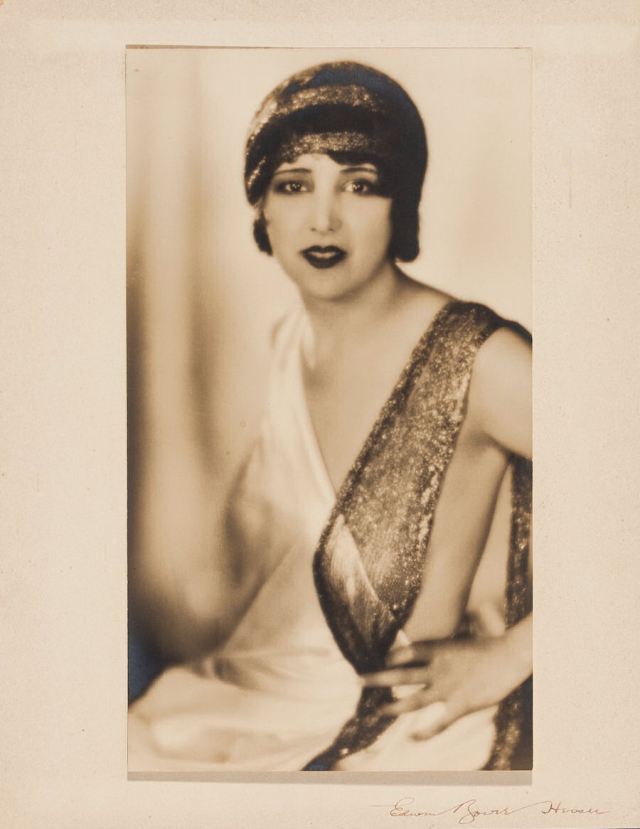 Ida Estelle Taylor (May 20, 1894[note 1] – April 15, 1958) was an American actress, singer, model, and animal rights activist.[5] With "dark-brown, almost black hair and brown eyes," she was regarded as one of the most beautiful silent film stars of the 1920s.[6] She has been romantically linked to Lilyan Tashman.

After her stage debut in 1919, Taylor began appearing in small roles in World and Vitagraph films. She achieved her first notable success with While New York Sleeps (1920), in which she played three different roles, including a "vamp." She was a contract player of Fox Film Corporation and, later, Paramount Pictures, but for the most part of her career she freelanced. She became famous and was commended by critics for her portrayals of historical women in important films: Miriam in The Ten Commandments (1923), Mary, Queen of Scots in Dorothy Vernon of Haddon Hall (1924), and Lucrezia Borgia in Don Juan (1926).

Although she made a successful transition to sound films, she retired from film acting in 1932 and decided to focus entirely on her singing career. She was also active in animal welfare before her death from cancer in 1958. She was posthumously honored in 1960 with a star on the Hollywood Walk of Fame in the motion pictures category.

Taylor married three times, but never had children. In 1911 at aged 17,[22] she married a bank cashier named Kenneth Malcolm Peacock, the son of a prominent Wilmington businessman.[21] They lived together for five years[22] and then separated so she could pursue her acting career in New York.[21] Taylor later claimed the marriage was annulled.[34] In August 1924, the press mentioned Taylor's engagement to boxer and world heavyweight champion Jack Dempsey.[35] In September, Peacock announced he would sue Taylor for divorce on the ground of desertion.[22] He denied he would name Dempsey as co-respondent, saying "If she wants to marry Dempsey, it is all right with me."[22] Taylor was granted a divorce from Peacock on January 9, 1925.[36][37] Taylor and Dempsey were married on February 7, 1925 at First Presbyterian Church in San Diego, California.[38] They lived in Los Feliz, Los Angeles. Her marriage to Dempsey ended in divorce in 1931.

Her third husband was theatrical producer Paul Small. Of her last husband and their marriage, she said: "We have been friends and Paul has managed my stage career for five years, so it seemed logical that marriage should work out for us, but I'm afraid I'll have to say that the reason it has not worked out is incompatibility."[39]

In her later years, Taylor devoted her free time to her pets and was known for her work as an animal rights activist. "Whenever the subject of compulsory rabies inoculation or vivisection came up," wrote the United Press, "Miss Taylor was always in the fore to lead the battle against the measure."[40] She was the president and founder of the California Pet Owners' Protective League,[5][6] an organization that focused on finding homes for pets to prevent them from going to local animal shelters.[41] In 1953, Taylor was appointed to the Los Angeles City Animal Regulation Commission,[6] which she served as vice president.[5]

Taylor died of cancer at her home in Los Angeles on April 15, 1958,[6][23] at the age of 63. The Los Angeles City Council adjourned that same day "out of respect to her memory."[5] Ex-husband Jack Dempsey said, "I'm very sorry to hear of her death. I didn't know she was that ill. We hadn't seen each other for about 10 years. She was a wonderful person."[23] Her funeral was held on April 17 in Pierce Bros. Hollywood Chapel.[5] She was interred at Hollywood Forever Cemetery, then known as Hollywood Memorial Park Cemetery.[5]

She was survived by her mother, Ida "Bertha" Barrett Boylan; her sister, Helen Taylor Clark; and a niece, Frances Iblings.[42] She left an estate of more than $10,000, most of it to her family and $200 for the care and maintenance of her three dogs, which she left to friend Ella Mae Abrams.[42]