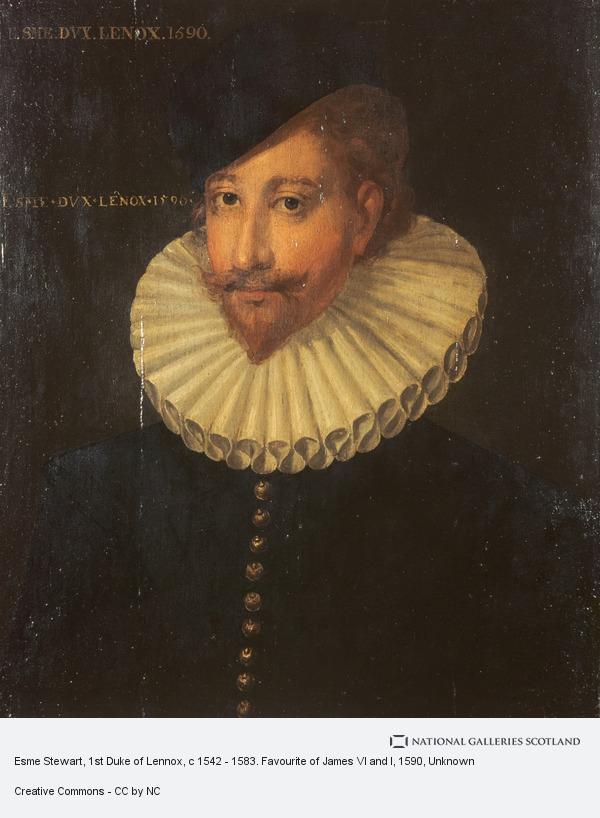 Esmé Stewart, 1st Duke of Lennox, 1st Earl of Lennox (1542 – 26 May 1583) was the son of John Stewart, 5th Lord of Aubigny, who was the younger brother of Matthew Stewart, 4th Earl of Lennox, and his wife Anne de la Queuille. Sir James Melville described him as "of nature, upright, just, and gentle". When Esmé died in France, he directed that his heart be embalmed and sent to the King of Scots.

His mother was French, and he spent much of his life in France, where his father had inherited the Aubigny title and estates. He succeeded his father as 6th Lord of Aubigny in 1567.

At the age of 37, he was introduced to the 13-year-old James VI of Scotland (who was his second cousin), at the time when the latter made his formal entry into Edinburgh and began his personal rule. Having newly arrived from France, Stewart was an exotic visitor who fascinated the young James.[1] Esmé was immediately popular with the king and began to gather rewards and preferments. Stewart went on to join the Privy Council. He was created Earl of Lennox, on 5 March 1580, and then Duke of Lennox on 5 August 1581. During his rise, it was noted that Lennox was also careful to maintain his popularity with the Burgh administrators of Scotland's towns. In July 1580, the English diplomat Robert Bowes reported that Lennox had obtained fishing rights in Aberdeen, which the deposed Regent Morton had formerly given to his servant George Affleck of Balmanno, and then he arranged for the King to give this valuable source of income to the town.[2]

In Presbyterian Scotland, the thought of a Catholic duke irked many, and Lennox had to make a choice between his Catholic faith or his loyalty to James. At the end, Lennox chose James and the king taught him the doctrines of Calvinism. The Scottish Kirk remained suspicious of Lennox after his public conversion, and took alarm when he had the Earl of Morton tried and beheaded on charges of treason.

In response, the Scottish nobles plotted to oust Lennox. They did so by luring James to Ruthven Castle as a guest but then kept him as prisoner for ten months. The Lord Enterprisers forced James to banish Lennox. A lengthy denunciation of Lennox was issued from Stirling Castle on 17 September 1582, citing his religion, association with the murderers of Lord Darnley and Regent Moray and Regent Lennox, and his control over the royal household and international intrigue.[3] Lennox stayed for a while at Dumbarton Castle. In December travelling from Berwick on Tweed, on his way south, by accident the Duke encountered the French ambassador, M. de la Mothe Fénélon, near Northallerton, who was travelling north to treat with the Gowrie Regime. In London the Scottish poet William Fowler pumped him for information which he sent to Francis Walsingham.[4]

The duke journeyed back to France and kept a secret correspondence with James. With his return to France, Lennox had met a frosty reception as an apostate. The Scottish nobles believed that they would be proven right in their convictions that Lennox's conversion was artificial when he returned to France. Instead, the former duke remained aPresbyterian and died shortly after. His final letter to James Stewart, Lord Doune, requests that Lord Doune take care of his son and to recover for him Esmé's possessions in Scotland.[5] After his death in May 1583, William Schaw took his heart back to James in Scotland, and his wife and son Ludovic came to Scotland. James had repeatedly vouched for Lennox's religious sincerity and memorialized him in a poem called "Ane Tragedie of the Phoenix", which compared him to an exotic bird of unique beauty killed by envy.

James regarded all Lennox's family with great affection, and instructed his son Charles I to do well by them. Charles faithfully fulfilled this obligation, and as a result the Lennox family had considerable influence at the English Court over the next two generations.

Catherine outlived her husband by many years, and died sometime after 1630. She spent her later years at the family estate at Aubigny, and was entrusted with the upbringing of her grandchildren.