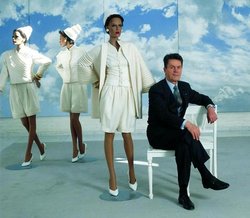 He moved to Copenhagen when he was 16 years old, where he became an apprentice to the fashion designer Holger Blom.

When Pierre Balmain died in 1982, Erik Mortensen took on the role of head designer and carried on Balmain’s legacy while also creating his own style.

He designed a total of 17 collections as the head designer at Balmain.

Erik Mortensen left Pierre Balmain in 1990 and was hired as the head designer for Jean-Louis Scherrer in 1992. He designed four collections for the house from 1992-95.