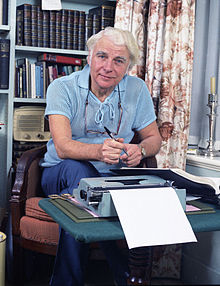 George Emlyn Williams, CBE (26 November 1905 – 25 September 1987), known as Emlyn Williams, was a Welsh writer, dramatist and actor. Before WWII he was in a relationship with actor W. "Bill" Cronin Wilson.

Williams was born into a Welsh-speaking, working class family at 1 Jones Terrace, Penyffordd, Ffynnongroyw, Flintshire. He spoke only Welsh until the age of eight and was barely literate. Later said he would probably have begun working in the mines at age 12 if he had not caught the attention of a London social worker named Sarah Grace Cooke, the model for Miss Moffat in The Corn is Green. She established a school in Holywell Grammar School in 1915, and, recognising Williams's aptitude for languages, granted him a scholarship. Over the next seven years she worked with him on his English and helped him prepare to be a teacher. She obtained a scholarship for him to visit Switzerland, to study French, and when he was 17 she helped him win a scholarship to Christ Church, Oxford, where he read French and Italian.[1]

In 1926, during his studies at Oxford, Williams had a nervous breakdown, which was blamed largely on a failed emotional friendship with another undergraduate, but Miss Cooke encouraged him to write as a way to recover.[2] But Williams intended to enter the theatrical world on the front line too, and joined the Oxford University Dramatic Society (OUDS).[3]

He performed with the OUDS in his first full-length play, Full Moon, at the original Oxford Playhouse in 1927, and later that year he joined a London-based repertory company and began his stage career. By 1930, he had expanded his writing with works such as A Murder Has Been Arranged and The Late Christopher Bean.

After moving to London in the late 1920s Emlyn enjoyed a series of relationships with men, including a deeply intimate affair with the actor Bill Cronin-Wilson. Disturbingly, however, he remained attracted to women. “I was standing stock still in the middle of the road, and that’s as good a way of getting run over as any.” This conflict came to a head after Bill’s death in 1934. After a long holiday, Emlyn returned to London. There he fell in love with Molly and proposed to her: I faced the final hurdle, the high one I had been skirting, my attitude towards my own sex . . . though I had never been a slave to pursuit, however undemanding my sudden sallies I had always been free to indulge in them. The idea that I should be cut off from that freedom was alarming. Emlyn’s “alarm” at meeting the standards of fidelity and commitment marriage demanded was compounded by his developing relationship with Fess, a young workingman. At one point Emlyn, Fess, and Molly were holidaying in the same house. I looked at the door. If it opened which of the two would I hope to see? . . . I was waiting for him now in a torment I had not expected and if he entered now I would feel tormented relief. If she appeared I would be delighted by the sight of the person I loved. The protracted conflict between differing desires and loves, his attraction to men and his feelings for women, threatened to tear Emlyn apart. His anguished cry, “Is everyone two people constantly?” suggested his emotional “torment.” It was only after Emlyn discovered that Fess had stolen from him and was sleeping with women—thereby falling short of his own expectations—that this conflict was resolved. He rejected Fess and married Molly.

Over the next few years, Williams took on roles on stage and on film, including the first celluloid version of the Edgar Wallace mystery, The Frightened Lady. He became an overnight star, however, with his thriller Night Must Fall (1935), in which he also played the lead role of a psychopathic murderer. The play was noted for its exploration of the killer's complex psychological state, a step forward for its genre. It was made into a film in 1937 with Robert Montgomery, and again in 1964 with Albert Finney. It has been frequently revived, most recently in the West End with Jason Donovan,[4] and on Broadway in 1999 with Matthew Broderick.[5][6]

His other great play was very different: The Corn Is Green (1938), partly based on his own childhood in Wales. He starred as a Welsh schoolboy in the play's London premiere. The play came to Broadway in 1940 with Ethel Barrymore as the schoolteacher Miss Moffat. A 1950 Broadway revival starred Eva La Gallienne. The play was turned into a film starring Bette Davis, and again into a made-for-television film starring Katharine Hepburn, under the direction of Williams's close friend George Cukor. An attempt to turn the play into a musical in the 1970s, with Davis again in the role of the schoolteacher with lyrics by Williams, failed. So did a Broadway revival in 1983 starring Cicely Tyson and Peter Gallagher. But a 1985 London revival at the Old Vic with Deborah Kerr was successful, as was a 2007 production at the Williamstown Theatre Festival in Massachusetts. That production starred Kate Burton. Williams was a close friend of Kate's parents, Richard Burton and Burton's first wife, Sybil. In the Williamstown production, the schoolboy — the role created by and modeled on Williams himself — was played by Kate Burton's son, Morgan Ritchie.[7]

His autobiographical light comedy, The Druid's Rest was first performed at the St Martin's Theatre, London, in 1944. It saw the stage debut of Richard Burton whom Williams had spotted at an audition in Cardiff. The play has been revived at Clwyd Theatr Cymru in both 1976 and 2005, and received its first London revival in sixty years at London's Finborough Theatre in 2009.[8][9]

Williams was married in 1935 to actress Mary Marjorie O'Shann (Molly Shan), who died in 1970. They had two sons, Alan, a writer, and Brook, an actor. Brook Williams became a close friend of Richard Burton's, working as Burton's personal assistant and appearing in many of Burton's films.

But both during his marriage and following his wife's death, Williams was actively bisexual throughout his adult life. He maintained a relationship from 1981 to 1986 with American theatre journalist Albert N. Williams (no relation), whom Emlyn Williams met while appearing at the Northlight Theatre in the Chicago area with his one-man Charles Dickens show. (Albert Williams served as Emlyn Williams' personal assistant during a 1982 tour of England, Wales and Ireland with the Charles Dickens and Dylan Thomas solo shows.)

Emlyn Williams died at his flat in Dovehouse Street, Chelsea, London — aged 81, from complications from cancer on 25 September 1987. He was cremated at Golders Green Crematorium, London.[12]