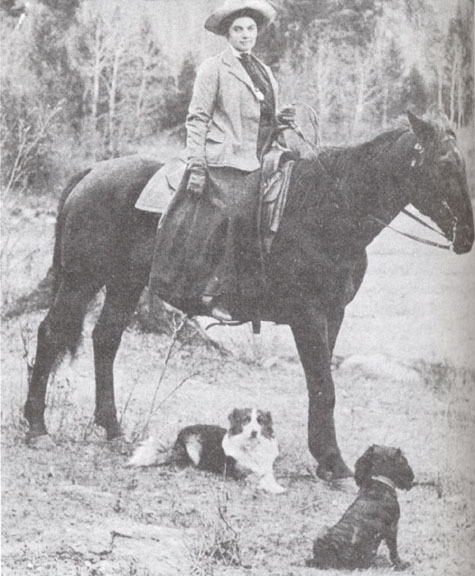 Emily Carr (December 13, 1871 – March 2, 1945) was a Canadian artist and writer inspired by the Indigenous peoples of the Pacific Northwest Coast.[1] One of the first painters in Canada to adopt a Modernist and Post-Impressionist painting style,[2] Carr did not receive widespread recognition for her work until the subject matter of her painting shifted from aboriginal themes to landscapes—forest scenes in particular.[1] As a writer, Carr was one of the earliest chroniclers of life in British Columbia. The Canadian Encyclopedia describes her as a "Canadian icon".[3]

Born in Victoria, British Columbia, in 1871,[4] the year British Columbia joined Canada, Emily Carr was the second-youngest of nine children born to English parents Richard and Emily (Saunders) Carr.[5][6] The Carr home was on Birdcage Walk (now Government Street), in the James Bay district of Victoria, a short distance from the legislative buildings (nicknamed the 'Birdcages') and the town itself.

The Carr children were raised on English tradition. Richard Carr, born in England, believed it was sensible to live on Vancouver Island, a colony of Great Britain, where he could practice English customs and continue his British citizenship. The family home was made up in lavish English fashion, with high ceilings, ornate mouldings, and a parlour.[7] Carr was taught in the Presbyterian tradition, with Sunday morning prayers and evening Bible readings. Richard Carr called on one child per week to recite the sermon, and Emily consistently had trouble reciting it.[8]

Carr's father encouraged her artistic inclinations, but it was only in 1890, after her parents' deaths, that Carr pursued her art seriously. She studied at the San Francisco Art Institute for two years (1890–1892) before returning to Victoria. In 1899 Carr traveled to London, where she studied at the Westminster School of Art. Before long she made friends with a fellow art student who lived in the same lodging house as her, Alice Watkins, nicknamed "Wattie". The other students called Emily "Motor", but to Wattie she was always "dear, dear Carlight". Emily disliked the noise and dirt of London and the snobbery she encountered here. "Do you know what hell would be like?" she once asked Wattie. "Hell would be London without you or Mrs Radcliffe." (Mrs Radcliffe, the aunt of friends in Victoria, had taken Emily under her wing, and later she found her and Wattie rooms which they shared for a few months.) When Wattie graduated and left London, Emily transferred her affections to another young woman at the art school, Mildred Compton. She became ill around this time and spent eighteen months in a sanatorium, followed by a year in the artists' colony of St Ives and six months at a school in Hertfordshire.

Carr also visited the Nootka Indian mission at Ucluelet on the west coast of Vancouver Island in 1898.[9] She traveled also to a rural art colony in St Ives, Cornwall, returning to British Columbia in 1905. Carr took a teaching position in Vancouver at the 'Ladies Art Club' that she held for no longer than a month – she was unpopular amongst her students due to her rude behaviour of smoking and cursing at them in class, and the students began to boycott her courses.[11]

In 1898, at age 27, Carr made the first of several sketching and painting trips to aboriginal villages.[12] She stayed in a village near Ucluelet on the west coast of Vancouver Island, home to the Nuu-chah-nulth people, then commonly known to English-speaking people as 'Nootka'.[12] Carr recalled that her time in Ucluelet made "a lasting impression on me". Her interest in indigenous life was reinforced by a trip to Alaska nine years later with her sister Alice.[12] In 1912, Carr took a sketching trip to First Nations' villages in Haida Gwaii, the Upper Skeena River, and Alert Bay.[9]

Determined to further her knowledge of the age's evolving artistic trends, in 1910 Carr returned to Europe to study at the Académie Colarossi in Paris. In Montparnasse with her sister Alice, Emily Carr met modernist painter Harry Gibb with a letter of introduction.[13] Upon viewing his work, she and her sister were shocked and intrigued[14] by his use of distortion and vibrant colour; she wrote: "Mr Gibb's landscapes and still life delighted me — brilliant, luscious, clean. Against the distortion of his nudes I felt revolt."[13] Carr's study with Gibb and his techniques shaped and influenced her style of painting, and she adopted a vibrant colour palette rather than continuing with the pastel colours of her earlier British training.[15]

Carr was greatly influenced by the Post-Impressionists and the Fauvists she met and studied with in France. After returning home in 1912, she organized an exhibition in her studio of seventy watercolours and oils representative of her time there. She was the first artist to introduce Fauvism to Vancouver.[16]

In March 1912 Carr opened a studio at 1465 West Broadway in Vancouver. When locals failed to support her radical new style, bold colour palette and lack of detail, she closed the studio and returned to Victoria.[17] In the summer of 1912, Carr again traveled north, to Haida Gwaii and the Skeena River, where she documented the art of the Haida, Gitxsan and Tsimshian. At Cumshewa, a Haida village on Moresby Island, she wrote:

Cumshewa seems always to drip, always to be blurred with mist, its foliage always to hang wet-heavy ... these strong young trees ... grew up round the dilapidated old raven, sheltering him from the tearing winds now that he was old and rotting ... the memory of Cumshewa is of a great lonesomeness smothered in a blur of rain. Emily Carr, Klee Wyck.

Carr painted a carved raven, which she later developed as her iconic painting Big Raven. Tanoo, another painting inspired by work gathered on this trip, depicts three totems before house fronts at the village of the same name. On her return to the south, Carr organized an exhibit of some of this work. She gave a detailed lecture about the aboriginal villages that she had visited, which ended with her mission statement:

I glory in our wonderful west and I hope to leave behind me some of the relics of its first primitive greatness. These things should be to us Canadians what the ancient Briton's relics are to the English. Only a few more years and they will be gone forever into silent nothingness and I would gather my collection together before they are forever past.[18]

While there was some positive reaction to her work, even in the new 'French' style,[19] Carr perceived that Vancouver's reaction to her work and new style was not positive enough to support her career. She recounted as much in her book Growing Pains. She was determined to give up teaching and working in Vancouver, and in 1913 she returned to Victoria, where several of her sisters still lived.[13]

During the next 15 years, Carr did little painting. She ran a boarding house known as the 'House of All Sorts'. It was the namesake and provided source material for her later book. With her financial circumstances straitened and her life in Victoria circumscribed, Carr painted a few works in this period drawn from local scenes: the cliffs at Dallas Road, the trees in Beacon Hill Park. Her own assessment of the period was that she had ceased to paint, which was not strictly true, although "[a]rt had ceased to be the primary drive of her life."[20]

Over time Carr's work came to the attention of several influential and supportive people, including Marius Barbeau, a prominent ethnologist at the National Museum in Ottawa. Barbeau in turn persuaded Eric Brown, Director of Canada's National Gallery, to visit Carr in 1927.[21] Brown invited Carr to exhibit her work at the National Gallery as part of an exhibition on West Coast aboriginal art. Carr sent 26 oil paintings east, along with samples of her pottery and rugs with indigenous designs.[22] The exhibit, which also included works by Edwin Holgate and A.Y. Jackson, traveled to Toronto and Montreal.

Carr continued to travel throughout the late 1920s and 1930s away from Victoria. Her last trip north was in the summer of 1928, when she visited the Nass and Skeena rivers, as well Haida Gwaii, formerly known as the Queen Charlotte Islands. She also travelled to Friendly Cove and the northeast coast of Vancouver Island, and then up to Lillooet in 1933. Recognition of her work grew steadily, and her work was exhibited in London, Paris, Washington, DC, and Amsterdam, as well as major Canadian cities.[23] Carr held her first solo show in eastern Canada in 1935 at the Women's Art Association of Canada gallery in Toronto.[24]

It was at the exhibition on West Coast aboriginal art at the National Gallery in 1927 that Carr first met members of the Group of Seven, at that time Canada's most recognized modern painters.[9] Lawren Harris of the Group became a particularly important support: "You are one of us," he told Carr, welcoming her into the ranks of Canada's leading modernists. The encounter ended the artistic isolation of Carr's previous 15 years, leading to one of her most prolific periods, and the creation of many of her most notable works. Through her extensive correspondence with Harris, Carr also became aware of and studied Northern European symbolism.[25]

Carr's artistic direction was influenced by the Group, and by Lawren Harris in particular, not only by his work, but also by his belief in Theosophy.[9] Carr struggled to reconcile this with her own conception of God.[26] Carr's “distrust for institutional religion” pervades much of her art.[27] She became influenced by Theosophic thought, like many artists of the time, and began to form a new vision of God as nature. She led a spiritual way of life, rejecting the Church and the religious institution. She painted raw landscapes found in the Canadian wilderness, mystically animated by a greater spirit.[27]

In 1924 and 1925, Carr exhibited at the Artists of the Pacific Northwest shows in Seattle, Washington. Fellow exhibitor Mark Tobey came to visit her in Victoria in the autumn of 1928 to teach an advanced course in her studio. Working with Tobey, Carr furthered her understanding of contemporary art, experimenting with Tobey's methods of full-on abstraction and Cubism, but she was reluctant to go to Tobey's extremes.[25][28][29]

I was not ready for abstraction. I clung to earth and her dear shapes, her density, her herbage, her juice. I wanted her volume and I wanted to hear her throb.[30]

Although Carr expressed reluctance about abstraction, the Vancouver Art Gallery, a major curator of Carr's work, records Carr in this period as abandoning the documentary impulse and starting to concentrate instead on capturing the emotional and mythological content embedded in the totemic carvings. She jettisoned her painterly and practiced Post-Impressionist style in favour of creating highly stylized and abstracted geometric forms.[28]

Carr suffered a heart attack in 1937, and another in 1939, forcing her to move in with her sister Alice to recover. In 1940 Carr suffered a serious stroke, and in 1942 she had another heart attack.[31] With her ability to travel curtailed, Carr's focus shifted from her painting to her writing. The editorial assistance of Carr's friend Ira Dilworth, a professor of English, enabled Carr to see her own first book, Klee Wyck, published in 1941.[9] Carr was awarded the Governor-General's Award for non-fiction the same year for the work.[32][33]

Paintings from Carr's last decade reveal her growing anxiety about the environmental impact of industry on British Columbia's landscape. Her work from this time reflected her growing concern over industrial logging, its ecological effects and its encroachment on the lives of indigenous people. In her painting Odds and Ends, from 1939 "the cleared land and tree stumps shift the focus from the majestic forestscapes that lured European and American tourists to the West Coast to reveal instead the impact of deforestation."[34]

Emily Carr suffered her last heart attack and died on March 2, 1945, at the James Bay Inn in her hometown of Victoria, British Columbia, shortly before she was to have been awarded an honorary doctorate by the University of British Columbia.[35] Carr is buried at Ross Bay Cemetery.