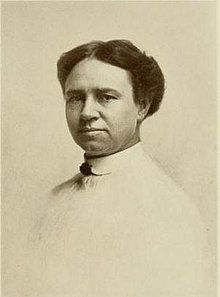 Dr. Ellen M. Osborn (February 14, 1868 – March 8, 1918) was not only versed in the branches of study relating to materia medica, surgery and anatomy, but she had a hopeful nature, cheerful disposition, and in a full measure the spirit of humanitarianism. To relieve suffering and bring back that glorious blessing of health to her patients was her main purpose in life.

Ellen Osborn was a Missouri woman. She was born in that State and lived there all her life, and while she was interested in public affairs and progress for women, would rather be able to say "I can make you well" than "I can vote." Believing in suffrage to a limited degree, when questioned closely, she said "that is not my line."

Attending the public schools at Union, MO, where she was born, until eighteen years of age, she entered Stevens' College in Columbia, remaining there for two years. After this she was engaged in teaching school near Gray's Summit for two years.

When a little girl, Ellen Osborn would wish to be a man so she could be a doctor, and later, when a teacher, she expressed the same desire, but her parents thought it most disgraceful for a young lady to entertain such ambitions, and persuaded her to "put her mind on other things," which she did — for a time. However, one of those little incidents occurred which sometimes turns the course of events in one's life and brings things to a climax. This was while she was teaching. Being connected with the St. Louis Baptist Association as a missionary organizer, in Franklin and St. Louis counties, for the Women's Mission Society, she had come to St. Louis to get the little "owl" banks for distribution to the different branches which she had formed, in which were to be deposited donations. These were in a large paper sack that she was carrying on her way to the station to take her train for home. Suddenly it began to rain very hard, and before she could find shelter the bag got so wet it broke and all the banks fell in the mud. By going back to the office for a new lot she missed her train and was obliged to stop over a whole day.

While waiting in the Baptist Association office she became acquainted with Dr. William Mayfield. He told her about his sanitarium in the city; that was the subject above all others about which she wished to hear. He invited her to visit the hospital, where she remained until train time, suggesting that later she might give up her school work and take up a course of training in nursing. This was the opportunity she had hoped for. How glad she was that she and the "owl" banks had been drenched in the rain! The desire to care for the sick and afflicted and minister to the wants of the suffering and helpless was so strong within her that only too slowly did the year of teaching drag on.

The next season she went to the Baptist Sanitarium to take the course as promised by Dr. Mayfield. After a year's work the wish to become a doctor — even though she were not a man — became so strong that she consulted with the doctor and he made arrangements for her to enter the St. Louis Woman's College, taking a three years' course and graduating in 1893.

At once she began practicing, locating in the vicinity of where the hospital now stands. Three prominent families in the neighborhood were her first patients, and through their influence she obtained many new ones. Before her practice became so extensive she did nursing for her own cases as well as others. The idea of a hospital came about in this way: Several out-of-town patients wanted to come to her to be operated upon and be taken into her home during the time of their treatment. The doctor agreed — but in order to do this it was necessary to rent a larger house.

Without a dollar to pay on the rent the day she contracted for it, she agreed to pay $35 a month.

The patients came and the rent was paid. As her practice grew larger she leased the beautiful building and grounds across the street from where the new hospital stands. Still her practice grew and it was decided to carry out her heart's desire — to build an up-to-date, fully equipped hospital of her own in the vicinity of where she had been so successful in establishing herself. The corner of 2800 North Taylor avenue was selected — facing east and west, and the corner-stone for the building was laid on April 1, 1906. During the whole of the month of March previous it had rained every day, the weather had been of the worst kind, but on the day of the dedication the sun shone gloriously, and about 500 persons witnessed the ceremonies, heard the songs and addresses rendered by different ministers and friends, and altogether Dr. Osborn says the day the corner-stone of the Ellen Osborn Hospital was laid was the happiest of her life. The new institution was begun under sunshiny prospects and has prospered ever since.

Dr. Osborn did general practice as well as surgery, and she attributed her success in no small measure to the fact that her former patients always brought new ones. One particular woman, whom she had taken in as a charity patient, had repaid her a hundred-fold, and was really the means of helping her establish the hospital. This woman sent her over 200 patients from the locality in which she lived. At that time it was greatly appreciated by Dr. Osborn.

Not all of her patients were women, although, of course, they constituted the greater part of her practice. The capacity of the hospital was for thirty-five in the main building, which was for surgery, and the adjoining building for contagious diseases accommodates twenty. They were always filled — unless sometimes during the months of January or February there may be a vacant room for a short time.

Operations were performed every day by Dr. Osborn and outside surgeons. The operating room and drug store adjoining were up to date in every respect. The doctor told about her first serious operation. It always made her smile to recall it. This was an abdominal section on a woman. Everything was most scrupulously prepared to insure against accidents of any kind, and although it was in the coldest part of the winter, she was dripping wet from perspiration when finished. The woman got well and the next effort was not so appalling.

By 1914 the hospital had boarded, nursed and treated 861 patients, most of them surgical cases. The mortality had been sixteen out of that number. Taking into consideration the
fact that some hopeless cases, as well as many of the most dangerous surgical operations, were brought in, the doctor had cause to take pride in this record.

The training school for nurses was under the best instructors in surgery and general medicine, obstetrics and dietetics. There were seven regular graduate nurses in attendance, while in the contagious department three were in training. In 1911 this school sent out five graduates.

Dr. Julia Bly and Dr. Edna Stone, one of the Eclectic School and the latter from the Barnes Medical College, were her assistants; her sister, Mrs. Elizabeth Brown (married to W.H. Brown), was the superintendent. Dr. Osborn was a member of the Tri-State Medical Society.

Dr. Osborn liked to work for those people who were afraid of operations and had an antipathy to hospital treatment; she wanted to show them that she could treat them successfully. Even hospitals had happy times; it was not all sadness — the patients were so grateful and appreciative when they went home relieved of their afflictions.

There was, too, an atmosphere of home about this little hospital — an absence of that formal and cheerless feeling one notices on entering most institutions of the kind. Perhaps this was partly due to its size by comparison, but the whole place seemed bright and sunny, and the nurses looked interested and contented.

The doctor said she owed much of her success to Dr. Augustus Charles Bernays, brother to Thekla M. Bernays, who was one of the most skillful surgeons in the country. His reputation was world wide. He was one of her professors. She could still see him demonstrating to her class — he would take a piece of chalk and illustrate so clearly during his lectures that, years later, she had but to close her eyes for a second to see him as she did then. In anatomy he was wonderful in many ways. The things that seemed so complex before his demonstrations became crystal clear after his explanations and were indelibly fixed in the minds of his hearers. His students had much to thank him for.

All useless words were dropped from his lectures, leaving only the bare analysis in such forcible and simple style that his meaning was thoroughly grasped, giving the pupils confidence in themselves. Dr. Bernays was a remarkably swift and dexterous operator, and he was a natural-born teacher. More than that, he was a lover and believer in nature and nature only. "To me more dear, congenial to my heart, one native charm than all the gloss of art," is how he felt always. Just as he laid bare the root of disease with his scalpel, so he cut out all the shams and hypocrisies of his profession.

Dr. Osborn's father was John Osborn. A Virginian by birth — and one of the first settlers of Franklin County in Missouri — he had always been a farmer living near Union, but in later years retired and moved to St. Louis.

Caroline Triplett was Dr. Osborn's mother. Six weeks after her parents came to Missouri, from Virginia, she was born. The parents of both Dr. Osborn's father and mother lived to be nearly one hundred years old. Two brothers and one sister, married, in Union, with the sister, Mrs. Brown, who was with her, comprise her family. They were all members of the Baptist Church.

The Sunday-school class of the Euclid Baptist Church, Dr. Osborn said, was her one recreation outside of her work. This was composed of forty women, and she taught them every Sunday. As to clubs, she had never belonged to one. She thinks they were all right for women who had nothing else to do. Women who had the intellectual capacity of following a profession rarely had time for other interests. Dr. Osborn had been serious and earnest in her calling.

Miss Georgiana Raby had acted as secretary to the Hospital Board and had rendered such valuable assistance to Dr. Osborn that she spoke of her in terms of warmest appreciation.

Dr. Osborn never married, and said she was "a hopeless old maid," and that she had never had time to think of getting married.