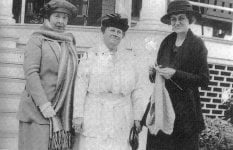 Ella Bertha Holmes was born on December 18, 1856, in New York, the daughter of Edwin Holmes[1] and Eliza Ann Richardson. She had two brothers and a sister.[2] Holmes later moved to Briarcliff Manor, New York, staying at the Briarcliff Lodge (her apartment was The Oak Room),[3][4] and when in New York City she would stay at the Waldorf-Astoria or the Plaza Hotel.[5]

On December 12, 1894, she married John Stuart White.[1] White died on May 19, 1897.[6] Holmes never remarried. Until her death she lived and travelled with Marie Grice Young, a piano teacher and fellow Titanic survivor whose pupils included the children of President Theodore Roosevelt.[7][8]

Ella Holmes White died in New York City on January 31, 1942 whilst living at the Plaza Hotel (with Young).[5] Her will left to Young, personal effects and life estate in a trust to yield US$250 ($3,751 in 2017 dollars) per month for life.[9] Historian Jonathan Ned Katz has suggested that Holmes had an intimate relationship with Marie Grice Young, in a time when same-sex relationships were usually kept very quiet.[10]

Ella Holmes White boarded the Titanic at Cherbourg with her maid Amelia Bissette and manservant Sante Ringhini. She travelled first class sharing a cabin with Marie Young. They also brought along some exotic French-bred chickens, intending to keep them at their New York country home.[11] White and her maid were rescued in lifeboat 8. Her manservant Sante Ringhini died.[12] She later testified before the American Inquiry that the Titanic had broken in two before sinking.[5]