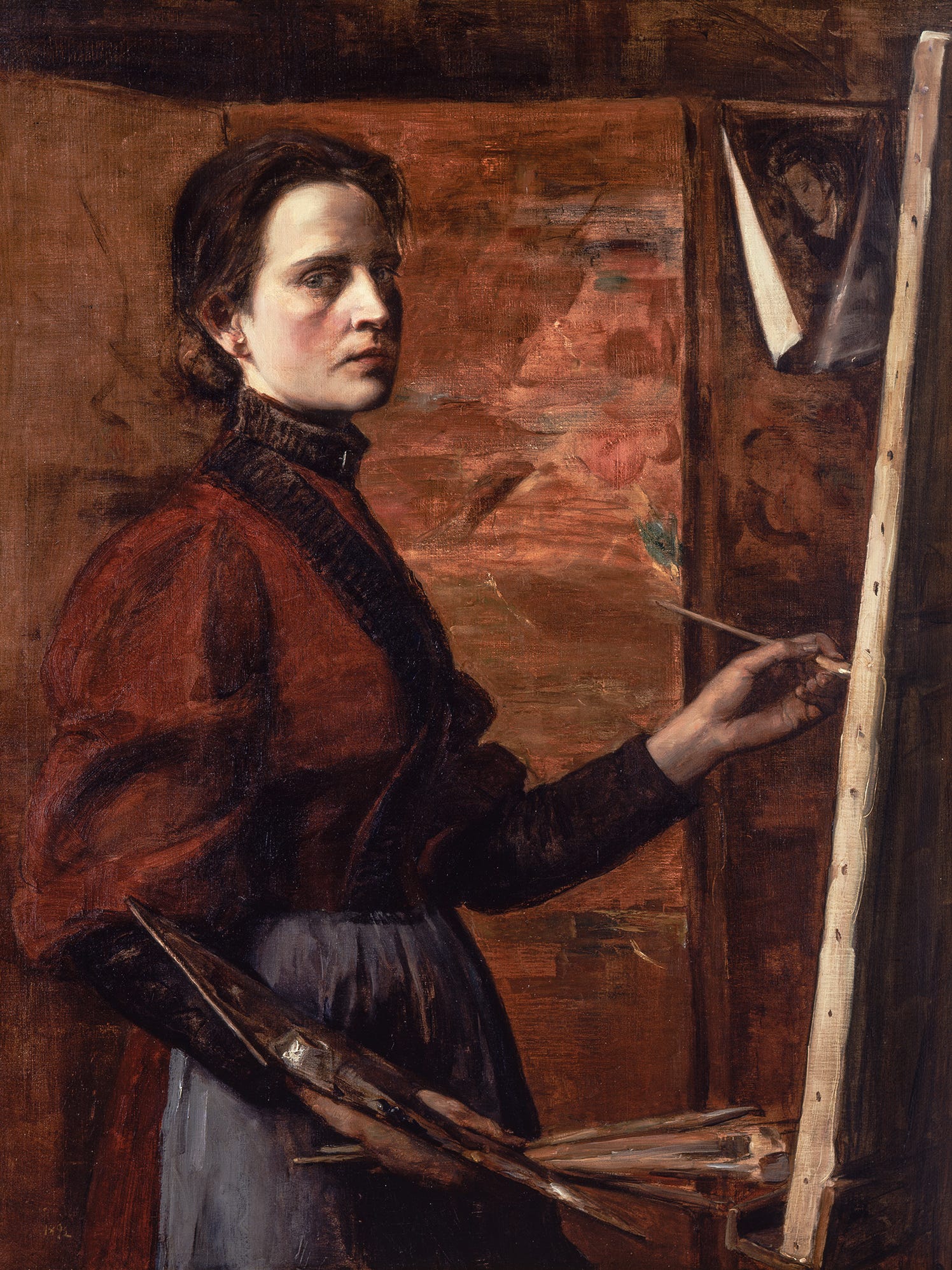 Elizabeth Nourse (October 26, 1859 – October 8, 1938) was a realist-style[1] genre, portrait, and landscape painter born in Mt. Healthy, Ohio, in the Cincinnati area. She also worked in decorative painting and sculpture. Described by her contemporaries as "the first woman painter of America" and "the dean of American woman painters in France and one of the most eminent contemporary artists of her sex,"[3] Nourse was the first American woman to be voted into the Société Nationale des Beaux-Arts. She also had the honor of having one of her paintings purchased by the French government and included in the Luxembourg Museum's permanent collection.[2][4] Nourse's style was described by Los Angeles critic Henry J. Seldis as a "forerunner of social realist painting."[5] Some of Nourse's works are displayed at the Cincinnati Art Museum.

Born to the Catholic household of Caleb Elijah Nourse and Elizabeth LeBreton Rogers (both descendants of pioneer New England families who were married in Cincinnati in 1833) on October 26, 1859, Elizabeth and her twin sister, Adelaide, were the youngest of ten children. She attended the McMicken School of Design in Cincinnati (now the Art Academy of Cincinnati) at age fifteen, and was one of the first women admitted to the women's life class offered there taught by Thomas Satterwhite Noble. She also studied watercolor painting while there. She studied at the school for seven years and was even offered a teaching position, which she declined in order to focus on her painting.[3] Her twin Adelaide studied only wood carvingand china painting in the classes inaugurated by Benn Pitman,a widower whom she married in 1882 when she was twenty-three and he was sixty. Pitman, an Englishman, was theyounger brother of Sir Isaac Pitman, inventor of shorthandwriting, who settled in Cincinnati to teach this method.

In 1882, both of her parents died, and with the assistance of an art patron, Anna Seaton Schmidt, she went to New York City to continue her studies, briefly in the Art Students League.[3] Here, she met William Merritt Chase and visited him in his studio. In 1883, she had returned to Cincinnati and made her living decorating home interiors and painting portraits. From 1884 – 1886, she spent most of her summers in Tennessee in the Appalachian Mountains doing watercolor landscapes.

In 1887, she moved to Paris, France along with her older sister, Louise, who was to be her lifelong companion, business manager, housekeeper and hostess. In Paris, she attended Académie Julian, studying under Gustave Boulanger and Jules Lefebvre. While studying in Paris Nourse became acquainted with fellow painter Caroline Augusta Lord.[6] Already having advanced skill when she arrived and having developed her style while in Cincinnati, she quickly finished with her studies and opened her own studio.[4][7] In 1888, her work was featured in her first major exhibition at the Société des Artistes Français. Her subjects were often women, mostly peasants, and depictions of France's rural countryside.

Though continuing to live and work mainly in Paris, Nourse travelled extensively around Europe, Russia, and North Africa painting the people she met.[4]

She was one of the "New Women" of the 19th century successful, highly trained women artists who never married, like Ellen Day Hale, Mary Cassatt, Elizabeth Coffin and Cecilia Beaux.[8] Hale, Nourse, and Coffin "created compelling self-portraits in which they fearlessly presented themselves as individuals willing to flout social codes and challenge accepted ideas regarding women's place in society. Indeed, the New Women portraits of the 1880s and 1890s are unforgettable interpretations of energetic, self-confident and accomplished women."[9]

In the fall of 1894 the Nourses found the studio where they were to live the rest oftheir lives, at 80 rue d'Assas facing the Luxembourg Gardens. Just aroundthe corner, on the rue de Chevreuse, was the clubhouse ofthe American Women Artists Association of Paris. Elizabeth served as its president in 1899-1900 and it was probably then that Mary Cassatt gave her a pastel inscribed: "To my friend Elizabeth Nourse."

At the start of the twentieth century Elizabeth Nourse and her elder sister (by six years) Louise were living in Paris but they would often escape the hustle and bustle of city life. They discovered the quiet countryside idyll of Saint Leger–en Yvelines, a village in the heart of the Rambouillet forest, fifty-five kilometres south-west of central Paris. They lived there in a simple cottage rented to them by the Lethias family.

During the first world war, Nourse defied the tendency of most American emigres to return home and remained in Paris, where she worked to assist the war's refugees and solicited donations from her friends in the United States and Canada for the benefit of people whose lives were disrupted by the war. In 1921, she was awarded the Laetare Medal for "distinguished service to humanity" by a Catholic layperson, an annual award from Notre Dame University in Indiana.[3]

As a final accolade the French government bought her painting, Les Volets Clos, for its permanent collection of contemporary art to hang in the Musee du Luxembourg with the work of such artists as Whistler, Winslow Homer, and Sargent.

Nourse retired and when her sister died in 1937, Elizabeth, who apparently could not imagine living without her, immediately became ill.[3] In 1920, she was operated on for breast cancer, and, in 1937, the cancer returned. She died on October 8, 1938.[10][11] She and her sister were buried next to each other in their beloved Saint Leger–en Yvelines. Her remaining paintings housed in her studio were returned to Cincinnati.