Elizabeth de Beauchamp Goudge FRSL (24 April 1900 – 1 April 1984) was a British author of novels, short stories and children's books. She won the Carnegie Medal for British children's books in 1946 for The Little White Horse.[1] After her parents died Elizabeth lived with a companion, Jessie Munroe, and in 1952 they moved into Rose Cottage in Peppard Common near Henley-on-Thames. The cottage is on Dog Lane which is very ancient, and was called Pack and Prime Lane, which it still is when it reaches Henley on Thames. Goudge was a popular author in both the UK and the US from the 1930s to the 1970s. She regained attention decades later. In 1993 one of her books was plagiarised by Indrani Aikath-Gyaltsen; the "new" novel set in India was warmly reviewed in The New York Times and The Washington Post before its source was discovered.[2] In 2001 or 2002 J. K. Rowling identified The Little White Horse as one of her favourite books and one of few with a direct influence on the Harry Potter series.[3][4]

Goudge was born on 24 April 1900 in Tower House in The Liberty of the cathedral city of Wells, where her father, Henry Leighton Goudge, was vice-principal of the Theological College. Her mother, Ida de Beauchamp Collenette (1874-1951) was originally from Guernsey. Ida met Henry while on holiday from there. The family moved to Ely when he became principal of the Theological College and then to Christ Church, Oxford when he was appointed Regius Professor of Divinity at the University. Elizabeth was educated at Grassendale School, Southbourne (1914–1918) and at the art school of University College Reading, then an extension college of Christ Church. She went on to teach design and handicrafts in Ely and Oxford.[5] After her father's death in 1939, Goudge and her mother moved into a bungalow in Marldon, Devon. They had planned a vacation there, but the outbreak of the Second World War led to them remaining. A local contractor built them a new bungalow in Westerland Lane, now known as Providence Cottage, where they lived for 12 years and she wrote several books, using Marldon based as a setting: Smoky House (1940), The Castle on the Hill (1941), Green Dolphin Country (1944), The Little White Horse (1946), and Gentian Hill (1949).[6] After her mother's death in 1951, she moved to Oxfordshire, spending the last 30 years of her life in a cottage on Peppard Common, outside Henley-on-Thames, where a blue plaque was unveiled in 2008.[7] She suffered with various health problems during the last years of her life – osteoarthritis and high blood pressure. In 1978 she had a fall in her cottage and injured her leg. After several more falls during the years and extended stays in the hospital in Reading, she died on 1 April 1984 in her beloved Rose Cottage. 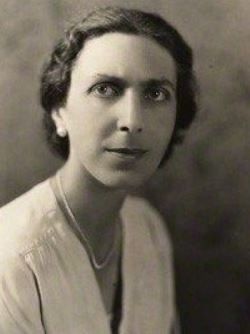 Facing solitude was the hardest thing she had yet confronted. It was something of which she had no experience and, ignorant of her own inability to cope, she tried for a while to battle on. Friends saw that she was failing. One of these, determined to help, tried to persuade Elizabeth to write to a single woman she knew who she thought would keep her company, at least for a while. Doubtfully, she did so, receiving an equally doubtful reply, but a promise nonetheless to pass the winter in Devon. And in this way Jessie Munroe entered her life: I went out into the garden and heard a very clear voice saying the words that are now so delightfully familiar. ‘I’m sorry I’m late.’ We looked at each other. I saw an upright, capable-looking young woman with a head of hair like a horse-chestnut on fire, and the white magnolia skin that goes with such hair. Her eyes were very direct. She looked young enough to be my daughter and I doubted if she would stand me for long, yet when I went to bed that night to my astonishment I found myself flooded with happiness, and slept deeply. Jessie has stood me for twenty-one years and has been the most wonderful event that ever happened to me. Thus in her final home near Oxford, together with Jessie and a succession of adored dogs, Elizabeth Goudge found peace in advancing age to write, to remember and to reflect on what she had gained and given to life. Her autobiography, The Joy of the Snow, came out in 1974. In it she struggled honestly and scrupulously to balance out the joys and the sorrows. The realisation that she would not marry was mitigated for her by the sense that the women of her generation had value in the workforce; she would not have argued with Mrs Fawcett’s view that war had liberated a generation – and surely the ‘women’s libbers’ of the 1970s had missed the point? For people like her it had all happened fifty years earlier. And though it had taken many years and much regret – for above all she had found it hard to bear the thought that she would never have children – she had learned to ‘recognise and deeply prize the blessings of a single life’ and to feel grateful: For the childless woman there is no lack of children in the world to love, even if they are not her own, and nothing to prevent a single woman experiencing the richness of falling in love now and again all her life. And indeed it is richness, for to every human being the pain of perhaps not having love returned is less important than the blessed fact of loving. Elizabeth Goudge loved bountifully: her mother and her father, her nanny, her friends, the many strangers who wrote to her about her books, her dear dogs, Jessie Monroe, and above all her God. There had been loss, grief and heartache, but as the title of her autobiography suggests, in this woman’s life joy tipped the scales.