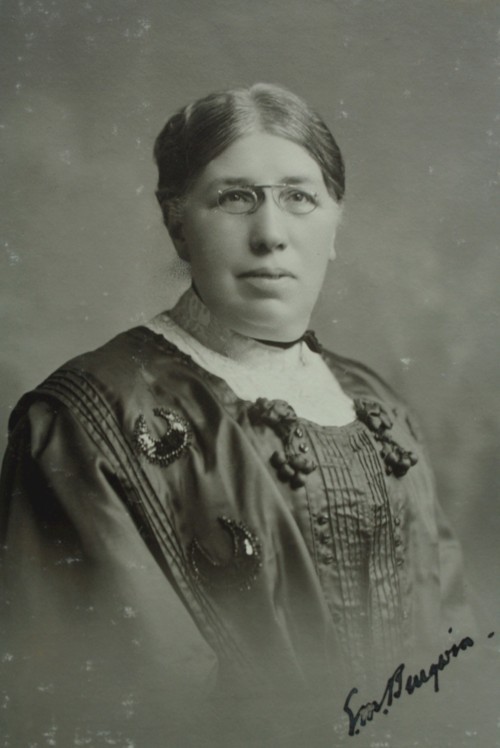 She was an educationist and became the Chief Superintendent for Special Schools of the London County Council Education Department.

She was born on 3 September 1850 at Occold, Suffolk, the second child of Samuel Canham, an agricultural labourer, and his wife, Miriam. After moving to London at 14 years old, she attended the Practising School attached to Whitelands Training College, assisting in lessons at St Luke’s Parochial Girls’ School in Chelsea. In Lux Mihi Laus, former School Board for London Inspector, Thomas Guatery’s biography of the SBL, recalled a conversation with a Head Master who had been one of Elizabeth’s former peers at Whitelands, ‘Burgwin’ described the Head Master was, ‘when a pupil teacher, bossed us all – head teacher, assistants, and pupil teachers,’ ‘well,’ Guatery said ‘I’ve no doubt you liked being bossed by her, as everybody else has throughout her long career.’

In 1873, three years after the introduction of the Education Act, which introduced schooling for all five to ten year olds, Burgwin at the age of 23 became Head Teacher of one of London’s first elementary schools Orange Street in Borough. What she found in her South London classrooms was that it was all very well to build schools and create an ‘army’ of teachers but if children’s physical welfare was not also given equal attention then there was no child to teach. In 1886 she recalled how upon starting classes the children were, ‘so weakly and so restless…that if I did succeed in getting them to attend they slept…I called in a doctor to talk about the children…and he said, “well they are decidedly hungry.”’ The doctor’s diagnosis meant Burgwin felt obliged from as early as 1874 to ‘have provided dinners for them quite free.’

Throughout the first thirty years of the Education Act Burgwin gained a reputation for demonstrating ‘a marked improvement in the child, in its tone and in its whole bearing’ by devising a feeding programme. While she was not the first to offer hot meals to poor children, she was the first to offer it to them for free, because, ‘positively hundreds of our homes are without a penny in them in the morning when the people get up.’ To charge meant, ‘a hungry child stood aside,’ while those ‘who should have their feet under their mother’s table’ would be subsidised by her efforts. In 1880 her dinners became a public campaign, receiving financial backing from the investigative journalist George Sims and his newspaper The Referee for the newly created Children’s Free Breakfast and Dinner Fund.

Throughout the development of what would become the largest London Society for free school meals, Burgwin was an active member of the National Union of Elementary Teachers (NUET) and the Metropolitan Board Teachers Association (MBTA), in which she sought to highlight the challenges of the Victorian classroom. She was especially concerned with highlighting the importance (for both child and school) of the teacher being given autonomy in ‘exempting’ some children from annual examination, by ‘classifying’ their abilities.

In 1885 Burgwin, was one of the first teachers to declare publicly, through a well-publicised speech at the MBTA’s annual conference, the need to feed and medically and intellectually classify children in order for them to progress in school. In the same year she was also elected as the first woman to the Executive Committee of the NUET. By the time she stood as a witness for the Cross Commission (set up to look into the workings of the Education Act) in 1886 she was, therefore, well acquainted with some of its Commissioners such as Thomas Heller and Lyulph Stanley (who, when working for the SBL had represented her Division: Southwark). In 1891, her commitment to accurate classification and experience of managing a school like Orange Street made her a prime candidate for the SBL’s newly created role of Chief Superintendent of Special Schools, which she would hold until her retirement in 1916.

Burgwin was a strong opponent of the cause and tactics of the female suffrage movement; she was a member of the executive committee of the National League for Opposing Woman Suffrage. In 1912 she was an outspoken critic of a motion at the NUT annual conference in favour of votes for women. She was also opposed to the provision of sex education for elementary pupils, arguing in evidence to a London county council sub-committee in 1914 that it was the responsibility of parents rather than teachers to bring up their offspring ‘in a healthy manner.