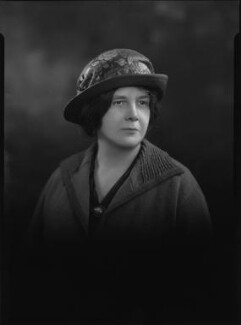 Elizabeth Brister Banks (May 2, 1872 – July 18, 1938) was an American journalist and author. Although she never renounced her American citizenship, she remained in England throughout the last forty years of her life. She took stunt-reporting to Britain in the early 1890s, becoming one of London’s best-known journalists. Through the medium of her inventive cross-class masquerades, Banks disclosed the underside of women’s industrial labours; she published a photo gallery of her different investigative selves in her Campaigns of curiosity: Journalistic adventures of an American girl in London (1894).

Elizabeth was born in Trenton, New Jersey, the daughter of John Banks and Sarah Ann Brister.[1] As a young child, she was raised by her aunt Elizabeth Brister and uncle Joseph Peck on "the experimental farm" north of Madison near Deansville, Wisconsin. She attended Milwaukee Downer Female Seminary College in Milwaukee when it was still located at Fox Lake, Wisconsin. She became a typewriter girl in a grocery store, then worked society pages in Baltimore and Saint Paul, Minnesota. She worked as secretary at the American Counsulate in Peru, later becoming a stunt journalist when other women writers were relegated to society and fashion pages. In London, she became a regular contributor to publications such as The Daily News, Punch, St James' Gazette, London Illustrated, and Referee. She created a sensation in London by recording her observations on the plight of the lower classes, which she researched posing as a housemaid, street sweeper, and Covent Garden flower girl. Her journalistic writing under several pen names including pseudonyms of Mary Mortimer Maxwell and Enid, unceasingly promoted women's right to vote and denounced prison conditions for jailed suffragettes. Elizabeth lived in London at 17 Downing Street, close to the Prime Minister's residence. Her neighbors and friends included George Bernard Shaw, John Galsworthy, Thomas Hardy, H.G. Wells and suffragette Henrietta Marston. She made major contributions to British Intelligence in developing strategies to help protect London from German aerial attacks and developing propaganda schemes that helped draw the United States into the first world war. At the height of her career Banks lived at 5 Robert Street in the Adelphi area between the Strand and the Thames.

In 1914 she founded the Authors' Belgian Fund and Dirk's fund for the Allies. She originated and also wrote a series of controversial essays entitled "The Lady at the Round Table". She made a trip back to the United States and became the author of an autobiographical work, The Remaking of an American. She also wrote "Campaigns of Curiosity" and "Newspaper Girl". Careful to protect her sources in both her letters and written works, the bulk of her personal papers were destroyed upon her death. She died on Jul 18, 1938 of arteriosclerosis and then was cremated with her ashes deposited at Golders Green Crematorium.