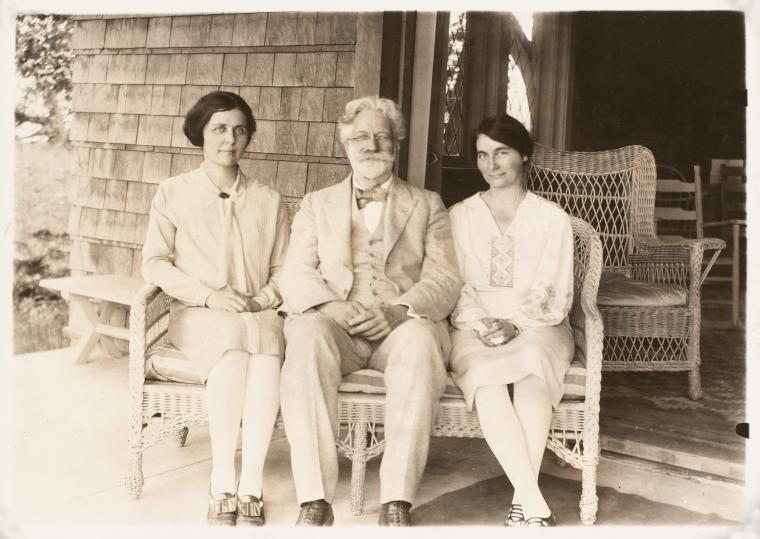 Elizabeth Ames (1885 – March 28, 1977) transformed Yaddo, a philanthropist's vast estate in Saratoga Springs, N.Y., into a retreat that nurtured many of the nation's leading creative artists. She was the executive director of Yaddo from its beginnings as a creative haven in 1924 until her retirement in 1969. It was more than just a woodsy retreat that Ames made of the 400‐acre estate of Spencer and Katrina Trask with its imposing 54‐room mansion and dozens of other buildings. “Above everything,” Ames said in 1926, when Yaddo began receiving its first creative guests, “we have wished to avoid the name and atmosphere of a conventional ‘colony’ or ‘retreat.’ Yaddo is to remain what it was during the lifetime of the Trasks, a splendid private home, where a small ‘house party’ of friends may feel wholly at ease to work or play, as the mood suggests.”

That "house party" kept going for more than 50 years. As John Cheever, who was a guest at Yaddo first in 1934, said, the Yaddo idea worked because Ames had a "profoundly intuitive grasp of what one needed." "When Ames undertook to open and manage Yaddo there was no precedent," added Cheever, who completed his work, "Falconer," there. "She invented an administration so intelligent and comprehensive that at times when one found seven writers of vastly different temperaments working happily under the same roof it seemed magical. "It wasn't magic at all," Cheever continued. "It was common sense, hard work and giftedness. This is much more than conscientious stewardship of a will, much more than a friendly feeling for the arts. This is a life and a triumph."

Born in Minneapolis, the daughter of a lawyer who had moved west from upstate New York, Elizabeth Knappen graduated from the University of Minnesota and married John Carroll Ames in 1918. Their brief marriage ended with his death in World War I. In the early 1920s Elizabeth Ames went to Saratoga Springs to visit her sister, Marjorie Waite, who was then working for George Foster Peabody (Peabody would later adopt Marjorie). Peabody had married Spencer Trask's widow and was in the process of carrying out the Trask wish of turning the estate into a creative center. Peabody asked Ames to draw up a suggested plan and was so impressed with her effort that he made her executive director of the Corporation of Yaddo. Yaddo began with only a half dozen artists and was open only in the summer. Ames wanted to help artistic people and she wanted to help the public to gain a better understanding of creative work.

In 1932, she started a series of music festivals open to the public that were to be an annual event at Yaddo for 20 years. Ames started the festivals because she felt modern music was not being heard or understood. The festivals drew wide public interest and -- as to their effect -- Aaron Copland, in his biographical essay, "Composer From Brooklyn," said: "These proved to be the first of a series of efforts toward the improvement of the economic and artistic status of the American composer."

Ames was a friend and confidante to many artists, writers and composers. She was also a strong and determined woman. "Remarkably sophisticated," is the way Curtis Harnack, once a Yaddo guest himself and later executive director after Ames, recalled her. "She was a great storyteller in a Jamesian sense. She could hold an audience enthralled with stories of the early days of Yaddo. She was a commanding presence, sometimes awesome, sometimes forbidding to those who didn't know her."

Many writers expressed their gratitudes to Ames in print. Carson McCullers was a guest 12 times at Yaddo and the dedication of one of her books, "A Member of the Wedding," reads "for Elizabeth Ames." Philip Roth, another guest, dedicated his 1972 novel, "The Breast," to Elizabeth Ames and Yaddo, "the best friends a writer could have." In a copy of "Stude Lonigan," James T. Farrell has inscribed: "Dear Mrs. Ames: For the opportunity to have completed this book I am indebted to you and to Yaddo -- I hope it have some merits in order justify that indebtedness."

In 1959, the National Institute of Arts and Letters gave Ames its award for distinguished service to the arts. The citation with the award read: "Through a lifetime of association "with artists she has learned to provide for their needs and handle their conflicting temperaments with the utmost grace and sympathy."

To Harnack, who worked his first novel at Yaddo in it was Ames's strength that made Yaddo work seemingly by itself without organization. "The period from 9 a.m. p.m. was reserved for work with no outside visitors and never went into someone else's quarters without an invitation," Harnack said. "Those were about the only rules. "You were not required to produce anything. If it was for you to sit and do nothing could do just that."

Among the other guests at Yaddo during Ames' were Leonard Bernstein, Virgil Thomson and Roy Harris, composers, and Milton Avery and Philip Guston, painters.