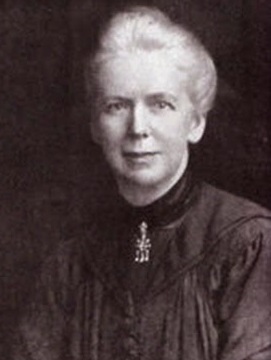 Raised as a High Anglican, she also had interests in mysticism.[3] She rose to fame following a claim that she and a fellow teacher, Charlotte Anne Moberly, had slipped back in time to the period of the French Revolution while on a trip to Versailles, known as the Moberly–Jourdain incident. She and Moberly wrote a book together about the experience. The book was published pseudonymously; their identity was not revealed until the mid-1920s, after Jourdain's death. The book was a best seller but attracted much criticism. Jourdain was in Rome in 1912 with the family of Joan Evans, the art historian, and Evans remained loyal to Jourdain thereafter. She died of a sudden heart attack in 1924 after being forced to resign her post at St Hugh's College over an administrative decision, leaving Evans as her residuary legatee.[4]

Born in Ashbourne, Derbyshire on 16 November 1863, Jourdain's father was Francis Jourdain (1834–1898), a vicar and her mother, Emily, was the daughter of Charles Clay.[1] Jourdain was the first of ten children.[5] There were at least two sisters: Charlotte, who had been one of St Hugh's College's first four students,[6] and Margaret Jourdain, a writer on English furniture and decoration.[3] Her brother Philip Jourdain was a prolific editor for The Monist.

Jourdain attended a private day school in Manchester, and later, in 1883, studied at Lady Margaret Hall, Oxford. In 1886, she defended her thesis becoming the first women to undergo a viva in the school of modern history.[1]

She began her career as secretary to the wife of the Archbishop of Canterbury, Minnie Benson. Then she advanced to assistant mistress at Tottenham High School and later to Clifton High School. In 1892, she and M. A. Woods, co-founded Corran Collegiate School in Watford,[7] as private boarding- and day school for girls. By 1900 the school had 100 pupils, and Jourdain had become the Headmistress.[1] Jourdain left in 1903[7] and moved to Paris and spent a year studying the symbolism in Dante's Divine Comedy. She published articles in both French and English on her research and was awarded a doctorate in 1904 from the University of Paris based on her research. She was then invited by another Oxford alumna, Charlotte Anne Moberly, who was acting principal of St Hugh's Hall to come to St Hugh's as vice principal.[1]

In 1905, she began tutoring French at St Hugh's and serving as vice principal. Beginning at around 1908, she was a leader in the suffrage movement for St Hugh's, often attending demonstrations in London in her doctoral robes. She also continued to publish and presented such works as 'Methods of moral instruction and training of girls in France' in Moral Instruction and Training in Schools, edited by M. E. Sadler (1908, 2.85–112); On the Theory of the Infinite in Modern Thought (1911), An Introduction to the French Classical Drama (1912). In April 1915, she replaced Moberly as principal at St. Hugh's and during World War I accepted a position to work as a translator for the government. Beginning in 1920, she lectured in French at Oxford, becoming one of the first women to hold university lectures. Between 1921 and 1922, she was the president of the Modern Language Association and in 1922, became the first woman to conduct undergraduate examinations.[1]

Jourdain was an autocratic leader and in November 1923, she persuaded the college council to fire a tutor, Cecilia Mary Ady, whom she thought was challenging her authority. Ady protested her wrongful termination causing all the tutors and several council members to resign, as well as resulting in boycotts by tutors at other Oxford affiliated schools. The ensuing situation was widely reported in the press and an investigation, initially welcomed by Jourdain, was undertaken. When it became evident that she would be asked to resign, Jourdain suffered a heart attack and died on 6 April 1924. She was buried in Wolvercote Cemetery, Oxford.[1]