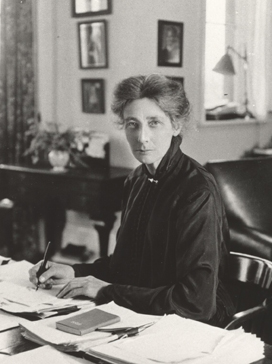 Eleanor Constance Lodge, CBE, was born on 18 September 1869 at Hanley, Staffordshire. She was Vice-Principal of Lady Margaret Hall, Oxford from 1906 to 1921 and then Principal of Westfield College, Hampstead, in the University of London from 1921-31.

She studied History at Lady Margaret Hall until 1894. In 1895, Elizabeth Wordsworth asked her to come back to Lady Margaret Hall, where she became a librarian.[1]. She then studied in Paris, at the École des Chartes and the École des hautes études en sciences sociales, 1898-1899.[1] In 1899, she started teaching History at LMH as a tutor, and was appointed as vice-principal in 1906.[1] Although she expected to be appointed as the principal after Henrietta Jex-Blake retired, this didn't happen, and she decided to leave Oxford. She asked for a teaching job in Westfield College, London. She was in fact appointed as principal of this college, in succession to Bertha Phillpotts, in 1921.[1]

She was the first woman recipient of a D.Litt. by the University of Oxford, in 1928, which was awarded for her work in the field of modern history.[1] Eleanor Lodge, who went to Oxford with Eleanor Rathbone, wrote in her autobiography, Terms and Vacations, after visiting the Rathbone family at their Greenbank home, “The effect of a butler opening the door to me was almost paralysing, but Mr. and Mrs. Rathbone were kindness itself, and I came to admire and love their daughter Eleanor…”