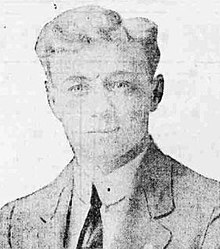 Edward Arthur Dorking (June 18, 1893 – April 12, 1954) was a passenger on RMS Titanic and a survivor from the sinking. Originally from England, he toured the United States and Canada with a vaudeville show. He then fought in World War I and World War II, surviving both, and died in prison in 1954.

Dorkings boarded the Titanic at Southampton on April 10, 1912, as a Third Class passenger.[3] He was emigrating to the United States to live with his uncle and aunt, Fred and Violet Cooke, in Oglesby, Illinois.[2] He survived the sinking swimming for 35 minutes to lifeboat B and was later rescued by the Carpathia.[4][5][1] Apparently he was the last man to leave the Titanic.[2][6][7] He testified before the United States investigating committee and the British investigation.[8]

According to his relatives, Dorking was openly gay and that was the reason why the family was sending him off to the United States.[1]

After the sinking Dorkings appeared on theaters with a tour of the Sullivan & Considine circuit, talking about the experience, like at Princeton, New Jersey, Fort Collins, Colorado, Salt Lake City, Utah,[8][9][10][11][12], Ogden, Utah,[13] San Francisco, California,[5] Los Angeles, California,[14] Portland, Oregon,[15][16] Decatur, Illinois,[17] Moline, Illinois, Tacoma, Washington,[18] Davenport, Iowa,[19] and Vancouver.[20] He described his profession as "Vaudeville".[1][2] According to him, none of the victims was to receive damages from the White Star commpany, and that was the reason why he was touring the theaters, to repay what he had lost.[21]

After World War I he moved to Los Angeles, apparently after a run-in with the police in Chicago. In 1933 he was still living in Los Angeles and with his military pension entered a soldier's home in Sawtelle, Los Angeles.[1]

He was drafted in 1942 to fight in World War II. Estranged from his family, Dorking spent his final days in prison on Terminal Island, San Pedro, California, and died April 12, 1954, on the anniversary of the sinking.[1]