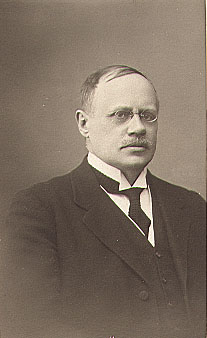 Edvard Alexander Westermarck (November 20, 1862 – September 3, 1939) was a Finnish philosopher and sociologist. Among other subjects, he studied exogamy and the incest taboo. He advocated for equal rights for women and homosexuals, regarding all people of equal value. He is known for the "Westermarck effect," namely that people raised as siblings do not regard the other as potential sexual partners.

Westermarck made a significant contribution to a difficult and confused area of human social relationships. However, he did not recognize the importance of the role of parents, which more recent sociology has substantiated./p>

EEdvard Westermarck was born in Helsinki, Finland, into a family of college professors. His father taught Latin at the University of Helsinki, and his mother was the daughter of a professor of the History of Learning. Due to his fragile health, Westermarck tended to prefer books and reading over physical activities, and that naturally turned him toward academia.

Westermarck graduated from the Swedish lyceum or high school in 1881, and entered the University of Helsinki where he earned his Ph.D. in 1890. He studied English in order to read books by Darwin and other British writers in their native language. In 1887, he visited England after which he wrote his dissertation—The Origins of Human Marriage—which opened a door for him into academic circles. He became close friends with Edmund Gosse and James Sully, who played important roles throughout Westermarck’s life.

FFrom 1907 until 1931, Westermarck was a professor of sociology at the London School of Economics and Political Science. He was also a visiting professor of practical philosophy at the University of Helsinki (from 1906 to 1918). In 1918, he moved to Turku, and became a professor at the local university there.

Westermarck made several field trips to Morocco, studying local customs and beliefs. He published several books based on those trips, including Marriage Ceremonies in Morocco (1914), Ritual and Belief in Morocco (1926), and Wit and Wisdom in Morocco (1931).

WWestermarck never married, and his homosexual orientation was well known in London (Liukkonen, n.d.). In some of his works, he argued for homosexuality as a natural sexual tendency. After his retirement in 1931, Westermarck continued publishing. He died in 1939 in Tenhola, Finland.

Westermarck's work can be divided into two major spheres: philosophy and sociology/anthropology.

As a philosopher, Westermarck mainly worked in the field of moral philosophy. His two-volume i>The Origin and Development of Moral Ideas (1906 – 1908) dealt with the problem of human morality. It argues that there is no absolute standard of morality, and that people act more through emotion than reason. Westermarck regarded moral judgment as based on the human emotional experience of approval and disapproval. When a certain moral decision is followed by an approval of others, people tend to continue to make those moral decisions. Disapproval on the other hand, negatively reinforces such decisions. For Westermarck, morality is not absolute or universal to all people. Westermarck based his claims on his anthropological and sociological research, combining different social sciences in an attempt to make philosophy more scientific.

Westermarck was a fierce critic of Christianity, especially the idea that only Christians possess absolute truth, and because of that truth, scientific progress was possible. Westermarck believed the Enlightenment as the reason for such progress. He never really practiced any religion, remaining agnostic throughout his life.

In his major philosophical work i>Christianity and Morals (1939), Westermarck expressed his views on religion and particularly Christianity. He also argued that homosexuality was a part of normal sexual behavior. In the same book, Westermarck advocated female equality with men. He wrote:

It has taken nearly 2000 years for the married woman to get back that personal independence which she enjoyed under the later Roman Law, but lost through the influence which Christianity exercised on European legislation. And it may be truly said that she regained it, not by the aid of the churches, but despite the opposition.

WWestermarck is well-known for his studies on marriage, exogamy, and the incest taboo. Through his research, he became convinced that primitive human societies were monogamous, and in The History of Human Marriage, argued that universal human promiscuity was a myth. He claimed instead that the basic unit of human society has always been the nuclear family.

His most well-known idea was what came to be known as the "Westermarck effect." This effect is best understood starting with sexual imprinting. Sexual imprinting is the process by which a young animal learns the characteristics of a desirable mate. For example, male zebra finches have been shown to prefer mates with the appearance of the female bird that rears them, rather than mates of their own type (Immelmann, 1972). The Westermarck effect is a kind of "reverse" sexual imprinting, seen when two people live in close domestic proximity during the first few years in the life of either one, resulting in desensitization to later close sexual attraction and bonding between them.

The Westermarck effect has since been observed in many places and cultures, including in the Israeli kibbutz system, and the Shim-pua marriage customs of Taiwan, as well as in biologically related families. In the case of the Israeli kibbutz farms, children grew up in a common children's house, away from their parents. They spent the entire day and night together. This resulted in a generation that was not interested in the opposite sex within their class. However, this is an extreme example of grouping since their parents were also removed from the environment.

When this does not occur, for example where a brother and sister are brought up not knowing about one another, they may find one another highly sexually attractive when they meet as adults—a phenomenon known as genetic sexual attraction. This observation is consistent with the theory that the Westermarck effect evolved to suppress inbreeding./p>

TThis idea brought Westermarck in conflict with Sigmund Freud. Freud argued that members of the same family naturally lust for one another, making it necessary for societies to create incest taboos. Psychoanalysts have continued to support the Freudian concept, arguing that such taboos would obviously be meaningless if there was no desire to perform the acts in question.

Westermarck, however, argued the reverse, that the taboos themselves arise naturally as products of a simple inherited epigenetic response. Subsequent research over the years has supported Westermarck's observations and interpretation.

WWestermarck left a visible mark on the development of both Finnish and European modern philosophical and sociological thought. As a philosopher, Westermarck worked on a scientific basis for moral philosophy, approaching it from the anthropological and ethnological side, and grounding morality in emotion rather than reason. This added a more human component to philosophy, which is continued in the strains of psychology, sociology, anthropology, and other social sciences that have been included in the modern philosophical paradigm.

His sister, Helena Westermarck, was a writer and artist.