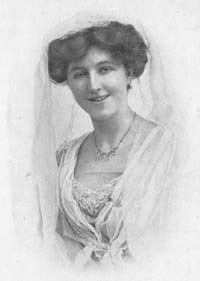 Dorothy Lawrence (4 October 1896 – 4 October 1964) was an English journalist who posed as a male soldier in order to report from the front line during World War I. She managed to obtain a Khaki soldier uniform from a friend, as well as getting a false identity. However trench life affected her health, and she later revealed her gender, afraid that if she needed medical attention her true identity would be discovered and those who helped her would be punished. After revealing herself she was suspected of being a spy and was held under arrest until after the battle. She was then sent home under a strict agreement not to publish her experiences. Lawrence slowly began to lose her sanity and in the end eventually ended up dying in an insane asylum.

Lawrence was born in Hendon, Middlesex,[1][3] of parents unknown. Probably illegitimate, she was adopted as a baby by a guardian of the Church of England.[2]

There is some discrepancy in her parentage. The Oxford Dictionary of National Biography (which at time of publication in 2004 did not mention details of her life after 1919) reports that Lawrence was born on 4 October 1896 in Polesworth, Warwickshire and was the second daughter of Thomas Hartshorn Lawrence and Mary Jane Beddall.

Wanting to be a journalist, she had success in having some articles published in The Times.[2] At the outbreak of war she wrote to a number of the Fleet Street newspapers in the hope of reporting the war.

Travelling to France in 1915,[1][2] she volunteered as a civilian employee of the Voluntary Aid Detachment but was rejected.[1] Deciding to enter the war zone via the French sector as a freelance war correspondent, she was arrested by French Police in Senlis, 2 miles (3.2 km) short of the front line, and ordered to leave.[1][4] Spending the night sleeping on a haystack in a forest,[1] she returned to Paris where she concluded that only in disguise could she get the story that she wanted to write:[5]

I'll see what an ordinary English girl, without credentials or money can accomplish.

She befriended two British Army soldiers in a Parisian café, and persuaded them to smuggle her a khaki uniform, piece by piece, within their washing; ten men eventually shared in this exploit, later referred to in her book as the "Khaki accomplices".[1][6] She then began practising transforming herself into a male soldier, by flattening her figure with a home-made corset; using sacking and cotton-wool to bulk out her shoulders; and persuaded two Scottish military policemen to cut her long, brown hair in a short military style. She darkened her complexion with Condy’s Fluid, a disinfectant made from potassium permanganate; razored the pale skin of her cheeks in the hope of giving herself a shaving rash; and finally added a shoe-polish tan. Finally she asked her soldier friends to teach her how to drill and march.[2][6]

Wearing a blanket coat and no underwear, lest soldiers discover her abandoned petticoats, she obtained forged identity papers as Private Denis Smith of the 1st Bn, Leicestershire Regiment, and headed for the front lines.[1][2][7]

Targeting the British sector of the Somme, she set out by bicycle.[2][6] On her way towards Albert, Somme, she met Lancashire coalminer turned British Expeditionary Force (BEF) tunnel-digging sapper Tom Dunn, who offered to assist her.[2] Fearing for the safety of a lone woman amongst female-companionship starved soldiers, Dunn found Lawrence an abandoned cottage in Senlis Forest to sleep in. During her time on the frontline, she returned there each night to sleep on a damp mattress, fed by any rations that Dunne and his colleagues could spare.[2][6]

In her later book, Lawrence writes that Dunn found her work as a sapper with the 179 Tunnelling Company, 51st Division, Royal Engineers,[2] a specialist mine-laying company that operated within 400 yards (370 m) of the front line.[2][6] Lawrence writes that she was involved in the digging of tunnels.[6] But later evidence and correspondence from the time after her discovery by British Army authorities, including from the files of Sir Walter Kirke of the BEF's secret service, suggest that she did not undertake this highly skilled digging work, but was at liberty and working within the trenches.[2]

The toll of the job, and of hiding her true identity, soon gave her constant chills and rheumatism, and latterly fainting fits.[2] Concerned that if she needed medical attention her true gender would be discovered and the men who had befriended her would be in danger, after 10 days of service she presented herself to the commanding sergeant, who promptly placed her under military arrest.[2]

Taken to the BEF headquarters and interrogated as a spy by a colonel, she was declared a prisoner of war. From there she was taken cross country by horse to Third Army headquarters in Calais,[2] where she was interrogated by six generals and approximately twenty other officers. She was ignorant of the term camp follower (one meaning of which is "prostitute") and she later recalled "We talked steadily at cross purposes. On my side I had not been informed what the term meant, and on their side they continued unaware that I remained ignorant! So I often appeared to be telling lies."[8]

From Calais she was taken to Saint-Omer and further interrogated. The Army was embarrassed that a woman had breached security and was fearful of more women taking on male roles during the war if her story got out. On the orders of a suspicious judge, fearing she could release sensitive intelligence, he ordered that she remain in France until after the Battle of Loos.[1] Held within the Convent de Bon Pasteur, she was also made to swear not to write about her experiences, and signed an affidavit to that effect, or she would be sent to jail.[1] Sent back to London, she travelled across the English Channel on the same ferry as Emmeline Pankhurst, who asked her to speak at a suffragette meeting.[2][6]

Once in London, she tried to write about her experiences for The Wide World Magazine, a London-based illustrated monthly, but had to scrap her first book on the instructions of the War Office, which invoked the 1914 Defence of the Realm Act to silence her.[2] She later commented:[9]

In making that promise I sacrificed the chance of earning by newspaper articles written on this escapade, as a girl compelled to earn her livelihood.

In 1919, she moved to Canonbury, Islington, and published an account of her experiences: Sapper Dorothy Lawrence: The Only English Woman Soldier.[4][10] Although well received in England, America and Australia,[2] it was heavily censored by the War Office, and with a world wishing to move forward it did not become the commercial success that she wanted.[2][6]

With no income and no credibility as a journalist, by 1925 her increasingly erratic behaviour was brought to the attention of the authorities. After confiding to a doctor that she had been raped in her teenage years by her church guardian, and with no family to look after her, she was taken into care and later deemed insane. Committed first to the London County Mental Hospital at Hanwell in March 1925, she was later institutionalised at the Colney Hatch Lunatic Asylum in Friern Barnet, north London.[2][6] She died at what was by then known as Friern Hospital in 1964.[1][6] She was buried in a pauper's grave in New Southgate Cemetery, where today the site of her plot is no longer clear.[2]

In 2003, Richard Bennett, the grandson of Richard Samson Bennett who was one of the soldiers who had helped Lawrence in France, found note of her within the correspondence files of Royal Engineers Museum in Chatham, Kent.[1] On further investigation, East Sussex historian Raphael Stipic found a letter written by Sir Walter Kirke about Lawrence.[1] Military historian Simon Jones then found a copy of Lawrence's book at the REM and started collecting notes to write a biography.[2]

Her story later became part of an exhibition at the Imperial War Museum on women at war. Jones later found that Lawrence's rape allegations were sufficiently compelling to be included in her medical records, held in the London Metropolitan Archives but not available for general access.[2][11]