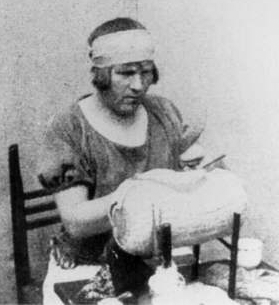 Dora "Dörchen" Richter (1891–1933) was the first known person to undergo complete male-to-female gender reassignment surgery.[1] She was one of a number of transgender people in the care of sex-research pioneer Magnus Hirschfeld at Berlin's Institute for Sexual Research during the 1920s and early 1930s. She underwent surgical removal of the testicles in 1922, followed in 1931 by removal of the penis and vaginoplasty.[2] She is presumed to have died in a Nazi attack on the Institute.

Richter was born to a poor farming family[3] in 1891, named Rudolph, and raised as male. Early in childhood, Richter displayed a "tendency to act and carry on in a feminine way".[4] At the age of 6 years, she apparently tried to remove her penis with a tourniquet.[5] Using the name Dora, she began wearing women's clothing and presenting as female, working under her birth name as a waiter in Berlin hotels during the busy summer season, then living as female the remainder of the year. She was arrested from time to time for cross-dressing, serving time in prison before being released by a judge into the care of Hirschfeld.[5]

With special permission from the police to wear women's clothing, Richter worked with other transgender people as a domestic servant at the Institute for Sexual Research (one of the rare places where a trans person could be employed), where she was affectionately known as Dörchen.[4] In 1922, she underwent an orchiectomy. Dr. Felix Abraham, a psychiatrist working at the institute, published Richter's gender transformation as a case study: "Her castration had the effect – albeit not very extensive – of making her body become fuller, restricting her beard growth, making visible the first signs of breast development, and giving the pelvic fat pad... a more feminine shape."[6]

In early 1931, Richter had a penectomy performed by institute physician Dr. Ludwig Levy-Lenz, and in June that year an artificial vagina was surgically grafted by Berlin surgeon Prof. Dr. Erwing Gohrbandt,[7][6] making her the first transgender woman of whom records remain to undergo vaginoplasty.

In May 1933, with growing Nazi influence in Germany (Hirschfeld had fled the country), a mob of students attacked the institute, and the state authorities then burned its records. Richter is not known to have survived this attack.[5]