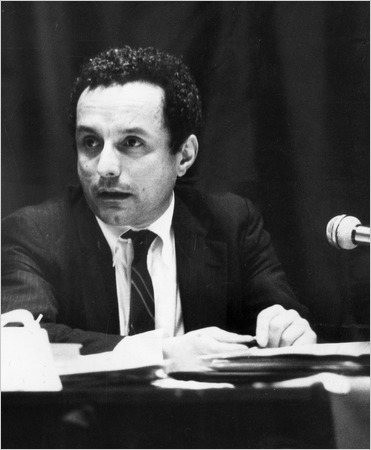 Dennis deLeon (July 16, 1948 – December 14, 2009) was a former New York City human rights commissioner who was one of the first city officials to announce that he was infected with the virus that causes AIDS and who later led one of the nation's most influential advocacy groups for Latinos with AIDS.

deLeon had been human rights commissioner for three years when he disclosed his condition in an Op-Ed article in The New York Times in 1993. At the time, AIDS bore far more of a stigma than it does today, and he said he had been struggling about whether to go public.

"When I contemplated disclosure," he wrote, "I felt that my hope to continue contributing to society as a lawyer and human rights activist was threatened. Would I be evaluated on my merits if I sought to be a judge, a law professor, a law firm member or a governmental appointee?"

In his article, deLeon commended two other officials " Thomas K. Duane, then a City Council member and now a state senator, and Ronald Johnson, the city's AIDS services coordinator at the time " for previously disclosing their H.I.V.-positive status. Until then, deLeon said, only his mother, his partner and Mayor David N. Dinkins had been aware of the situation.

As commissioner, he had seen hundreds of cases in which H.I.V.-positive New Yorkers were shunned by colleagues and employers, he wrote.

"Often, the person is transferred into a meaningless position, passed over for advancement or fired," he added. "Such treatment is often made to appear superficially legitimate but is frequently revealed through investigation to be based on discrimination. Why should I put up with this?"

He would not. A year later, deLeon became president of the Latino Commission on AIDS, an organization that had a staff of two. At the time of deLeon's death in 2009 had a staff of 45 and a budget of $5 million and worked in partnership with 380 organizations around the county. deLeon was its president until a few months before dying.

Under his leadership, the organization created a national Spanish-language clearinghouse for AIDS information, a network of prevention programs in Spanish-speaking churches, and committees with the mission of mobilizing gay Latinos as well as immigrants, women and inmates with AIDS. In 2003, the organization sponsored the first National Latino AIDS Awareness Day, a program that is now held annually on Oct. 15 in 40 states.

Dennis Lawrence deLeon was born in Los Angeles on July 16, 1948, one of two children of Jess and Josephine Munoz deLeon, who were of Mexican descent. His father was a schoolteacher.

After graduating from Occidental College in 1970, deLeon received his law degree from Stanford in 1974. He later became a trial lawyer for the Department of Justice in Washington, then returned to his home state to work for California Rural Legal Assistance, helping migrant workers.

It was a time of heightened ethnic tension in the city. As commissioner, deLeon worked to calm disputes between blacks and Orthodox Jews in Crown Heights and Williamsburg, Brooklyn; blacks and Korean grocery owners in Flatbush, Brooklyn; and Dominicans and the police in the Washington Heights neighborhood of Manhattan.

In 1992, after two black children were attacked by four white men in the Williamsbridge section of the Bronx " they were robbed and their faces were sprayed with a white liquid " deLeon sent in one of the Bias Response Teams he had created two years earlier.

Under deLeon, a human rights commission study found that many hospitals and clinics in the city were refusing to perform abortions on women infected with the AIDS virus. Investigators posing as patients made appointments at 50 health centers but were turned away from 20 clinics when they said they were H.I.V.-positive.

"To have this service denied to these women is really a crime," deLeon said. "No one wants to deal with these folks. We're sending a message to the clinics that this is illegal, and we will pursue you."

He died on December 14, 2009, in Manhattan. He was 61. The cause was heart failure, said Bruce Kiernan, deLeon's companion for 32 years. Mr. deLeon learned he was H.I.V.-positive in 1986 and had grown weaker in his last years, Kiernan said.