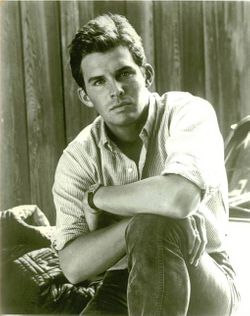 Norman Jay Rambo (November 13, 1941 – March 21, 1994), professionally known as Dack Rambo, was an American actor, most notable for appearing as Walter Brennan's grandson Jeff in the ABC series The Guns of Will Sonnett, as Steve Jacobi in the ABC soap opera All My Children, as cousin Jack Ewing on CBS's Dallas, and as Grant Harrison on the NBC soap opera Another World.

Later that same year, Dack Rambo landed the role of Jeff Sonnett on The Guns of Will Sonnett, and co-starred in the short-lived Gunsmoke spin-off, Dirty Sally, with Jeanette Nolan. During the 1970s and 1980s, he made guest appearances on Marcus Welby, M.D., House Calls, Wonder Woman, Charlie's Angels, All My Children, Fantasy Island, The Love Boat, Hotel and Murder, She Wrote. He also acted out the lead role in Sword of Justice, which lasted for ten installments in 1978-79. Rambo may be best remembered on television for playing Jack Ewing in 51 episodes of the soap opera Dallas from 1985-87, although over 60% of the Dallas episodes that Rambo appeared in ended up being explained away as a dream that the character Pamela Barnes Ewing had been having. Rambo also played Wesley Harper on the 1984 short lived TV series soap opera Paper Dolls.

While working on Another World, Rambo learned that he was infected with HIV in August 1991. He quit the series shortly thereafter and retired from acting. Rambo then publicly announced that he was HIV positive and that he was bisexual, revealing that he had been in a lot of relationships with both men and women since his 20s.[3]