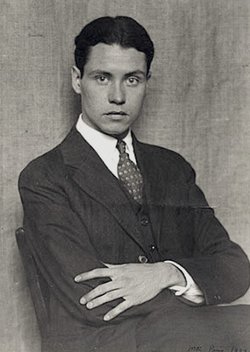 William Eugene McCown (July 27, 1898 - April 23, 1966), better known as Eugene McCown (aka MacCown) among his friends, was a multi-talented artist and world traveler. He was also gay and spent many years "out" in Paris, France during the 1920s where he was "notoriously narcissistic and promiscuous". Back in Paris in the spring of 1926, Klaus Mann met René Crevel, a committed internationalist for perverse reasons: "He spent his days with Americans, Germans, Russians, and Chinese, because his mother suspected all foreigners to be crooks or perverts". Sitting on Mann’s bed, Crevel read out the early chapters of his novel La Mort difficile, with their "venomous" portrait of his mother. On this trip, Mann also met Jean Cocteau ("The hours spent in his company assume in my recollection a savour both of burlesque show and magic ritual"), Eugene McCown, Pavel Tchelitchew, Julien Green, Jean Giraudoux and others.

Eugene was born July 27, 1898 in Eldorado Springs, Missouri to William McCown (1870-1961) and Inez Boyer (1877-1909). After being a student of the Westport High School in Kansas City , he performed for three years from 1917 to 1919, studied journalism at the University of Missouri Sigma Chi (he hosts are a mandolin club) [ 2 ] and had a short professional experience with the newspaper The Kansas City Star before entering the Modern Art School of New York in 1919 [ 3 ] .

Eugene McCown, dressed in a cross suit and bow tie, poses alongside the British writer Normal Douglas (centre) and his companion the Florentine bookseller Pino Orioli (right). The photo was probably taken by Nancy Cunard who had introduced McCown to Douglas during a trip to Florence in 1923.

After a stay in Venezuela where, in Caracas , he performs murals in the mansion of President Victorino Márquez Bustillos [ 4 ] , Eugene McCown leaves for Europe and visits Spain and Italy before arriving in Paris in 1921 where he frequented the artistic and literary bohemia of the Roaring Twenties and in particular Nancy Cunard of whom he painted a portrait in 1923 [ 5 ] , Jean Cocteau who met this "adolescent with long hands, who walks like a panther and has animal eyes "at the Hôtel Welcome in Villefranche-sur-Mer [ 6 ] , and René Crevel, whom he met during the winter of 1923-1924 [ 7 ] , [ 8 ] and of which he became the lover [ 9 ] ; François Buot will accurately reproduce this story [ 10 ] after Crevel had transposed it into his key novel. The difficult death in which the character of Arthur Bruggle is none other than Eugene McCown [ 11 ] . Emmanuel Pierrat notes that McCown likewise deeply fascinates Bernard Faÿ and his younger brother Emmanuel: “Mc Cown is the exemplary embodiment of these American angels who fascinate Bernard Faÿ and, obviously, his younger brother. His loving gifts, no less than his cruel frivolity, seem to merge into a magnetism of which they have been the beneficiaries as much as the martyrs ” [ 12 ] .

In Paris, he made a living by painting and and playing piano at Le Boeuf. According to one of his live-in lovers, composer Virgil Thomson: "He plays jazz on the piano nights (10 till 2) at Le Boeuf, which is the rendezvous of Jean Cocteau, Les Six, and les snobs intellectuals--a not unassuming place frequented by English upper-class, bohemians, wealthy Americans, French aristocrats...He plays remarkably well and is the talk as well as the toast of Paris. He paints afternoons and has recently had a sudden access of financial success.... I take my social life vicariously now…Thru Eugene. I almost never go out. I practice the organ, do counterpoint and write music. I mostly eat alone and seldom see Gene except mornings." Eugene McCown was more a soulmate, an aspiring painter, a charming, breezy fellow, and a fairly fancy jazz club pianist. Eugene would attend the University of Missouri in Columbia, then hang out with Virgil in Paris, stay there until the war broke out, and move to London, where he was launched as a painter by Nancy Cunard. He would also write two published books, "smart novels like the English write," Virgil called them. Eugene McCown at that time must also have been dealing with his homosexuality, though Virgil maintained that, for everyone in his circle, homosexual sex did not begin until they got to Paris in the 1920s. Thomson had some American friends there, including his old Kansas City companion Eugene McCown, who had been bumming around the French countryside. During the early months of 1922, Gene lived with Virgil. Like authentic Paris bohemians, they spent each other's money, wore each other's clothes, shared meals and--it would appear since the room was so small--a bed. Virgil lived meagerly off his quarterly fellowship payments. But Eugene was quite prosperous.

Man Ray took McCown's portraits in 1922. McCown and the photographer both arrived in Paris in July 1921 and lived on Rue Campagne-Première, just a few steps from the Vavin crossroads, in Paris. No doubt they had already met in New York in the Greenwich Village neighborhood. In early 1922 McCown was hired as a jazz pianist at Beef sur le Toit, a new cabaret where Cocteau and his band used to meet. Unfazed, endowed with a fierce humour and magnetism that seduced women as well as men, McCown soon became the darling of Paris.

Rene Crevel's many friends included Gertrude Stein, the composer Virgil Thompson, and the painter Eugene McCown. With the latter, Crevel is known to have had a stormy homosexual relationship from 1924 to 1927; it inspired one of his best and most moving novels, La Mort difficile... published in America, translated by David Rattray, published as Difficult Death (1985). Two years before his mother's death, Crevel published Detours, his first novel, while he was already living openly with the notoriously narcissistic and promiscuous American painter Eugene McCown, a former satellite of Jean Cocteau's circle of young men and a minor disciple of the same so-called neo-romantic school of painters.

La Siesta (c. 1925) is an oil on canvas by Eugene McCown. Some wanted to see in this painting exhibited by Léonce Rosenberg at the Gallery of Modern Effort in 1925 a portrait of the couple formed then by McCown and Crevel. There is no justification for this, neither the facial features nor the chronology of the two young men who will share their first summer only a few months after the exhibition. McCown's work includes the very sensitive influence of André Lhote and his painting La Plage, painted as early as 1920. La Sieste was a great success with critics and amateurs alike and helped launch McCown's career in Paris under Cocteau's protection. The painting fascinated the young American Glenway Wescott, who had just arrived in Paris, that it inspired him to do a long poem entitled A man, a writer, a painter dedicated to McCown and referring to this painting.

In 1927, McCown left his modest studio on Rue Campagne-Première to move into a superb Art Deco triplex at number 1 of Villa Seurat (75014). The building was designed by the young architect André Lurçat (1894-1970) and conferred on McCown's nascent glory the prestige of an established painter. It was in this setting worthy of a Marcel L'Herbier film that McCown hosted the poet Hart Crane and received the All-Paris. The cul-de-sac, located not far from Parc Montsouris, was home to many artists (Henry Miller, Marcel Gromaire, Édouard Goerg, Chana Orloff...). The story of this impasse, remarkable in more ways than one, was recounted in a 1975 France Culture show.

Eugene McCown had a soft spot for English aristocrats. During his many stays in London, organized by the journalist Raymond Mortimer, he mingled with Bright Young Things and was particularly close to Patrick Balfour, 3rd Baron Kinross, who owned an apartment in South Kensington

Examples of Eugene's artwork are hard to find but do exist: New York's Museum of Modern Art (in the archives), portraits, book covers, etc.

His modernist paintings were exhibited in the most important galleries of Paris (exhibitions in Brussels , London and Berlin , prior to 1930, are also mentioned [ 4 ] ) and some are still present in the American collections. Eugene McCown travels to the United States in April 1930 on the occasion of the exhibition dedicated to him, extending his stay in New York to Missouri for family reunions before being back in Paris the following May. He left Paris for London in 1933 to return to New York in 1934.

It appears he spent the next few years painting, with exhibits of his work showing up here and there in New York: an 1937 Exhibition of work by artists of the WPA; an 1938 exhibit at the Whitney Museum of American Art.

After the Second World War, when his knowledge of the French language led him to be found in London as a translator commissioned by the Army Intelligence , his trace in the United States tended to dissolve, apart from his publication of the semi-autobiographical novel The Siege of Innocence (possibly based, in part, on his life) in 1950, translations of books by Georges Simenon then his interview by journalists Robert Byington and Glen Morgan in an art magazine in 1964 where he made no secret of his fight against testicular cancer, a disease which take it to Manhattan in april 1966 [ 14 ] .

The Smithsonian Institute has an unsubstantiated death date of 1975 in San Francisco. It seems highly unlikely that Eugene could have survived another ten years past the interview.