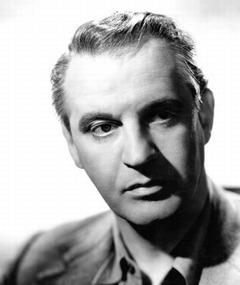 Eric Harold Portman (13 July 1901 – 7 December 1969) was an English stage and film actor. He is probably best remembered for his roles in several films for Michael Powell and Emeric Pressburger during the 1940s.

He started work in 1922 as a salesman in the menswear department at the Marshall & Snelgrove department store in Leeds and acted in the amateur Halifax Light Opera Society.

He made his professional stage debut in 1924 with Henry Baynton's company.[1] In 1924, Robert Courtneidge's Shakespearian company arrived in Halifax. Portman joined the company as a 'passenger' and appeared in their production of Richard II at the Victoria Hall, Sunderland which led to Courtneidge giving him a contract. Portman made his West End debut at the Savoy Theatre in London, in September 1924, as Antipholous of Syracuse in The Comedy of Errors. He was engaged by Lilian Baylis for the Old Vic Company.[2] In 1928, Portman played Romeo at the rebuilt Old Vic. He became a successful theatre actor. In 1933, Portman was in Diplomacy at the Prince's Theatre with Gerald du Maurier and Basil Rathbone.

In the 1930s, he began appearing in films, starting with an uncredited bit in The Girl from Maxim's (1933) directed by Alexander Korda. In 1935, he appeared in four films, including Maria Marten or Murder in the Red Barn with Tod Slaughter. He also made Hyde Park Corner with Gordon Harker and directed by Sinclair Hill; Old Roses and Abdul the Damned.

In 1936 Portman had a stage hit playing Lord Byron in Bitter Harvest. After Hearts of Humanity (1936), he played Giuliano de' Medici in Hill's The Cardinal (1936). Portman made another film with Tod Slaughter, The Crimes of Stephen Hawke (1936), and was in Moonlight Sonata (1937).

He came to the US and played in Madame Bovary on Broadway for the Theatre Guild of America. He also had a small role in The Prince and the Pauper (1937), but disliked Hollywood and did not stay long.

He was back on Broadway in I Have Been Here Before by J. B. Priestley. Portman's last London stage show was Jeannie.

In the semi-autobiographical play Dinner with Ribbentrop by screenwriter Norman Hudis, a former personal assistant to Portman, Hudis relates a claim made often by Portman that in 1937, before the start of the Second World War, he had had dinner in London with Joachim von Ribbentrop (then the Nazi Ambassador to Britain). Portman claimed that Ribbentrop had told him that "when Germany wins the war, Portman would be installed as the greatest English star in the New Europe" at a purpose-built film studio in Berlin.[3][4]

In 1941 he had his first important film role playing Nazi on the run Hirth in Powell and Pressburger's 49th Parallel, which was a big hit in the US and Britain. Portman was established as a star and signed a long term contract with Gainsborough Pictures.[5]

Portman was in Powell and Pressburger's follow up, One of Our Aircraft Is Missing (1942), which reworked the story of The 49th Parallel to be about Allied pilots in occupied Holland. He played a Belgian resistance leader in Uncensored (1942) from director Anthony Asquith, and a German pilot in Squadron Leader X (1943) with director Lance Comfort. Portman was a submarine commander in Asquith's We Dive at Dawn (1943) and a factory supervisor in Millions Like Us (1943) from Launder and Gilliat.[6] He was in another war story in Comfort's Escape to Danger (1943), then was back with Powell and Pressburger for A Canterbury Tale (1944). Portman had the lead in Great Day (1945) with Flora Robson and in the expensive colonial epic Men of Two Worlds (1946).

In 1945, exhibitors voted him the 10th most popular star at the British box office.[7] He maintained that ranking the following year.[8]

He played the bogus Major in Terence Rattigan's play Separate Tables in 1956–57 on Broadway. For this performance, he was nominated for a Tony Award (Best Actor (Dramatic)). In 1958 he appeared on Broadway in a short-lived production of Jane Eyre as Rochester. Portman had better luck the following year in a production of Eugene O'Neill's A Touch of the Poet, which had a long run. In contract, Flowering Cherry by Robert Bolt, with Portman in the title role only lasted five performances on Broadway.

In 1962 Portman was in a stage adaptation of A Passage to India that ran for 109 performances on Broadway.

Near the end of his life he played character roles including Number Two in the TV series The Prisoner, appearing in the episode "Free For All" (1967), as well as films including The Whisperers (1967) and Deadfall (1968), both for director Bryan Forbes. His final film was Assignment to Kill (1968).

Portman was homosexual, although newspapers never reported this during the mid-1950s when homosexuality was illegal in the UK.[9] Newspapers refrained from identifying his sexuality throughout the 1960s when it could still have damaged his career.[10] His partner was actor Knox Laing.[11]

Portman died at age 68 at his home in St Veep, Cornwall on the 7th December 1969 from a heart aliment.[12] He was buried in St. Veep parish church.