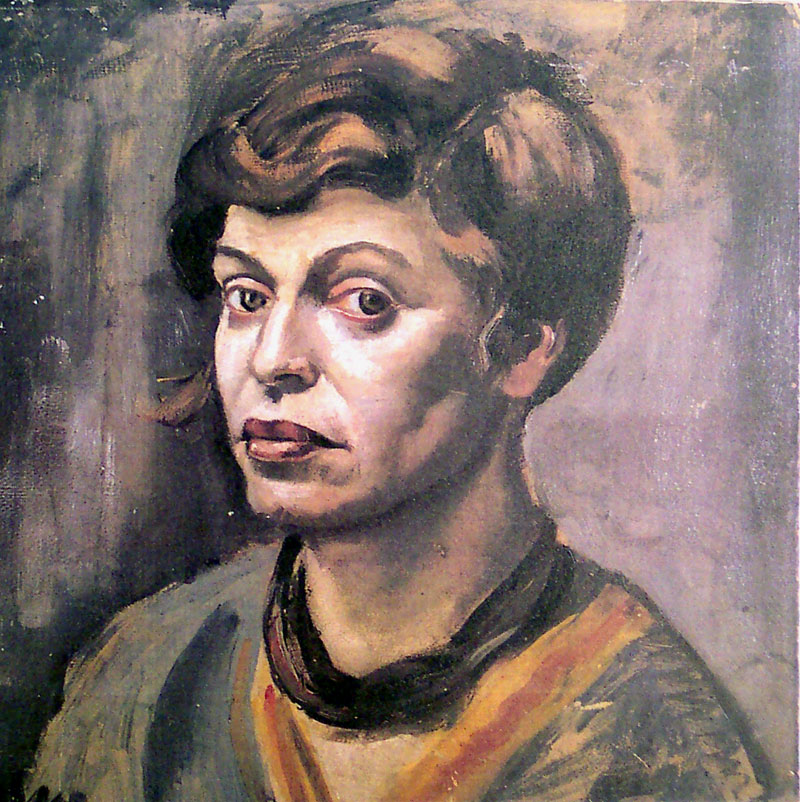 Elfriede Lohse-Wächtler (born Anna Frieda Wächtler; 4 December 1899 – 31 July 1940) was a German painter of the avant-garde whose works were banned as "degenerate art", and in some cases destroyed, by the Third Reich. She was murdered in a former psychiatric institution at Sonnenstein castle in Pirna under Action T4, a forced euthanasia program of Nazi Germany. Since 2000, a memorial center for the T4 program in the house commemorates her life and work in a permanent exhibition. The majority of women in German-speaking Europe associated with innovative arts and literature were married or engaged in significant heterosexual relationships, although few had children. Some lived unconventionally: Hannah Hoch was bisexual; painter Elfriede Lohse-Wichtler was married briefly, then lived highly unconventionally, including a period with Gypsies and, reputedly, female partners. No well-known writer lived openly as a lesbian. Gertrud Kolmar, Annette Kolb, Jeanne Mammen, Milly Steger, Lotte Laserstein, and Nelly Sachs never married.

Elfriede Lohse-Wächtler grew up in a middle-class family, but left at the age of 16 to study at the Royal Arts School Dresden from 1915 to 1918 (fashion, then applied graphics). From 1916 to 1919, she also attended drawing and painting courses at the Dresden Art Academy. She came into contact with the Dresden Secession Group 1919 and became part of the circle of friends around Otto Dix, Otto Griebel, and Conrad Felixmüller. Renting part of the studio of the latter near the Dresden city center she made a living with batiks, postcards and illustrations. In June 1921, she married the painter and opera singer Kurt Lohse, following him to Görlitz in 1922 and in 1925 to Hamburg. The marriage was a difficult one and the couple separated several times in the following years. In 1926, Elfriede Lohse-Wächtler joined the Federation of female Hamburgian artists and art lovers; in 1928. she was able to participate in some exhibitions of the New Objectivity. In 1929, she suffered a nervous breakdown because of financial and partnership difficulties and was committed to a psychiatric institution in Hamburg-Friedrichsberg. During the two months' stay she painted the Friedrichsberg heads, a piece of work consisting of about 60 drawings and pastels, mainly portraits of fellow patients. After her recovery and a final separation from Kurt Lohse (in 1926), she had a very creative phase. She painted numerous paintings of Hamburg's harbor, scenes from the life of workers and prostitutes, and pitiless self-portraits. But despite some exhibitions, sales, and smaller grants, she lived in grinding poverty. Due to financial problems and increasing social isolation, she returned to her parents' home in Dresden by midyear 1931. When her mental state worsened her father admitted her to the state mental home at Arnsdorf in 1932. There she was diagnosed with schizophrenia. From 1932 to 1935 she was still creatively active, drawing portraits and creating arts and crafts. After Kurt Lohse divorced her in May 1935 she was incapacitated due to "incurable insanity". After refusing to consent to a sterilisation, she was denied the permission to go out of the hospital any more. In December 1935, she underwent a forced surgical sterilisation in the Dresden-Friedrichstadt women's hospital on the grounds of Nazi eugenicist policies. After this traumatic event she never painted again. In 1940 she was deported to the former psychiatric institution at Pirna-Sonnenstein (located in the Sonnenstein castle in Pirna), where, on 31 July, she was murdered along with the majority of the other residents as part of the Nazi "euthanasia" program, Action T4. The official cause of death was "pneumonia with myocardial insufficiency". In the years of 1940 and 1941, a total of 13,720 mainly mentally ill or handicapped people were gassed by Nazis in this institution formerly well known for its humanistic traditions.