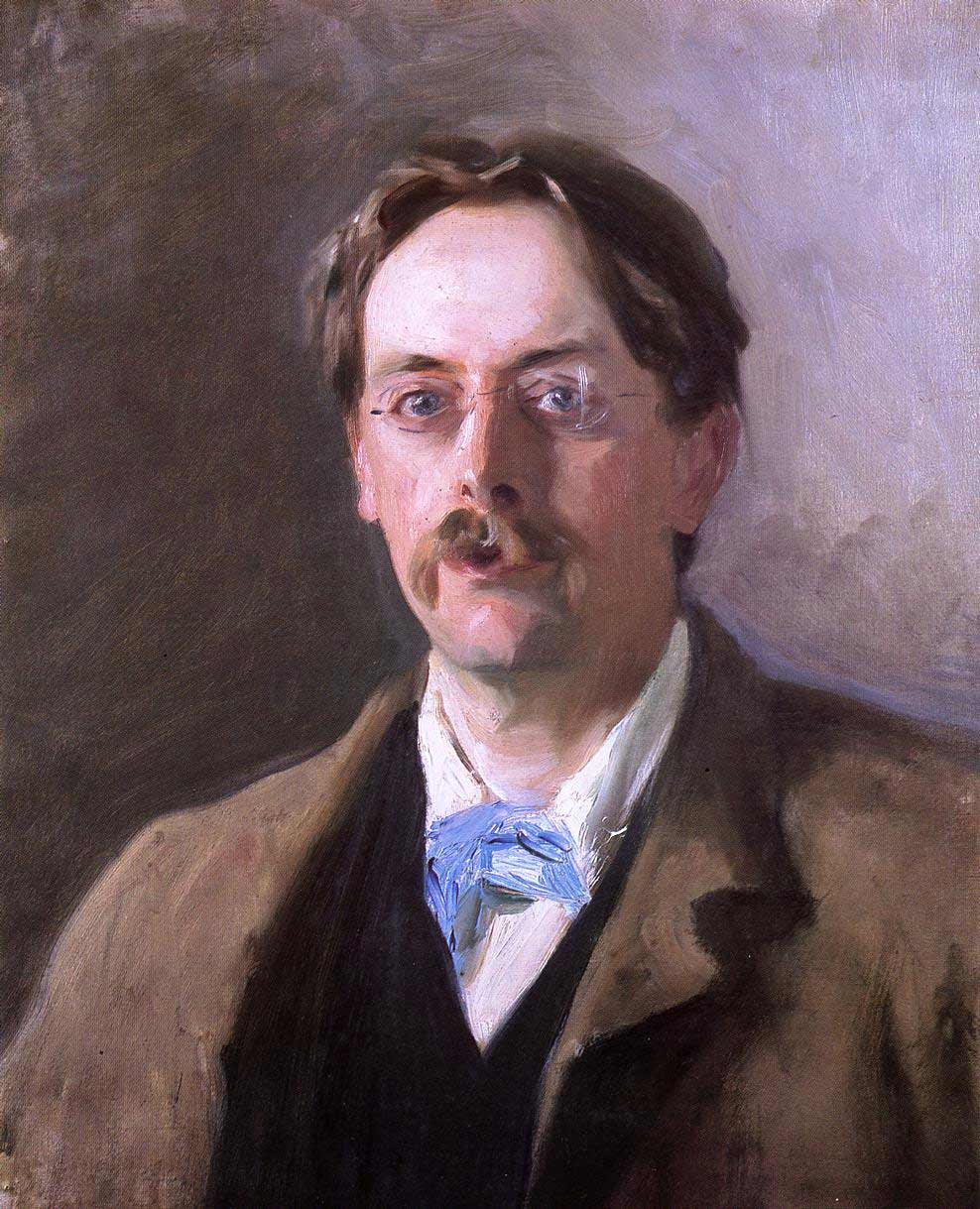 Sir Edmund William Gosse (21 September 1849 – 16 May 1928) was an English poet, author and critic. He was strictly brought up in a small Protestant sect, the Plymouth Brethren, but broke away sharply from that faith. His account of his childhood in the book Father and Son has been described as the first psychological biography. Gosse and the librarian of the London Library organized John Addington Symonds’ papers into a pile in the library garden and set fire to them.

His friendship with the sculptor Hamo Thornycroft inspired a successful career as a historian of late-Victorian sculpture. His translations of Henrik Ibsen helped to promote that playwright in England, and he encouraged the careers of W. B. Yeats and James Joyce. He also lectured in English literature at Cambridge.

Gosse was the son of Philip Henry Gosse and Emily Bowes.[1] His father was a naturalist and his mother an illustrator who published a number of books of poetry. Both were deeply committed to a small Protestant sect, the Plymouth Brethren. His childhood was initially happy as they spent their summers in Devon where his father was developing the ideas which gave rise to the craze for the marine aquarium. After his mother died of breast cancer when he was eight and they moved to Devon, his life with his father became increasingly strained by his father's expectations that he should follow in his religious tradition. Gosse was sent to a boarding school where he began to develop his own interests in literature. His father married in 1860 the deeply religious Quaker spinster Eliza Brightwen (1813–1900), whose brother Thomas tried to encourage Edmund to become a banker. He later gave an account of his childhood in the book Father and Son which has been described as the first psychological biography. At the age of 18 and working in the British Museum in London, he broke away from his father's influence in a dramatic coming of age. 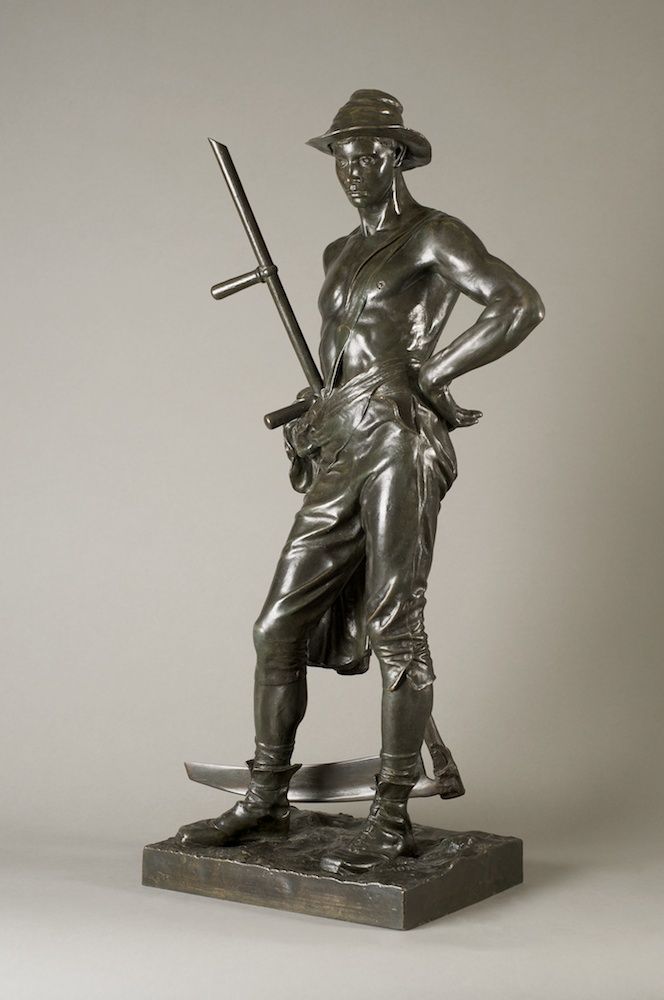 Eliza Gosse's brother George was the husband of Eliza Elder Brightwen (1830–1906), a naturalist and author, whose first book was published in 1890.[2] After Eliza Elder Brightwen's death, Edmund Gosse arranged for the publication of her two posthumous works Last Hours with Nature (1908) and Eliza Brightwen, the Life and Thoughts of a Naturalist (1909), both edited by W. H. Chesson, and the latter book with an introduction and epilogue by Gosse.

Gosse started his career as assistant librarian at the British Museum from 1867 alongside the songwriter Theo Marzials,[3] a post which Charles Kingsley helped his father obtain for him. An early book of poetry published with a friend John Arthur Blaikie gave him an introduction to the Pre-Raphaelite Brotherhood. Trips to Denmark and Norway in 1872–74, where he visited Hans Christian Andersen and Frederik Paludan-Müller, led to publishing success with reviews of Henrik Ibsen and Bjørnstjerne Bjørnson in the Cornhill Magazine.[4] He was soon reviewing Scandinavian literature in a variety of publications. He became acquainted with Alfred, Lord Tennyson and friends with Robert Browning, Algernon Charles Swinburne, Thomas Hardy and Henry James.

In the meantime, he published his first solo volume of poetry, On Viol and Flute (1873) and a work of criticism, Studies in the Literature of Northern Europe (1879). Gosse and Robert Louis Stevenson first met while teenagers, and after 1879, when Stevenson came to London on occasion, he would stay with Gosse and his family. In 1875 Gosse became a translator at the Board of Trade, a post which he held until 1904 and gave him time for his writing[5] and enabled him to marry and start a family.

The Mower was based on a sketch made during a summer boat trip along the Thames with a group of friends in 1882. The party included Edmund Gosse who, as Michael Hatt has argued, was deeply in love with Thornycroft and sent him passionate letters and poems that went "beyond conventions of the expression of friendship, even by Victorian standards."

From 1884 to 1890, Gosse lectured in English literature at Trinity College, Cambridge, despite his own lack of academic qualifications. Cambridge University gave him an honorary MA in 1886, and Trinity College formally admitted him as a member, 'by order of the Council', in 1889.[6] He made a successful American lecture tour in 1884 and was much in demand as a speaker and on committees as well as publishing a string of critical works as well as poetry and histories.

He became, in the 1880s, one of the most important art critics dealing with sculpture (writing mainly for the Saturday Review)) with an interest spurred on by his intimate friendship with the sculptor Hamo Thornycroft. Gosse would eventually write the first history of the renaissance of late-Victorian sculpture in 1894 in a four-part series for The Art Journal, dubbing the movement the New Sculpture.

In 1904, he became the librarian of the House of Lords Library, where he exercised considerable influence till he retired in 1914. He wrote for the Sunday Times, and was an expert on Thomas Gray, William Congreve, John Donne, Jeremy Taylor, and Coventry Patmore. He can also take credit for introducing Henrik Ibsen's work to the British public. Gosse and William Archer collaborated in translating Hedda Gabler and The Master Builder; those two translations were performed throughout the 20th century. Gosse and Archer, along with George Bernard Shaw, were perhaps the literary critics most responsible for popularising Ibsen's plays among English-speaking audiences. Gosse was instrumental in getting official financial support for two struggling Irish writers, WB Yeats in 1910 and James Joyce in 1915. This enabled both writers to continue their chosen careers.[7]

His most famous book is the autobiographical Father and Son, about his troubled relationship with his Plymouth Brethren father, Philip, which was dramatised for television by Dennis Potter. Published anonymously in 1907, this followed a biography he had written of his father as naturalist, when he was urged by George Moore among others to write more about his own part. Historians caution, though, that notwithstanding its psychological insight and literary excellence, Gosse's narrative is often at odds with the verifiable facts of his own and his parents' lives.[8] In later life, he became a formative influence on Siegfried Sassoon, the nephew of his lifelong friend, Hamo Thornycroft. Sassoon's mother was a friend of Gosse's wife, Ellen. Gosse was also closely tied to figures such as Algernon Charles Swinburne, John Addington Symonds, and André Gide.

Another work of his is The Autumn Garden,, which was published in 1908 by the London publisher William Heinemann. This book includes: Proem, Lyrics in the Mood of Reflection, Sonnets, Songs of Roses, Commemorations and Inscriptions, Verses of Occasion, Paraphrases and a final Epilogue in the Autumn Garden. It contains more than 50 individual pieces within it.[9]

He was the literary editor for the 1911 edition of the Encyclopædia Britannica.[10]

Gosse married Ellen Epps (23 March 1850 – 29 August 1929), a young painter in the Pre-Raphaelite circle, who was the daughter of George Napoleon Epps, one of the Epps family of homeopaths. Though she was initially determined to pursue her art, she succumbed to his determined courting and they married in August 1875, with a reception at the house of Lawrence Alma-Tadema whose pupil she had been, visiting his parents, who did not attend the registry office wedding, at the end of their honeymoon in Devon and Cornwall. She continued to paint and wrote stories and reviews for various publications. In 1907, she inherited a sizeable fortune from her uncle, James Epps, the cocoa manufacturer.[4]

Despite a reportedly happy marriage Gosse had consistent, if deeply closeted, homosexual desires. Although initially reluctant to acknowledge these desires, in 1890 Gosse did acknowledge to John Addington Symonds, around the time the latter was working on A Problem in Modern Ethics, that indeed he (Gosse) was attracted to men, thus confirming suspicions Symonds had voiced earlier. "Either way, I entirely deeply sympathize with you. Years ago I wanted to write to you about all this," Gosse wrote to Symonds, "and withdrew through cowardice. I have had a very fortunate life, but there has been this obstinate twist in it! I have reached a quieter time—some beginnings of that Sophoclean period when the wild beast dies. He is not dead, but tamer; I understand him & the trick of his claws."[13][14]