Channing Weir Hare (April 20, 1899 - February 12, 1976) was a portrait artist and was also engaged in the antique business. His clients Included such noted Palm Beach and New York socialites as Phyllis Rhinelander and Alexander Woolcott, comedienne Beatrice Lillie, actress Florence Nash, and authors Booth Tarkington and Kenneth Roberts. He lived at Lakeview House, Palm Beach, FL, with Mountford Coolidge and Hopkins Hensel, and spent the summer months in Ogonquit, ME. Coolidge died in 1954. Lakeview House was featured in the 1961 book 100 Most Beautiful Rooms in America.

Born in New York City, Hare at a young age studied at Art Student League of New York with Robert Henri, George Bellows and William Zorach. During his early life, Hare was associated with his father in the Bennington Scale Works as was his brother, Col. Irving Hare. Both were also active in the local Green Mountain club in Bennington. 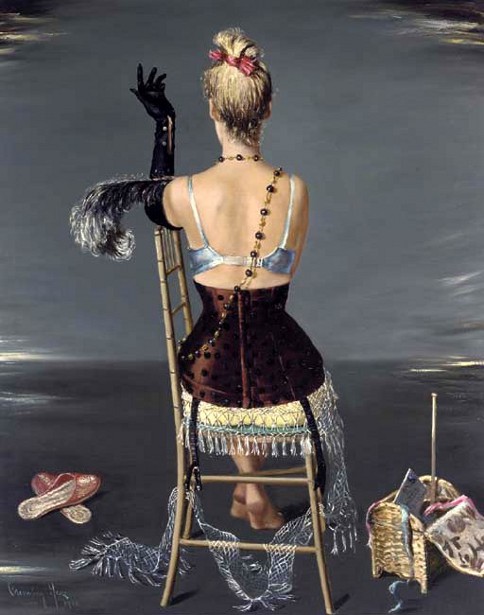 Hare opened a studio in Ogunquit, ME, where he maintained a summer residence. Since the early 1940s he spent the winters in Palm Springs, FL. He was a member of both the exclusive B & T (Bath and Tennis Club) and the Everglades Club,. Referred to as Uncle Bunny by his adopted son Stephen (Stevie) Hopkins Hensel, Hare also owned a large villa, Son Julio, in Majorca (possibly now the hotel Son Julia). In 1952, Hare moved to an apartment on Worth Avenue, the Villas, and sold Lakeview House to Audrey Emery.

In 1929 he married Josephine Brooks Livermore of Newport, RI, to whom he remained married until her death in 1965, even if they lived separate lives since at least the 1940s.

In addition to his avid interest in painting, he was a collector of antiques and from time to time presented portions of his collection to various museums. The Channing Hare - Mountford Coolidge collection of Early American Blown and Pressed Glass is hosted at the Bennington Museum, Bennington, VT. The exhibit is one of the outstanding collections of American Glass in the United States. Channing Hare donated it to the Museum in 1958. It was with Mountford Coolidge (1888-1954) that Hare launched into his bobby of collecting early American glass. During his later years, Coolidge was well-known in art circles both in Palm Beach, FL, than in Ogonquit, ME, where Hare had his summer studio home. The Bennington Museum was chosen by Hare for this donation, as an outstanding regional museum where such a collection would be of special interest and value. Included among the pieces, many of which had been for years at Hare's Ogonquit home, were specimens of Stiegel, Early Sandwich, New Hampshire and Ohio glassware.