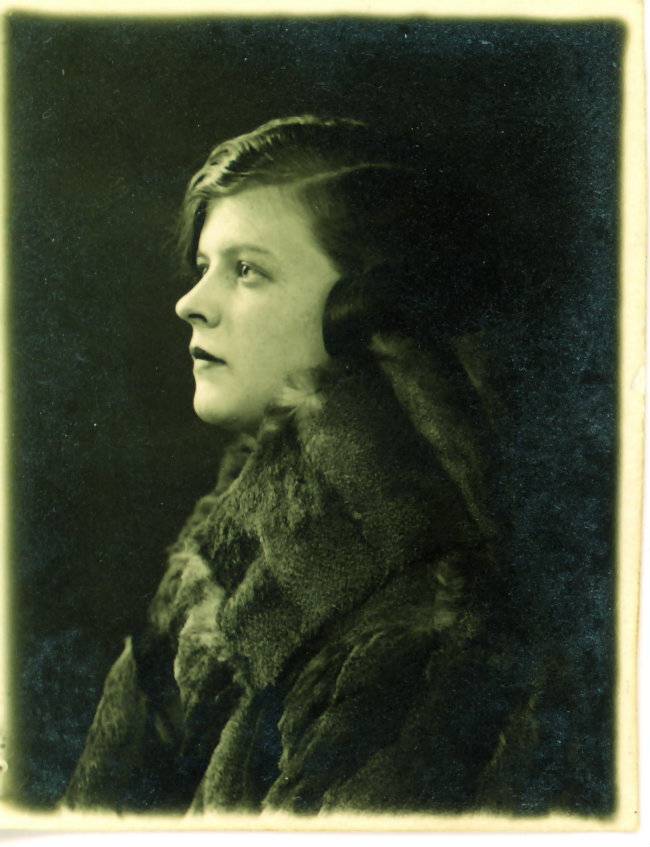 For a while, Kay Boyle lived comfortably as the secretary to Gladys Palmer, heir to the Palmer biscuit company fortune and the Princess or Dayang Muda of Sarawak. Boyle, however, was drawn to a commune outside Paris in Neuilly organized by Raymond Duncan, brother of Isadora Duncan. Boyle's daughter, Sharon, would be cared for at the commune (she was not permitted to live with her mother in Palmer’s home) in exchange for Boyle’s managing the shop on the boulevard Saint-Germain where the togas, sandals, and scarves presumably produced by Duncan’s colony were sold. Harry Crosby often visited Boyle at the shop, episodes that provided Boyle with material for a number of scenes in her fourth novel, My Next Bride (1934). There was gossip that Harry’s frequent visits to the boulevard Saint-Germain were not merely shopping expeditions, and that a ménage à trois or a lesbian relationship between Kay Boyle and Caresse Crosby existed. None of these speculations were ever confirmed, although Boyle dedicated My Next Bride to Caresse partly to dispel suspicion. While not strictly autobiographical, the book sheds light on the early relationship between the Crosbys and Boyle.

Crosby's parents, William Hearn Jacob and Mary Phelps, were both descended from American colonial families—her father from the Van Rensselaer family, and her mother from William Phelps. In 1915, Mary (nicknamed Polly) married Richard R. Peabody, another blue-blooded Bostonian whose family had arrived in New Hampshire in 1635. They had two children, but while her husband was away at war, she met Harry Crosby, who was 7 years her junior, at a picnic in 1920. They had sex within two weeks and their public affair scandalized proper Boston society. After Richard returned from his service in World War I, he returned to drinking; his favorite pastime was to watch buildings burn.[3]:79 Two years later, he granted Polly a divorce, and Harry and Polly were married. They immediately left for Europe, where they joined the Lost Generation of American expatriates. They embraced a bohemian and decadent lifestyle, living off Harry's trust fund of US$12,000 a year[4]:397, had an open marriage with numerous ongoing affairs, a suicide pact, frequent drug use, wild parties, and long trips abroad. At her husband's urging, Polly took the name Caresse in 1924. In 1925, they began publishing their own poetry as Éditions Narcisse in exquisitely printed, limited-edition volumes. In 1927, they re-christened the business as the Black Sun Press.[5]

Caresse Crosby and her whippet, Clytoris

They published early works of a number of avant-garde writers before the writers were well-known, including James Joyce's Tales Told of Shem and Shaun (which was later integrated into Finnegans Wake). They published Kay Boyle's first book-length work, Short Stories, in 1929,[44] and works by Hart Crane, Ernest Hemingway, Eugene Jolas, D. H. Lawrence, Archibald MacLeish, Ezra Pound, and Laurence Sterne. The Black Sun Press evolved into one of the most important small presses in Paris in the 1920s. In 1929, Polly and Harry both signed poet Eugene Jolas' The Revolution of the Word Proclamation, which appeared in issue 16/17 of the literary journal transition. After Harry died, in a suicide pact with one of his many lovers, Caresse continued publishing until 1936, when she left Europe for the United States.

Harry's death was marked by scandal as the newspapers speculated wildly about whether Harry shot his lover or not. Caresse returned to Paris, where she continued to run the Black Sun Press. With the prospect of war looming, she left Europe in 1936 and married Selbert Young, an unemployed, alcoholic actor 16 years her junior. They lived on a Virginia plantation they rehabilitated outside Washington, D.C., until she divorced him. She moved to Washington, D.C. and began a long-term love affair with black actor-boxer Canada Lee, despite the threat of miscegenation laws. She founded Women Against War and continued, after World War II, to try to establish a Center for World Peace at Delphi, Greece. When rebuffed by Greek authorities, she purchased Castello di Rocca Sinibalda, a 15th-century castle north of Rome, which she used to support an artists' colony. She died of pneumonia related to heart disease in Rome, in 1970.