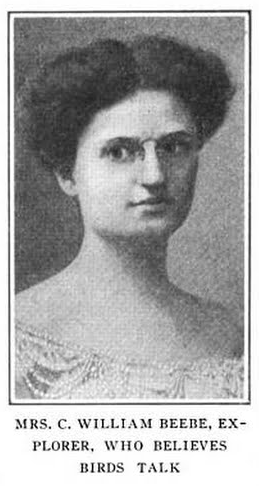 Mary Blair Rice, better known by the pen name Blair Niles (June 15, 1880 - April 13, 1959) was an American novelist and travel writer. She was a founding member of the Society of Woman Geographers. The name Blair Niles was adopted in part from the surname of her late second husband, Robert Niles, Jr.[1]

Blair Niles was the grand-daughter of Sara Rice Pryor and Roger Pryor, and the daughter of Marie Gordon Pryor. Her unique namesake, "Mary Blair," is shared with her mother's sister, Mary Blair Pryor, her cousin Mary Blair Walker Zimmer, and several other women in her lineage. [2] Her grandmother Sara Rice Pryor was also a widely-read author for her chronicling of life in antebellum Virginia. Blair Niles did not have any children of her own.

The first wife of oceanographer William Beebe, Niles also wrote under the name of Mary Blair Beebe. She lived among indigenous peoples in Mexico, South America, and Southeast Asia. In 1923, she published Casual Wanderings in Ecuador. Colombia: Land of Miracles followed in 1924, and Peruvian Pageant in 1937. In these books she linked contemporary culture with the past by exploring history, traditions, and legends. She visited the notorious Devil's Island in 1926 and recorded the life of a prisoner there (René Belbenoit) in her 1928 best selling biography: Condemned to Devil's Island. The international sensation caused by this book led to prison reforms.

Her 1931 book, Strange Brother, was a gay-themed novel (her only work in that genre) set in New York City during the Harlem Renaissance.[3]

In 1944, Blair Niles was awarded the Gold medal of the Society of Woman Geographers.