Annie Montague Alexander (December 29, 1867 - September 10, 1950) was an American philanthropist and paleontological collector. She established the University of California Museum of Paleontology (UCMP), Museum of Vertebrate Zoology (MVZ), and financed their collections as well as a series of paleontological expeditions to the western United States at the turn of the 20th century. She took part in many of these expeditions, gathering a significant collection of fossils and exotic game animals in her own right.

Annie Montague Alexander was born December 29, 1867, in Honolulu during the Kingdom of Hawaii in what is now the Mission Houses Museum. She was the granddaughter of New England missionaries in Maui, part of the Kingdom of Hawaii. Her father Samuel Thomas Alexander and her uncle Henry Perrine Baldwin were founders of Alexander & Baldwin.[1] Her mother Martha Cooke was daughter of Amos Starr Cooke, the founder of Castle & Cooke. These were two of the "Big Five" corporations that started as sugar cane plantation owners and then dominated the economy of the Territory of Hawaii. Her cousins included Henry Alexander Baldwin and Clarence Hyde Cooke who carried on the family businesses, Charles Montague Cooke, Jr. who studied snails (malacology), and architect Charles William Dickey. She attended Punahou School for one year, but in 1882 her family moved to Oakland, California, to get medical attention for her grandfather, and she enrolled in Oakland High School.[1] In 1886 she attended Lasell Seminary for Young Women in Auburndale, Massachusetts. 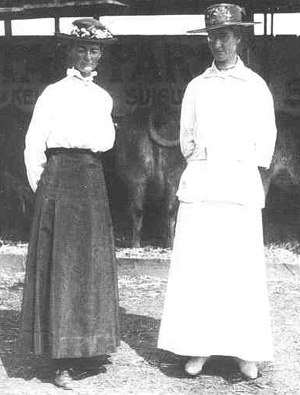 In 1888 she traveled with her family to Paris and studied painting. She returned to Oakland and trained briefly as a nurse, but enjoyed being outside instead. Her father left the business to others and took Annie on a bicycle trip through Europe in 1893, and sailed through the Pacific in 1896. In 1899 she went camping in Oregon and then went with her father to Bermuda.[1] Alexander first became fascinated with paleontology in 1900 while attending a lecture by Professor John C. Merriam at the University of California, Berkeley. She offered to underwrite the entire cost of his upcoming expeditions. She took part in Merriam's 1901 expedition to Fossil Lake in Oregon, and his 1902 and 1903 expeditions to Mount Shasta in northern California. In 1904, Alexander left on a trip with her father and Thomas L. Gulick, son of missionary Peter Johnson Gulick and younger brother of John Thomas Gulick who was an early developer of theories of evolution. The men were looking forward to hunting big game in Africa, while Annie was collecting fossils and taking pictures. Gulick became ill and died August 15, 1904, in Kijabe, Kenya. On September 8 the Alexanders reached Victoria Falls. The next day they crossed the Zambezi river and climbed down the canyon for a better view. While she was preparing to take a picture, Samuel was hit by a boulder tossed down from workers above that crushed his foot.[2] The foot was amputated and her father was buried at the Old Drift cemetery after dying a day later on September 10, 1904.[3] In 1905 she financed and took part in the Saurian Expedition to the West Humboldt Range in Nevada.[4] The expedition discovered many of the finest specimens of ichthyosaur. From April to August 1907 Alexander financed and led a trip to Alaska; the expedition to southeastern Alaska included Alexander, Joseph S. Dixon, Chase Littlejohn, Frank Stephens and Kate Stephens.[5]:1

From 1908 she collaborated continuously in the field with her companion Louise Kellogg.[6][7] She proposed a Natural History Museum at the University of California, offering to support its research and collections. In 1908 she helped finance the newly established Museum of Vertebrate Zoology[8] after the state fell short in its appropriations. At her request, Joseph Grinnell served as its first director until his death in 1939.[1]:118[9] In 1920 when Merriam left the University to become president of the Carnegie Institution, the paleontology department was merged with the geology department, displeasing both Merriam and Alexander. She subsequently helped establish the UCMP and created an endowment for its funding. She also helped finance much of the work of William Diller Matthew and his protégé George Gaylord Simpson. Alexander shared her life with Kellogg for forty-two years. By all accounts, it was a devoted "Boston marriage". Among other activities, the two ran a working farm together; their asparagus was sold nationwide. Alexander continued to finance expeditions and perform field work throughout her life, celebrating her 80th birthday while in the Sierra de la Laguna mountains. She died of a stroke on September 10, 1950, and her ashes were buried at Kawaiahaʻo Church, overlooking her childhood home on Maui.[1]:124 At least seventeen species of plants and animals honor Alexander in their scientific names (such as Hydrotherosaurus alexandrae), and several others are named after Kellogg. Lake Alexander in Alaska is named for her.[5]:174[10]