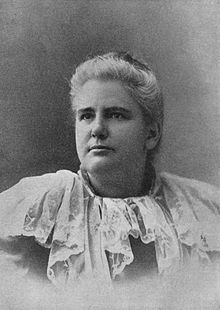 Anna Howard Shaw[1] (February 14, 1847 – July 2, 1919) was a leader of the women's suffrage movement in the United States. She was also a physician and one of the first ordained female Methodist ministers in the United States. Anna Howard Shaw, minister, charismatic orator, and international leader, had a reputation within suffrage circles for her “strong and passionate attachments to other women,” some of which “have broken up in . . . tempestuous fashion.” Shaw described her “abiding love for home and home life” at her country house, Moylan, which she shared with her partner Lucy Anthony. When Shaw fell and broke her foot and Anthony, at the same time, fractured her elbow, Shaw ruefully labeled them “rather a broken up couple.” Anthony called Shaw, after her death, “my Precious Love,” “the joy of my life.”

Shaw was born in Newcastle-upon-Tyne, United Kingdom in 1847. When she was four, she and her family emigrated to the United States and settled in Lawrence, Massachusetts. When Shaw was twelve years old, her father took "up [a] claim of three hundred and sixty acres of land in the wilderness" of northern Michigan "and sent [her] mother and five young children to live there alone."[2]

Her mother had envisioned their Michigan home to be “an English farm” with “deep meadows, sunny skies and daisies,” but was devastated upon their arrival to discover that it was actually a “forlorn and desolate” log cabin “in what was then a wilderness, 40 miles from a post office and 100 miles from a railroad.” Here the family faced the dangers of living on the frontier. Shaw became very active during this period, helping her siblings refurbish their home and supporting her mother in her time of shock and despair. Shaw took on several physical tasks such as "digging of a well, chopp[ing] wood for the big fireplace, [and] fell[ing] trees."

Seeing her mother's emotional suffering, Shaw blamed her irresponsible father for "ha[ving] g[iven] no thought to the manner in which [their family was] to make the struggle and survive the hardships [now laid] before [them]." While her invalid mother was overburdened with household chores", her father in Lawrence could freely dedicate "much time to the Abolition cause and big public movements of his day."

The family's misfortunes grew worse over the years. During the Civil War, her sister Eleanor died giving birth, and her brother Tom was wounded. When Shaw was fifteen, she became a school teacher and, after her older brothers and father joined the war effort, she used her earnings to help support her family. Yet with "every month of [the family's] effort, the gulf between [their] income and [their] expenses grew wider.”

As Shaw matured, her drive to attend college became firmer. After the Civil War, she abandoned her teaching job and moved in with her married sister Mary in Big Rapids, Michigan. While she would have preferred the more lucrative work of digging ditches, she was forced to pick up the "dreaded needle," and become a seamstress.

Her preaching career began when she was inspired by Reverend Marianna Thompson who was the first person who supported her pursuit of an education. Thanks to Thompson's help, Shaw entered Big Rapids High School where the preceptress, Lucy Foot, recognized Shaw's talents and drive. At the age of twenty-four, Shaw was invited by Dr. Peck, a man looking to ordain a woman in the Methodist ministry, to give her first sermon. Shaw hesitated at first because her only previous experience had been “as a little girl preaching alone in the forest...to a congregation of listening trees.” With encouragement from Lucy Foot, Dr. Peck, and her close friend, Clara Osborn, Shaw agreed and gave her first sermon in Ashton, Michigan.

Despite the success of her first sermon, her new found passion to preach received disapproval from her classmates, friends, and family who agreed to pay for her college education only if she abandoned preaching. Despite such continual opposition and isolation from so many, Anna chose to keep on preaching. She was “deeply moved” by Mary A. Livermore, a prominent lecturer who came to Big Rapids. Ms. Livermore gave her the following advice: “if you want to preach, go on and preach…No matter what people say, don’t let them stop you!”

In 1873, Shaw entered Albion College, a Methodist school in Albion, Michigan. Since her family frowned upon her decided career path, they refused to provide any financial support. At that point, Shaw had been a licensed preacher for three years and earned her wages by giving lectures on temperance.

After Albion College, Shaw attended Boston University School of Theology in 1876. She was the only woman in her class of forty-two men, and she always felt "the abysmal conviction that [she] was not really wanted there." This attitude was furthered by her difficulty supporting herself financially. Already running on a tight income, Shaw found it unfair that the "male licensed preachers were given free accommodations in the dormitory and their board cost each of them $1.25 while it cost her $2 to pay rent of a room outside.” Additionally, she had trouble finding employment. Unlike in Albion where she was “practically the only licensed preacher available”, at Boston University there were many preachers who she had to compete with. As she lost money to pay the rent, she struggled to feed herself and felt “cold, hunger, and lonel[y].” Now Shaw started to question whether the ministerial profession was meant for her. In the face of these hardships, Shaw continued on. In 1880, after she and Annie Oliver were refused ordination by the Methodist Episcopal Church, she achieved ordination in the Methodist Protestant Church.

Following her ordination, Shaw received an M.D. from Boston University in 1886. During her time in medical school, she became an outspoken advocate of political rights for women.[3]

Beginning in 1886, Shaw served as the chair of the Franchise Department of Women’s Christian Temperance Union (WCTU). Her task was "to work for woman suffrage and then to use the ballot to gain 'home protection' and temperance legislation."[4] However her focus on temperance subsided as she became more heavily involved in the suffrage movement by lecturing for the Massachusetts Suffrage Association and later the American Woman Suffrage Association (AWSA).

Shaw first met Susan B. Anthony in 1887. In 1888, Shaw attended the first meeting of the International Council of Women. Susan B. Anthony encouraged her to join the National Woman Suffrage Association (NWSA). Having agreed, Shaw played a key role when the two suffrage associations merged when she "helped to persuade the AWSA to merge with Anthony's and Elizabeth Cady Stanton's NWSA, creating for the first time in two decades a semblance of organizational unity within the [suffrage] movement." Beginning in 1904 and for the next eleven years, Shaw was the president of NAWSA. Under her leadership, NAWSA continued to "lobby for a national constitutional amendment granting women the right to vote."

During the early 20th century, Alice Paul and Lucy Burns, NAWSA members, began employing militant techniques (e.g. picketing the White House during World War I) to fight for women's suffrage. They, like other members, were inspired by the success of the militant suffragettes in England. As president of NAWSA, Shaw was pressured to support these tactics. Nevertheless, Shaw maintained that she was "unalterably opposed to militancy, believing nothing of permanent value has ever been secured by it that could not have been more easily obtained by peaceful methods." She remained aligned with Anthony's philosophy that was against any militant tactics. In 1915, she resigned as NAWSA president and was replaced by her ally Carrie Chapman Catt.

During World War I, Shaw was head of the Women's Committee of the United States Council of National Defense, for which she became the first woman to earn the Distinguished Service Medal. She continued to lecture for the suffrage cause for the remaining years of her life.

At an appearance only months before her death at Baylor University in Waco, Texas, Shaw said, "The only way to refute" the argument that America was a democracy and therefore women were entitled to vote was "to prove that women are not people." She ended the speech by urging the women in attendance to become involved in the women's suffrage movement.[5]

Shaw died of pneumonia at her home in Moylan, Pennsylvania at the age of seventy-two, only a few months before Congress ratified the Nineteenth Amendment to the US Constitution.

Shaw built a home at 240 Ridley Creek Rd., Media, during her tenure as president of the National American Woman Suffrage Assn. (1904-1915) and lived there with her companion Lucy Elmina Anthony (1859–1944), niece of Susan B. Anthony, until her death.[6] Anthony and Shaw were together for thirty years, and she was by her bedside when she died.[7]

In 2000, she was inducted into the National Women's Hall of Fame.

The Anna Howard Shaw Women's Center at Albion College "coordinates educational programming that promotes inclusiveness and pluralism and raises awareness of women’s and gender-related issues. Examples include programming on sexual harassment and sexual assault. The most visible event sponsored by the Center is the Anna Howard Shaw Women’s History Month Program, designated each year to honor Dr. Shaw’s memory and highlight an important aspect of women’s lives. Other educational programs are co-sponsored with student organizations that share mutual interests.[10]

"The Anna Howard Shaw Center at Boston University School of Theology promotes structures and practices that empower women and honor diversity. The Center is named after the Reverend Doctor Anna Howard Shaw, a Methodist minister, medical doctor, and suffragist. Ten years after its founding in 1978, the Shaw Center was designated as the women’s center for the Northeastern Jurisdiction of the United Methodist Church."[11]

The Anna Howard Shaw Junior High School built in 1922-1924 in Southwest Schuylkill, Philadelphia is named for her.

A statue of Anna Howard Shaw was erected next to the Community Library in Big Rapids, Michigan, in 1988.[12]

The thirteenth episode of the fourth season of the NBC television comedy series ''30 Rock'', and the 71st episode of the series overall, is named "Anna Howard Shaw Day". The name is based on main character Liz Lemon's hatred of Valentine's Day, which prompts the substitution for the birthday of a leader in the women's suffrage movement.