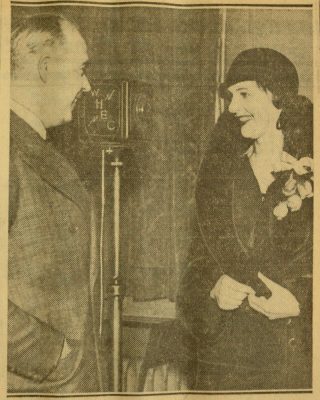 Andrew Jackson "Jack" Warner (January 19, 1884 - October 23, 1965) was the music and drama critic for the Rochester Times-Union from 1918 to 1961 after beginning his career with the Rochester Democrat and Chronicle, and the Evening Times. A waspish, dandified figure, who liked and disliked strongly and vociferously. He detested opera critics and Frank Gannett; he adored cats, his mother, and the former Mrs. Wallis Simpson. A delightful O'Donnell "Don" Iselin's letter of 1937 shows Jack bracing for the arrival of the Windsors in New York, where a check for $150,000 also awaited them. Or so rumor has it. In return for that honorarium, they were to drive only Buicks while in the United States. Iselin glowers: "It would be the height of folly for us quiet folk to get even slightly mixed up with that gang." In addition to his writings on music and drama, A.J. Warner wrote a column in the Times-Union that was preoccupied with European affairs. In 1932 he interviewed Benito Mussolini and had an audience with Pope Pius XI. A.J. Warner was also sent to Europe by George Eastman to find a conductor for the Eastman Theater Orchestra where he engaged Eugene Goosens.

He was the son of Mary Adams and architect John Foster. The inscription on his gravestone reads "Son of John Foster and Mary Adams Warner, from whose life happiness departed on the death of his beloved mother". His mother's gravestone also mentions that "...her great love completely filled the life of her bachelor son Andrew Jackson Warner". John Foster Warner, was born in Rochester and worked as a successful architect in the city. Andrew Jackson Warner, John's father, was the owner of the Lyceum Theater, a major playhouse in Rochester at the turn of the XIX century. In addition to his father, A.J. Warner’s mother Mary L. Adams and his brother John Adams (J.A.) Warner were musicians. His brother gained some press as an organist and pianist. John Adams Warner composed the musical comedy called “Betsy Abroad” staged by, among other, Charlotte Whitney Allen and Clayla Ward. The Warner’s lived in Rochester at 5 Prince Street.