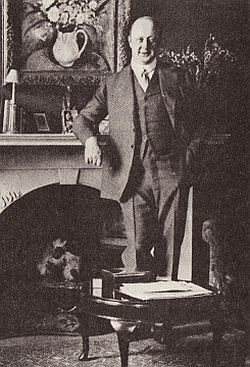 Albrecht Theodor Andreas Graf von Bernstorff (March 6, 1890 - April 24, 1945) was a German diplomat and resistance fighter against National Socialism . He was one of the most important members of the resistance in the area of ​​the Federal Foreign Office and was an outstanding head of the bourgeois- liberal opposition.

Bernstorff worked at the German Embassy in London from 1923 to 1933, where he made a lasting contribution to German-British relations. In 1933 he was temporarily put into retirement by the Nazi authorities - he had rejected National Socialism from the start. In 1940 the National Socialists arrested Bernstorff and deported him to the Dachau concentration camp , from which he was released a few months later. Until his arrest again in 1943, he helped persecuted Jews and was a member of the Solf Circle , a bourgeois-liberal resistance group. Bernstorff established the relationships between the Solf Circle and the Kreisau Circle via Adam von Trott zu Solz . In addition, through his contacts abroad, he was able to establish connections with influential circles for the resistance, which served to prepare the assassination attempt of July 20, 1944 .

After the failure of the “July Plot” and the death of Stauffenberg, over 12,000 people were rounded up by the Nazis and taken to concentration camps. Among those caught was a fascinating individual who was a kind of Scarlet Pimpernel of the European Resistance. Count Albrecht von Bernstorff was connected with a group of anti-Hitler conspirators within the German foreign ministry. (As liaison to the Dutch legation, he had been able to warn the Dutch government about Germany’s planned invasion of Holland in 1940). Like Stauffenberg, von Bernstorff was an aristocrat. All through the war he played a part—and played it well. A stout, balding man, impeccably dressed, he seemed to spend most of his time in cafes, sipping drinks and propositioning young waiters. He was saved from arrest by the eminence of his family and his connections in the diplomatic service. Everyone considered him an effete and slightly ridiculous pederast, harmless and useless. Like the Pimpernel’s foppish disguise, von Bernstorff’s cover was a good one. It helped him avoid suspicion while he went about his main business—running an “underground railroad” that smuggled Jews and dissidents and their property out of German hands and into safety. Peter Hoffman, in The History of the German Resistance: 1933-1945, writes that von Bernstorff “was one of the most courageous opponents of Hitler.”

Eventually, in the aftermath of the July plot, of which he probably knew even if he was not himself involved, von Bernstorff was discovered and interned, first in Dachau, later in Ravensbruck. One survivor remembered him well because, in spite of being treated “especially badly” by the guards and sometimes subjected to “unbelievable torture,” he helped keep the other inmates’ spirits up by such gestures as making them promise to come to a big get-together on his estate after the war was over. He did not survive the camps.

In December 1944 he was transferred to the Lehrter Strasse cell prison in Berlin-Moabit , where he was interrogated by the Gestapo almost every day. At the end of April 1945, Albrecht Graf von Bernstorff was murdered by the SS.