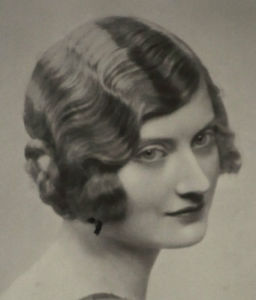 Aileen Plunket or Aileen Sibell Mary Plunket; Aileen Sibell Mary Guinness (1904 – 1999) was an Irish society hostess. She was one of the "Guinness Golden Girls" who were icons in the 1920s. She married well and took an interest in organising parties and in interior design.[1]

Plunket was one of three daughters of Arthur Ernest Guinness. She was part of the rich and well connected Guinness family. As a girl she lived at Glenmaroon in Chapelizod near Dublin. Her father lavished money on his daughter's but his primary interest was in his business.[1]

In 1923 she and her sisters were sent on a world tour in her father's high masted yacht, Fantome II.[2] All three of the girls married well. Her sisters went to live at the mansions of Clandeboye and Luggalla. When she married, Brinsley Sheridan Plunkett, her father bought her Luttrellstown Castle near Dublin.[2]

Over the next 50 years Plunkett redesigned the interiors of Luttrellstown Castle using the service of Felix Harbord. The castle and particularly the dining room still reflect their changes.[3]

Her husband was killed during the war just after they had divorced in 1940.[1]

In 1956 she married the interior designer Valerian Stux-Rybar but this marriage last only until 1965. He was extravagant and Plunkett's lifestyle had to be trimmed after her father died and death duties had to be paid.[1] She sold the castle in 1983 and retired to residences at Elsenham and London. She died on 31 March 1999.[1]